Covert Affairs: like a cross between 24 and 90210. Wait a second ... multiply one by the other and you get 2,165,040. Somewhere within that number lies the meaning of existence, doesn't it? Doesn't it? (*covers bedroom walls with scribbled calculations, causing alarm to friends and family*)


Covert Affairs – Season One (DVD)
Buy the DVD on Amazon 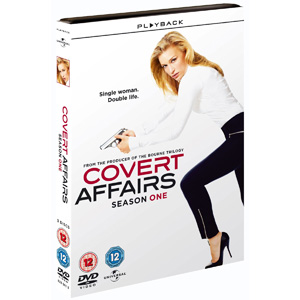 If you look at the bottom of the page, you'll see various other links you might be interested in. If we have little or no other content on the show in question, as with Covert Affairs, I try to choose something else to link to that's thematically similar. In this case I chose Homeland, given that both are about the CIA. But as soon as I hit the preview button, I was struck by the irony of this decision, because you'd struggle to find two shows more dissimilar.

On the one hand, Homeland deals with BIG, SERIOUS, POLITICAL stuff. On the other, Covert Affairs ... well, doesn't. It's a frothier take on life inside the agency. A bit like if the characters of The OC were suddenly all dragooned into the field to do high-tech surveillance work.

Obviously, you're thinking, that would be incredible, and you'd watch that from dusk till dawn every day through a Haribo-fuelled fug. I wouldn't advise against it necessarily, but I'd say you could find more substantial viewing material. 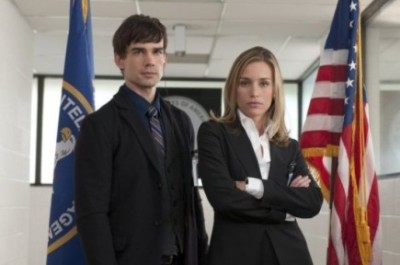 A typical day at the CIA: stand in front of the American flag for a bit, then lunch.

Covert Affairs focuses on Annie Walker (Piper Perabo), who signs up for the agency on the back of one of those holiday love affairs that's all misty-lensed runs on the beach, laughing like goons in hammocks and pirouetted embraces in bikinis. The man she's met mysteriously disappears soon afterwards though, and once she joins up with the agency we soon discover he's a rogue agent, and her new employers don't want her to know about it.

It's a good setup, one of those ones that means we know there's a showdown coming at some stage. From this point on the episodes most closely resemble Fringe, with a little quirk of intrigue in each week's mission.

Annie's a good female lead, if a little too redolent of Sydney Bristow in Alias, but the writing - and perhaps Perabo's character choices at times - mean she often comes off like a spineless schoolgirl when dealing with the office politics, of which there are a lot. Consequently, when her back's against the wall in the field and she reacts like a badass, it doesn't quite ring true.

Certainly none of this makes Covert Affairs a grind to watch: it zips along at a fair pace and never drags, but you'll find yourself wanting more. For a hungover Sunday with nothing else to do, though? You could do a lot worse. 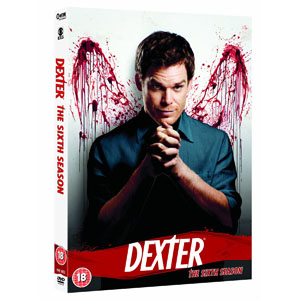 Lip Service – Series One DVD
Braquo – Season 1 & 2 DVD & Blu-ray
More:  Covert Affairs  Piper Perabo  DVD Weekly
Follow us on Twitter @The_Shiznit for more fun features, film reviews and occasional commentary on what the best type of crisps are.
We are using Patreon to cover our hosting fees. So please consider chucking a few digital pennies our way by clicking on this link. Thanks!