This week's big DVD release is Falling Skies! What do you mean you already know? This DVD weekly isn't THAT late. Oh, you ordered it on Monday and it has already arrived? Ok, yeah, this is pretty late.


Falling Skies – season one (DVD)
Buy the DVD on Amazon 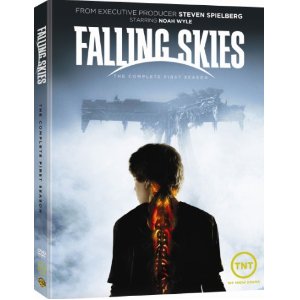 Aliens are brilliant, aren't they? You can kill them, befriend them, have sex with them or get enslaved by them and no one really cares whether they live or die or get injured because they're only aliens. They're the story-telling equivalent of a blank canvas. Need one to slaughter the population of a small town? Well, this one can shoot lasers from its nipples and... er... pisses napalm. How? It doesn't matter. ALIENS.

And this is pretty much the only reason why Falling Skies succeeds at being an exciting show. Rather than retell an alien invasion story we've all seen a hundred times before, this starts off post-apocalypse: the aliens have already invaded and won, wiping out 90% of the human population. Presumably this leaves behind the 10% that didn't greet each extra-terrestrial with a gleeful hug and questions about glowing fingers and flying bicycles.

But this means that there are a lot of aliens roaming the earth and, just like any other US show hoping for longevity, Falling Skies isn't showing all of its cards any time soon. Why are the aliens here? Are they harvesting the planet for food and energy or has it all been a misunderstanding and they were really only trying to extend an invitation to an intergalactic disco party on Neptune? With each episode, just enough new information is teased to keep you invested and thankfully, unlike with Lost, you get the impression that the truth IS out there and it's only matter of time before their entire fiendish plan/party invite is revealed. 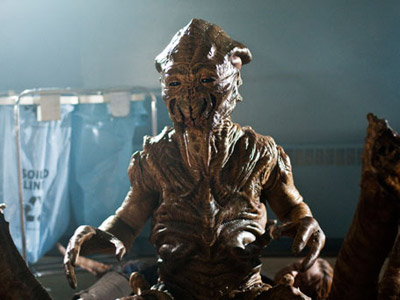 There'll be crisps and dip, all served out of the crushed skulls of your friends and family

The bad news for fans of gory tentacle horror porn though is that Steven Spielberg is on executive producing duties. This means that, even though he brings with him the big bucks allowing for explosions and nifty CGI, the show is also filled with heartwarming stories about "family" and "having a strong sense of community". It isn't enough to show a group of misfit soldier-wannabes out killing ETs, we have to be subjected to saccharine displays of sentimentality and moral preaching so, in each episode, characters can say things like "This is what we're fighting for - it's what separates us from them" and "if we forget our humanity, then we have already failed".

In this regard, the show falls into easily accessible clichés. Our resistance group of survivors (who call themselves the 2nd Massachusetts in a bid to make themselves seem important) are led by a recovering alcoholic mourning his loved ones and consist of Untrustworthy Loose Cannon, Cute Dr Love Interest, Small Boy Growing Up Before His Time and a whole host of background no faces who'll never contribute any significance to the show. Of course, Noah Wyle is the main hero; an outstanding beacon of virtue and incorruptability who never makes a wrong decision, and spends far too much time protecting his three sons than bazooka-ing some insectoid skitter's head off.

That said, the clichés work. They give us an immediate 'in' to the characters, allowing the show to concentrate on the mysterious alien technology and presenting a realistic portrayal of how a society would work post alien attack. And if that's not enough to keep you watching, there's always the possibility that, when the ratings start to dip, one of the aliens will shoot laser from its nipples.