This week's DVD weekly is pretty poor; releases aren't so much scraping the bottom of the barrel as they are wearing a hole in the floor underneath it. I guess TV production companies the length and breadth of the country realise we're all saving our money to buy gigantic pancakes this week. 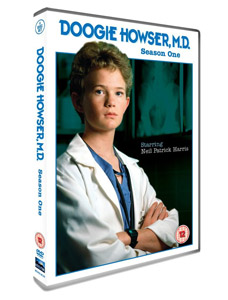 Neil Patrick Harris played the child genius/doctor, as he reminds us every second Tuesday.

Doogie Howser, M.D. was huge in America in the early 90s, but I really don't remember it being shown over here, so all I know is what popular culture tells me about it. So - Doogie Howser was a child prodigy who became a surgeon at around 15, having graduated college at 9ish and maybe he had a friend who wasn't as smart but like skateboards or had a ghetto blaster. He lived with his parents, which was hard because he had really tough shifts to work and. and. and?

Right. So there's not a lot I know first hand about the subject matter, but I do know that it was created by Steve Bochco who created LA Law and NYPD Blue, and David E Kelley who created Ally McBeal. So it was probably gritty and quirky, and featured a lot of synthpiano scene changes.

Philip Seymour Hoffman, sorry, Danny John Jules, wait... Neil Patrick Harris - that's the one - now almost universally known as How I Met Your Mother's Barney Stinson, managed to parlay his success as a diddy doctor into a stellar career in grown-up showbusiness. He's hosted the Tonys, he's in films and he is star of the best musical web series ever created, Doctor Horrible's Sing-Along Blog.


If you had a TV between the years 1999 and 2006, you surely must have seen at least one episode of tremendously long-running grim women's prison drama Bad Girls.

Set in G wing of Larkhall Prison, Bad Girls gave absolutely no insight at all into what it would be like to be in jail. Don't get me wrong, I'm sure it's pretty freaking grim and dramatic being in jail, but I imagine there is significantly less plotting, murdering and, frankly, guard/prisoner lesbianism than in one series of Bad Girls.

The series has been available to buy in various box sets from 2001, but now Shed Productions are kindly releasing the series one by one, just in case you like series 1-3 and 5-7 but think 4 and 8 are shit.

In Series 7, evil Jim Fenner has been jailed for the murder of Shirley off of Eastenders (Spoiler Alert). Over the course of the first few episodes, he gets released, promoted, and murdered. Girls have massive cat fights and the lovely, previously light-hearted Two Julies come over all Corporal Pike and get a bit mentalised.

I started off writing this review thinking that Bad Girls was a trashy TV show that was inexplicably long running, but I remember now just how much I enjoyed the first few series and while it was trashy and inexplicably long, it really wasn't all that Bad. Girls.

I'm surprised though that there wasn't a Children in Need special edition "Larkhall to Candleford", with all the women from the post office and those two from the dress shop being done over by screws. For charity! 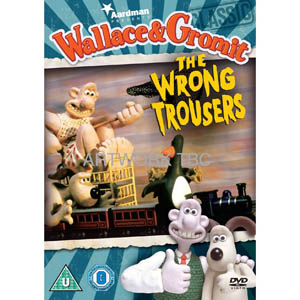 I really don't understand this release at all. Originally shown in 1993, The Wrong Trousers was Wallace and his faithful companion Gromit's second outing for Aardman Animations. Since then, it has been released on VHS or DVD more often than the mechanical rabbit at Wimbledon Dog Track.

In all seriousness, it's been released around 5 times and would surely be a more sensible release for 2013 - it's 10th anniversary.
It's also hardly hot on the heels of any other Aardman Animation merchandise, bearing in mind The Pirates! In an Adventure with Scientists isn't out until the end of March, and that Uswitch recently took a giant shit on Creature Comforts.

Where's the effort? It doesn't even look like it's talking!

Whatever the reason, The Wrong Trousers is being released this week and in case you weren't watching every Christmas and Easter since 1993, I'll fill you in on the plot.

Wallace rents out the spare room to an evil penguin. He also builds Gromit some robot trousers for his birthday, in order to have Gromit do more chores. Gromit takes a dislike to the evil penguin, even more so when the penguin (I've forgotten his name, and I'm not looking it up) gets well chummy with Wallace. And turns out to be a nefarious thief. Dun dun duuuuuun.

There is one of my favourite pieces of stop-motion animation of all time in this short film; Gromit speeding through the house on a toy train, throwing the track down in front of himself as he hurtles under tables and round corners. It's flipping brilliant.

I'd show you a clip of it, but then why would you buy the DVD?

River Monsters Series 2 DVD
Nature's Weirdest Events DVD
More:  DVD Weekly  Neil Patrick Harris  Doogie Howser MD  Wallace And Gromit  Bad Girls
Follow us on Twitter @The_Shiznit for more fun features, film reviews and occasional commentary on what the best type of crisps are.
We are using Patreon to cover our hosting fees. So please consider chucking a few digital pennies our way by clicking on this link. Thanks!