This week's DVD releases are so bloody good, I forgot to stop watching them and missed my deadline. And the clocks went forward which, like, confused me. 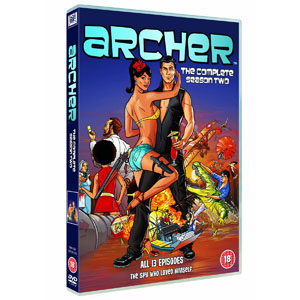 A long, long time ago in the dark recesses of 2011, we ran a review of a little known and very adult cartoon by the name of Archer. Now, a mere 14 months later, season two of that same show is finally being released on DVD in the UK, and not a moment too soon. It really is one of the finest comedies on TV that's purely for grown-ups; a heady cocktail of the hilarious dysfunction of Arrested Development, mixed with the espionage of Mission: Impossible, pushed through a sieve made of comic books and dusted with H. Jon Benjamin's glorious and inimitable voice acting.

Good luck watching this then doing ANYTHING else for the next two hours.

For their second trip out, Sterling Archer and the team at ISIS (the poorly funded International Secret Intelligence Service) find themselves fighting Russians, Archer's arch nemesis, and most deadly of all, their raging libidos. ISIS is a sexual harassment officer's wet dream, if they were allowed to have such things.

If you thought working with your mother would be difficult, imagine how you'd feel when you realised you were working with her to recover a sex tape she made with your (possible) father. Again.

That's just another day at the office for Archer. Other days' activities include being targeted by Cuban hitmen, abusing your valet and (possible) father, bedding all manner of voluptuous llllladies and drinking all the scotch in the northern hemisphere.

This cartoon isn't "for adults" the way South Park is for adults; it's genuinely suggestive and edgy and grim. Lots of people get mangled, shagged and kneecapped. It's brilliant.

Don't borrow it, certainly don't steal it... but damnnit, I'd be happy with you begging for it, if that's your bag.

Raising Hope - Season One (DVD)
Buy the DVD on Amazon 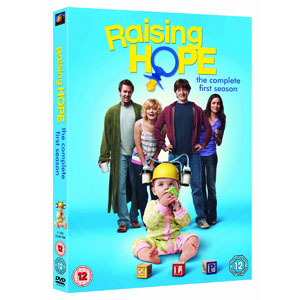 Clearly this site is having a huge effect on the UK DVD release market. Only 16 months after we broke the story that Raising Hope was funny, they've gone and released season one on DVD. 16 months! That's power.

The Chances are full-on white trash, Burt and Virginia having taken advantage of Virginia's grandmother's dementia in order to live in her house. Virginia is a maid and Burt runs his own pool and yard-cleaning business, not that there's anything wrong with that - what I'm getting as is they're not exactly overachievers. Their son, Jimmy, is a layabout who works with his dad and does not-much else. That changes when a chance one-night stand with a serial killer results in a tiny baby girl and a host of responsibilities.

From the makers of My Name Is Earl, Raising Hope follows a similar theme; no-goodniks learn to be better people through friendship and handy half-hourly moral lessons. And there's the same warm feeling around this sitcom as there was to its predecessor - it's got a lot of heart, it's funny and you really root for the Chances to get that one break that might change their lives, because they're not just raising baby Hope, they're raising the hopes of poor people with prom-night babies everywhere. And that's just lovely. 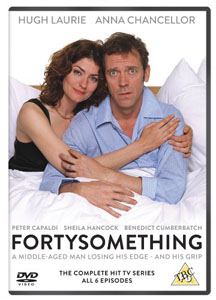 Originally shown on ITV in 2003, this DVD has been released a mere nine years later due to 'popular request'. By that, please read 'hyperventilating fans of Benedict Cumberbatch who have memorised Sherlock and need more'. Those crazy Cumberbitches really really love that man.

Fortysomething stars Hugh Laurie as Paul Slippery, a GP having problems with his wife (the original Duckface, Anna Chancellor) and three sex-mad sons, one of whom is played by a young Benedict Cumberbatch (*pause for screaming and screen clawing*).

I vaguely remember watching this when it was on, or at least watching the first or third part of the six-part mini-series, but at nine years ago I'm coming up dry for witty observations or anything one might want to see in a review.

Since it was shown, Cumberbatch became Holmes, Laurie became House (based on Holmes) and Peter Capaldi learned more inventive swearing than could be found in a whole slew of Viz editors' homes. HOMES!!!

If you know a Cumberbitch, or anyone who enjoys bawdy ITV comedy, then
rush straight out to HMV and buy it. (Other stockists are available. I think.)

Dirk Gently DVD
Return of the Man from U.N.C.L.E DVD
Keeping Up With The Fucking Kardashians - season 2 DVD
More:  DVD Weekly  Archer  Raising Hope  Fortysomething  Hugh Laurie  Benedict Cumberbatch
Follow us on Twitter @The_Shiznit for more fun features, film reviews and occasional commentary on what the best type of crisps are.
We are using Patreon to cover our hosting fees. So please consider chucking a few digital pennies our way by clicking on this link. Thanks!