DVD weekly: the good, the bad and the fabulous 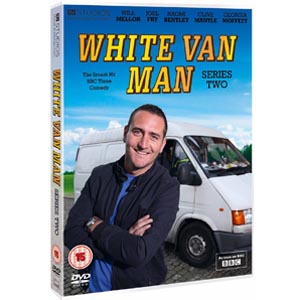 White Van Man is not that bad. Now there's something I never thought I'd write.

I've been using White Van Man as shorthand for crappy pieces of low-budget comedy dross, when all that time I should have stuck to the original crapgasm "Two Pints of Lager and a very long title". For one thing, White Van Man doesn't have a laughter track; I'll repeat that: it doesn't have a laughter track. I would put good money on BBC Three having run trailers with laughter tracks on them, but as it happens, there isn't one. To my mind, that instantly elevates it above complete waste of airtime.

If, like me, you pre-judged the show which ended its second series last week, and probably won't ever watch it anyway, then you probably won't know that it's written by one Adrian Poyton who wrote a rather excellent play about the life of Graham Chapman. This means the standard of jokes doesn't simply have Will Mellor in a vest touching his cock. I know, I was amazed too.

Will Mellor is in it as Ollie the eponymous Man with a Van, that is true, but he always gets a pass from me for being Jambo in Hollyoaks (Best Soap EverTM). White Van Man also stars Joel Fry who it took me AGES to place and turned out to be one of the guys in 'Massive', another BBC Three sitcom from 2008 which was ... okay? I think. He plays Darren, Ollie's lackadaisical assistant. Georgia Moffatt-Tennant rounds out the cast as Mellor's love interest and that's all I'm saying about her because I'm still pretty angry with her for being gorgeous and talented and marrying David Tennant.

White Van Man's ratings have dropped dramatically over the course of the two series, but of course the ratings probably don't take into account iPlayer and the fact that everyone was waiting with baited breath for the DVD to come out. Yes, I'm sure that's what it was. If you like BBC Three sitcoms, then this is the DVD for you. If you like being mildly more amused than you would be by watching clips of cats in boxes on YouTube.

One Night (DVD)
Buy the DVD on Amazon 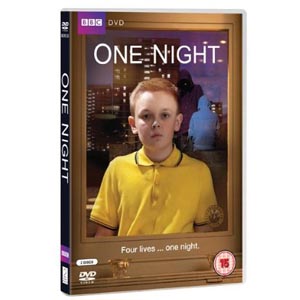 You will probably recognise this DVD as the series just finished showing on BBC1 on Friday, having aired one episode a weeknight all last week.

Revolving around a gang-related murder, it tells the tale of One pretty eventful and utlimately tragic Night from four points of view and gives each perspective its own hour-long episode. Episode one was very strong, showing the night's events from desperate kitchen salesman and tightly-wound worrywort Ted's point of view and putting such a weight behind his tale that the second episode (young love and rebellious daughters) felt wobbly and pasty in comparison. This led to me not watching the rest of the series, which I'm a little sorry for. Having said that, not only is the DVD out now (at all good DVD stockists), but the series is still on iPlayer for the next few days at least.

I also really tried very hard to take it seriously, because of all the seriousness therein, but was rendered useless by my brain ear-worming M-People's 'One Night' repeatedly to the point where I spontaneously burst out a Heather Small impression in the office. Thanks, BBC.

I'd recommend watching it on series catch-up, and also I'd definitely not recommend buying it as an Easter gift for anyone. It's not cheery at all, and isn't that what Easter is all about? (*checks*). Wow. No.

Baywatch - The Complete Season 6 (DVD)
Buy the DVD on Amazon 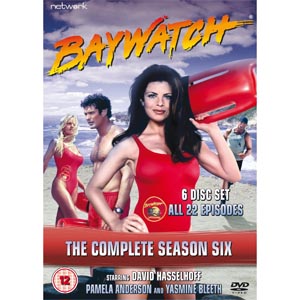 Season six of Baywatch was surely a banner year for crazy drama storylines. Not only was it the year where the lifeguards (that's correct, the beach and sea lifeguards) saved a blind girl from a fire in the woods, and rescued people from an OIL RIG collapse - seriously, oil rigs are like a mile out to sea; who's watching the folks on the beach?! - but it's also the series where Hulk Hogan, Randy Savage and Ric Flair pitched up for a charity wrestling match/TV show crossover episode.

Baywatch is clearly mental, but there was so much more to it than people running slowly. Fine, not THAT much more; but it was essential Saturday night viewing back when Saturday night viewing wasn't solely about paying a quid to vote for someone you don't know to do something that has no bearing on your actual life. Families took their dinner into the living room, ate off of trays on their knees and watched Mitch, Stephanie, CJ and Hobie get up to all kinds of shenanigans from 1989 to 1999. (Well, probably not so much after 1997 really. It got a bit silly.)

It can't exactly be credited with launching many stellar careers, but there was a time when Yasmine Bleeth, David Chokachi and Erika Eleniak were poorly pronounced household names, and I wouldn't be at all surprised if there were thousands of people up and down the country avidly collecting these DVD boxsets as they're released. And not just for the jiggly boobs. (Anderson's, not Hasslehoff's.)

Those Who Kill: The Complete Series DVD
Private Practice: Season Four DVD
More:  DVD Weekly  White Van Man  One Night  Baywatch
Follow us on Twitter @The_Shiznit for more fun features, film reviews and occasional commentary on what the best type of crisps are.
We are using Patreon to cover our hosting fees. So please consider chucking a few digital pennies our way by clicking on this link. Thanks!