Hey, it's that thing about the girl who's in love with a vampire. No, no - the OTHER thing. Nope - not that one either. The OTH - oh, just read the title. 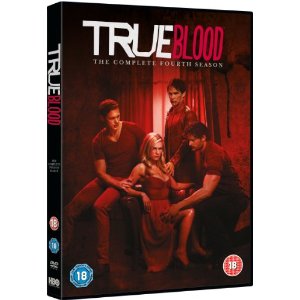 While all the young kids and tweeny-boppers are jacked up on Twilight Diaries or whatever, us gore-lusting adults have to turn elsewhere for vampire kicks - and the show that still offers that is True Blood. With enough blood and explicit sex to make the BBFC rethink its classification for Caligula, True Blood is still the go-to for horrific supernatural shenanigans. And they keep pushing those televisuals boundaries; this time with scenes of rape and incest. Take that, Edward Cullen-Pattinson!

And, then there's the big new bad in this series: witches. Or more importantly, 'necromancers' - magical warlocks with the ability to control the dead. And vampires are technically dead. You can see where this is going.

It's a worthwhile adversary in a show that is fast running out of mythical villains. After already introducing vampires, werewolves, shape-shifters, demons and faeries (spelt that way for extra authenticity), there's always a problem with escalation in this kind of show. While a witch with the power to control the vampires is a genuinely interesting threat, it's only a matter of time before True Blood follows in the footsteps of so many supernatural shows before it and brings angels and satan into the saga. Or at least a merman.

Luckily then, this is the first time that the show has been allowed somewhat of a reboot - a year has passed, instead of the usual 'carry straight on from the last series', which allows for the characters to be in a new place. Jason is now inexplicably a sheriff, Andy is addicted to V, Hoydt and Jessica are struggling to live together and, most importantly, Bill is King of the Vampires. Somehow. Oh, also, while Sookie has literally been away with the faeries for 12 months, Eric has bought her house in an attempt to have sex with her. Spoilers: it works. 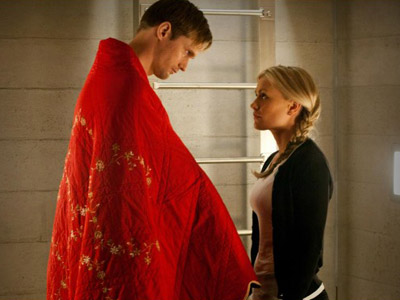 Take note: Wearing nothing but a blanket also helps

Overall, the break in timeline really helps the show. Whereas the third series started to stagnate - seemingly resorting to shock tactics in a bid to remain controversial (Bill's mid-intercourse head-twist, anyone?) while the central relationships and drama grew increasingly ridiculous - this fourth series breathes new life into the show just as rigor mortis was about to set in.

Despite Jason being held hostage and repeatedly raped, Sam connecting with a new group of shape-shifters and Lafayette, Jesus and now-lesbian Tara being inducted into a witch's covenant, it takes Eric losing his memory to really reanimate the show. Watching the once powerful, all-commanding vamp reduced to a wet-behind-the-ears, eager beaver is refreshing; seeing him apologise to Sookie for killing a guy like a schoolboy in trouble is outright hilarious.

And then there are the usual shocks and cliffhangers that leave things tantalisingly set up for the forthcoming fifth series. If the show is in danger of becoming staid and predictable, it's good to see that the producers clearly aren't scared of taking risks and shaking up the formula. Hell, we might even finally get to see that merman.