DVD weekly: we are the BBC and we must have your money

It's time for more spurious assumptions about the week's DVD releases with little or no basis in researched fact. Hey, someone's got to do it. Whether or not it should be us is another matter. 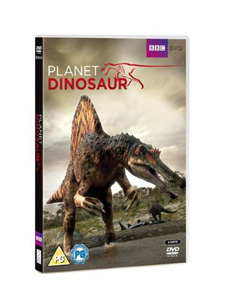 Another fact, which I think I saw on the BBC's marquee hey-look-at-us-we-can-do-CGI-too documentary Planet Dinosaur, but it could just as easily have been the Jurassic Park DVD extras, is that Ross Gellers have now figured out what colour dinosaurs were. It is ... (*drumroll*) ... sort of greenish-brownish. So, sort of lizardy colour. Like lizards.

Momentous revelations like these aside, Planet Dinosaur fizzled out a bit for me. The addition of John 'Gravitas' Hurt as narrator was a masterstroke, but otherwise it seemed a little heavy on graphical accuracy (boooooriiiing) and light on stories. Tell me I'm missing the point of documentary-making if you like, but compare it with Attenborough's BBC animal/nature documentary Life from a couple of years ago. It presented the behaviour of animals in narrative terms: a group of fascinating little vignettes full of quick conflict and resolution and immensely satisfying.

Planet Dinosaur, on the other hand, failed to make you care about the dinosaurs as characters. This sounds ridiculous, of course. It's not like I'm saying they should've made the Allosaurus's violent outbursts more sympathetic with a bit of backstory showing how cold and distant its father was, or fleshed out the sense of racial injustice with a scene in which the Majungasaurus is refused entry to a Spinosaurus-only tennis club, but ... no, wait, that's exactly what I'm saying. That would've been brilliant. 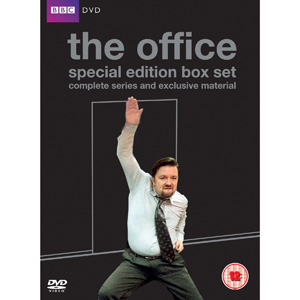 Wait, it's been ten years since The Office was on? And Gervais/Merchant are only just about to premiere their third TV show? What the fuck have they been doing? Other than the podcasts. And the films. And the Karl Pilkington show. And offending people on Twitter. Yeah, OK, quite a lot. It just seems like they would've done more TV in that time, given that it's their natural medium - or at least I'd say it is.

Now, The Office is one of the best sitcoms ever made, but it's also been released on DVD already in individual series and box set formats with the Christmas specials included. So how can I, in all conscience, recommend you buy this package, given that it's no different to anything else other than the inclusion of the following bonus material:

The first, third and fourth of these are probably on YouTube already, given that it's been released today. The second is ... I mean, is that even a thing? Is 'broadcast' being used as a verb or a noun in that phrase? What is it wrapping around? You could easily substitute any similar phrase and pass it off as bonus material. 'Evensong gobetweens'. 'Kleptomaniac madrigals'. Anything. It probably means 'interactive menus' (my favourite thing to see in a list of DVD extras - it signifying menus you can use, as opposed to ones you can't).

But look, it's great, obviously. It's got all the episodes plus the specials and it only costs twelve and a half notes.

The Body Farm (DVD)
Buy the DVD on Amazon 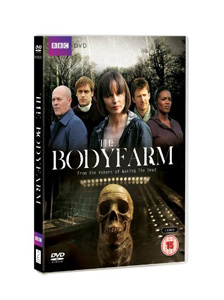 As ever, I need a third DVD to write about to maintain the illusion of a consistent structure, and as ever, it's some BBC drama I've never seen, released on DVD about six seconds after the final episode aired on BBC1 to account for the fact that everyone forgets about BBC dramas very, very quickly.

I did ask my dad about it, though: he confimed that it's a spin-off from Waking the Dead, that it's not all that amazing, and that Keith Allen's in it. If you have any further questions, please address them to him: he is, in many ways, just as qualified as I am to write this.

Peppa Pig: International Day DVD
V - The Complete Second Season DVD & Blu-ray
Heartbeat - The Complete Eighth Series DVD
More:  DVD Weekly  The Office  Ricky Gervais
Follow us on Twitter @The_Shiznit for more fun features, film reviews and occasional commentary on what the best type of crisps are.
We are using Patreon to cover our hosting fees. So please consider chucking a few digital pennies our way by clicking on this link. Thanks!