Eight posters for The Equalizer, each more boring than the last

It's September, the month when Hollywood lets out a 30-day yawn. Denzel Washington's action thriller The Equalizer is probably the largest studio release this month, but you wouldn't know it to look at its posters: a series of eight one-sheets that feature Denzel Washington, your dad's clothes, a gun and no excitement whatsoever. Can it hurry up and be Halloween soon please?


Denzel Washington is in that career sweet spot now where he's paid his dues, got his Oscar, banked some memorable roles and achieved success both critical and commercial. In other words, he can coast from here on in and no one will bust his balls for it. And so we come to The Equalizer, nobody's most anticipated movie of the year; a remake of a property about six Edward Woodward super-fans still have a vested interest in. It promises to be at least as good as Man On Fire or all those other movies that has Denzel on the poster holding a gun looking moody.

What I find strange is how little The Equalizer's marketing campaign strives for your attention. Guardians Of The Galaxy is currently the US #1 and that was released a month ago; there's an open goal at the box-office but The Equalizer is too busy pretending it's deep to appeal to you with flashy posters. Just get a load of these international one-sheets and try not to have an epileptic fit from all the visual stimulation. 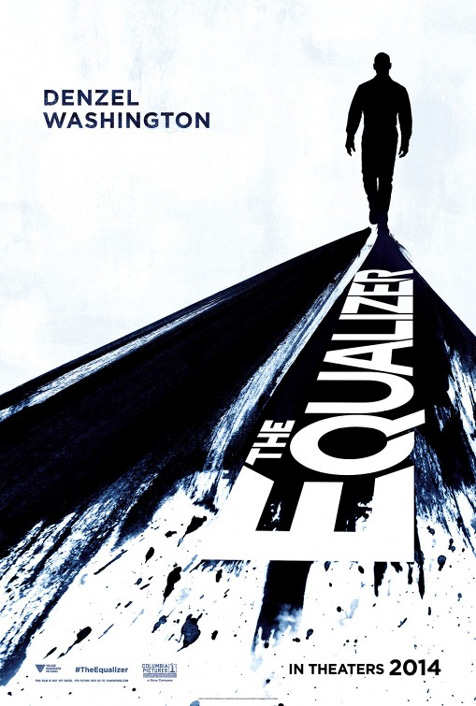 The teaser poster: nothing given away here. This movie will feature Denzel Washington and it seems he's emitting his own skidmarks. But is he walking away from us or walking towards us? That's the kind of cliffhanger that will be answered in theaters in 2014. 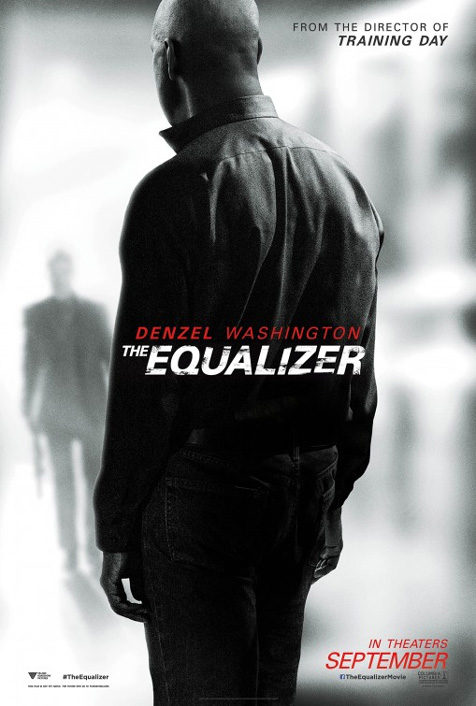 Imagine it was your job to run a website like this and you had to think up a funny caption for this poster. Just imagine how long that would take, before you gave up and wrote this instead. Points of note: Denzel dresses like your dad; unless he has a gun poking out of his open fly, he's unprepared for gunfights; it's not even clear that his enemy is holding a gun - it could easily be a twig or a plastic crocodile he won at the fair. 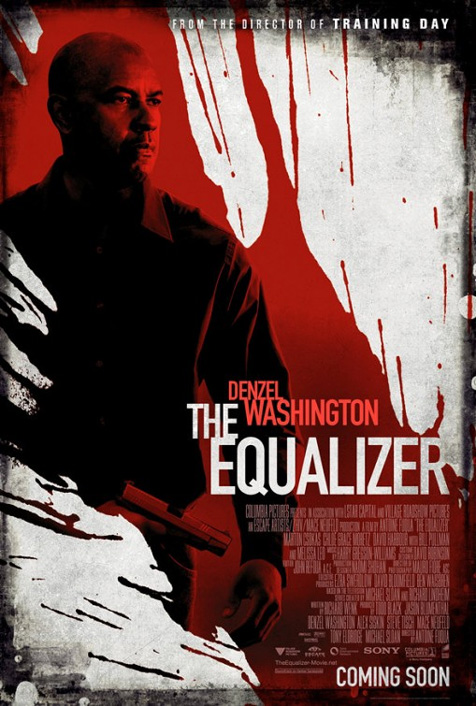 Blood! That's more like it. 'Denzel Washington will bathe in his enemy's blood!' this poster tries and fails to say. What it actually succeeds in saying is "I'm Denzel Washington, The Equalizer, and I'm about to shoot my own hand off. I'll do it, I'm crazy! (*Denzel laugh*)" 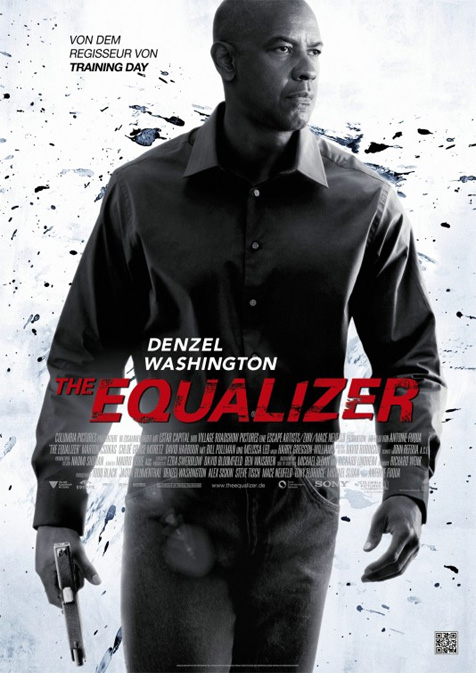 Four posters in and still no movement of any kind. Will Denzel Washington remain stationary for the entire picture? Is he entering his Steven Seagal phase? In any case, the blood has gone and Denzel is now standing in front of some indiscriminate daubings, like an unimpressed dad at his kid's art show. Also the lens flare makes it look like he came in his pants. 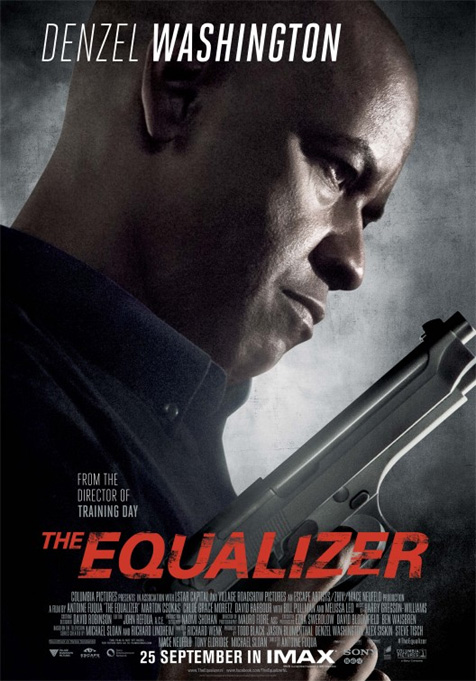 A close-up. Such intensity! Denzel has been holding this gun for three posters now and he is seriously considering using it, even if his face does suggest he's vacantly staring into space while blending a smoothie. At least the dad jeans have gone. I'm assuming he's still wearing them, mind: at no point will The Equalizer attempt to settle the score while pantsless. 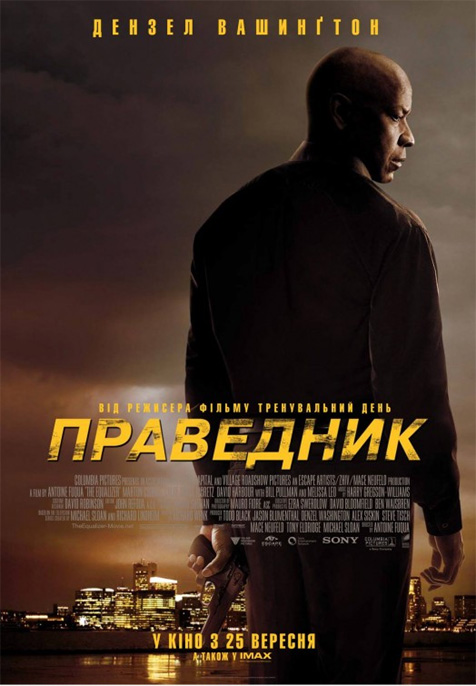 Ah, nope - I thought Denzel looked likely to spring into action, but he's come on all melancholy here and has wandered off to the local dock to do some soul searching. The gun pointed towards the floor suggests his guard has been let down, but the high-waisted belt and tucked shirt still says 'I'm on duty'. Poor AEH3EN BAWNHITOH. Always on the clock. 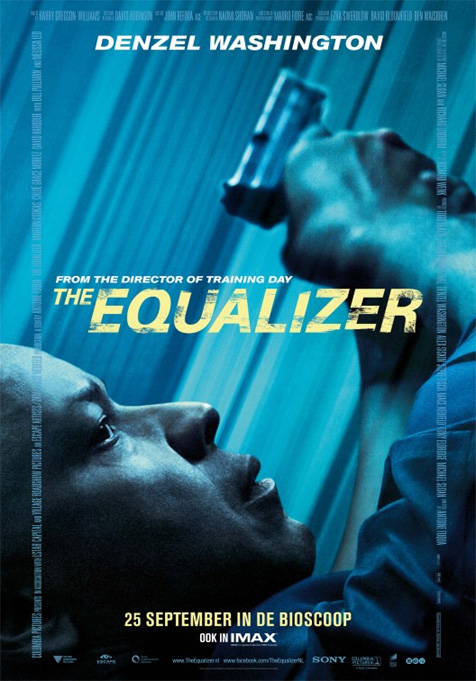 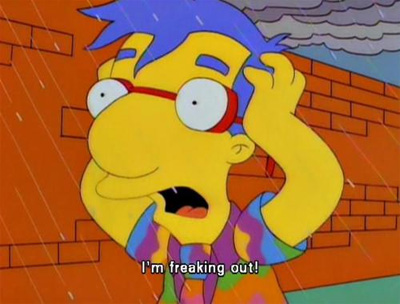 Turns out Denzel thought he saw a pigeon but then he remembered he's not supposed to equalize the pigeons and he should probably get back to his rigorous schedule of moping and lurking. 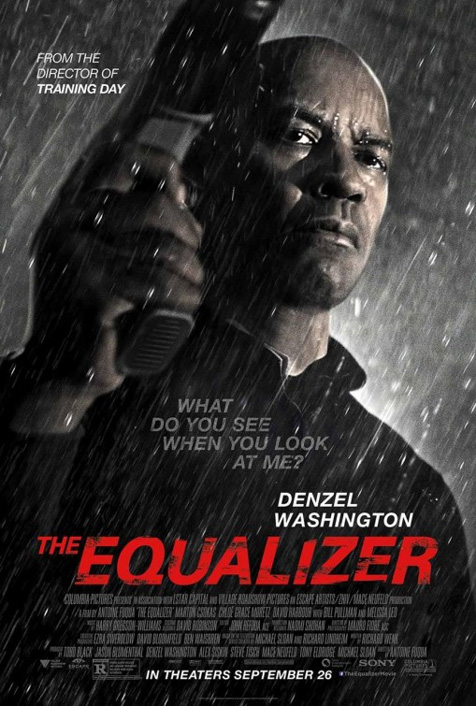 From the director of Training Day? More like from the director of RAINING Day! Hahaha, remember jokes? The colour has gone: we're left with a Max Payne rip-off and a dripping wet Denzel looking even more non-plussed than ever. "I may or may not discharge this firearm today," he's saying. "You'll have to come and see the movie to find out. I can stand here and wait just as long as you."

More:  The Equalizer  Denzel Washington  Antoine Fuqua  Posters
Follow us on Twitter @The_Shiznit for more fun features, film reviews and occasional commentary on what the best type of crisps are.
We are using Patreon to cover our hosting fees. So please consider chucking a few digital pennies our way by clicking on this link. Thanks!