Enraged ticket holders in San Diego this weekend were told they were unable to gain access to the 2014 Comic-Con convention because the entire exhibition hall was taken up by famous actors walking around in disguise.


Following in traditions set by the likes of Andrew Garfield and Breaking Bad actor Bryan Cranston, who last year walked the floor of Comic-Con incognito in an oversized Walter White mask, thousands of actors and celebrities descended on the 2014 convention determined to mingle with "the fans" without blowing their cover. However, analysts determined that as many as 98% of the people at the San Diego Comic-Con were famous, leaving real comic-book fans unable to attend the event.

Harry Potter actor Daniel Radcliffe had the ingenious idea of dressing as Spider-Man in order to attend the increasingly popular exhibition. In full costume, including mask, Radcliffe posed happily for pictures with members of the public, unaware he was actually being photographed with Game Of Thrones actor Alfie Allen dressed in an Iron Man suit and funnyman Jack Black in full Orc regalia. The Princess Leia cosplayer taking the picture was later revealed to be Olivia Munn.

When asked by reporters why he felt the need to disguise himself, Radcliffe said: "I love Comic-Con. It's just so important to stay in touch with the normal people, you know? They keep me grounded. From a distance." The actor then turned and headed towards Hall H, briefly stopping to shake the hand of Ryan Reynolds dressed as Deadpool before accidentally stepping on the foot of Ben Affleck wearing a Chewbacca costume. 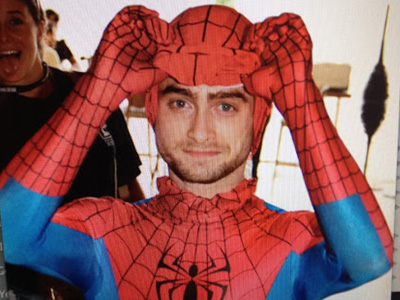 Radcliffe reveals his identity behind a nice safe locked door.


Meanwhile, unbeknownst to each other, Hugh Jackman (wearing a Batman cowl) and Christian Bale (wearing a Wolverine mask) conversed on the Comic-Con floor without either party being aware of the other's fame.

"Great Con this year, right mate?" said Jackman with barely contained glee. "I hear some of the stars like to dress up in costume and walk the floor. We could be standing right next to a movie star!"

"They could be closer than you think," smirked Bale from beneath his visor.

"You don't know how right you are mate," replied Jackman.

"Have a good one buddy," sniggered Jackman, before saying goodbye and walking past the cast of Community dressed as Ninja Turtles.

More:  Comic-Con  Marvel  DC  Spider-Man  Batman  Daniel Radcliffe  DUH Satire
Follow us on Twitter @The_Shiznit for more fun features, film reviews and occasional commentary on what the best type of crisps are.
We are using Patreon to cover our hosting fees. So please consider chucking a few digital pennies our way by clicking on this link. Thanks!