You know, the movie about the girl trapped in a house with a tiger during a hurricane. We talk big cats, hot chicks and Meat Loaf.

So a while back, I discovered a movie I previously had no idea existed called Burning Bright (now called Ravenous). The premise was so smack-you-round-the-head-simple and the hook was so ludicrously awesome, it instantly made me forget about Nicolas Cage's upcoming movies and made me want to see it instead. Once again, here's the synopsis:

"
"
"When 20 year-old Kelly wakes late at night during a hurricane, she finds a hungry tiger stalking her through the halls of her home. With every door and window boarded up from the outside and her stepfather nowhere to be found, Kelly fights to stay one step ahead of the beast while dragging her autistic brother Tom through the house."
Did I mention Meat Loaf is in it? Because he totally is. Anyway, that tiger's claws had dug themselves in and they weren't going to let go. I had to know more. Thankfully, it turns out that posting desperate messages on IMDB's message boards is a viable way of communication, and the movie's director, Carlos Brooks, got in touch with me. Hope you enjoy the interview.

: Tell us a little bit about the plot of Burning Bright...

Carlos Brooks: Burning Bright is about an incredibly HOT CHICK trapped in a house with a TIGER during a HURRICANE. We had another version that explored the latent Freudian implications of her existential dilemma in terms of various indigenous animal myths, but we were running long, and something had to go...

Oh yeah, and she has to face off with her demented stepfather, played by the brilliant Garret Dillahunt [The Road, The Last House On The Left - Ed], and all the while protecting her tripped-out little brother, played by newcomer prodigy Charlie Tahan. 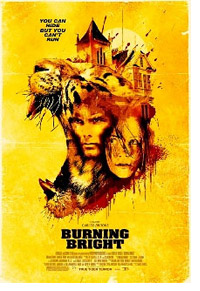 : Are you happy with it being known as 'the tiger in a hurricane' movie? Just a fun film with a killer hook?

: What was your reaction when you first read the screenplay? Because ours was 'this sounds absolutely mental'.

CB: My first reaction, after I got over the crazy-sounding pitch, was to the extremely well crafted screenplay - which takes you by the hand and walks you into rural Florida where you have these low-rent wild animal preserves in people's back yards, and where houses routinely get boarded up to protect from epic hurricanes.

Throw in a homicidal circus tiger bought on the cheap and one demented stepfather, and you have a story unlike that which we've ever seen, all of it rooted in reality. I found myself caught up in the girl's struggle, and in the
movie she becomes much more than just "the hot chick" - she becomes a thinking hero who has to use her wits and her household surroundings to outwit a natural predator who just happens to be stalking her from kitchen to bedroom.

I responded to the pure cinematic potential of all this mayhem. Coming off doing a very cerebral thriller [Quid Pro Quo, with Nick Stahl and Vera Farmiga - Ed], I saw this as a chance to do the opposite with almost no dialogue for two-thirds of the movie. And once you understand the whole set up, it stops being crazy-crazy, and starts being just crazy suspenseful.
More:  Ravenous  Interviews  Burning Bright
Follow us on Twitter @The_Shiznit for more fun features, film reviews and occasional commentary on what the best type of crisps are.
We are using Patreon to cover our hosting fees. So please consider chucking a few digital pennies our way by clicking on this link. Thanks!
Next Page »