Ok, so this is pretty spooky, guys. Passengers - a sci-fi film written by Prometheus scribe Jon Spaihts that has long been stuck in development - has seen two massive changes in status this week, almost at the same time!

First hugely attractive and bankable movie stars Chris Pratt and Jennifer Lawrence sign up for the movie, and then it gets the go ahead for filming! This kind of coincidence is almost worthy of a film itself. 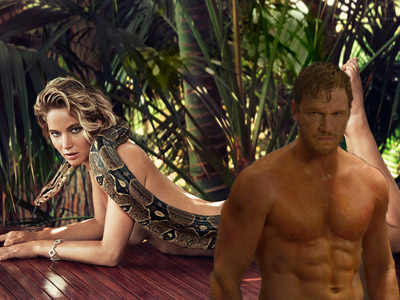 "How the hell did we manage to land this gig?"


A spokesperson for Sony, who are foolishly bankrolling this completely original film with surely no hope to make any kind of return, said:

"
"
We are pleased to finally move ahead with a film starring the lead of massively successful Guardians Of The Galaxy and the box-office-record-breaking Jurassic World, as well as Katniss whatshername from the Hunger Games.

This kind of risky venture is typical of Sony's approach to promoting innovation and originality in filmmaking and storytelling. It's... wait, what is it about? What's a 'space romance'?
When informed that the film is titled Passengers and is about a guy who awakens from stasis in deep space 90 years before everyone else and decides to wake up a woman to keep him in company on a journey through a deep, dark void of nothingness until the end of their living days, the spokesperson said:

"
"
Huh. Who's going to watch that? But wait, how much did Gravity make? Right, and we still have Chris Pratt and Jennifer Lawrence on board, right? Then yes, let's throw money at this terribly, terribly risky film.
Then he got in his solid gold limousine and very, very slowly pulled away to meet an appointment to have his pupils surgically lasered into the shape of dollar signs.

More:  Passengers  Chris Pratt  Jennifer Lawrence  Jon Spaihts
Follow us on Twitter @The_Shiznit for more fun features, film reviews and occasional commentary on what the best type of crisps are.
We are using Patreon to cover our hosting fees. So please consider chucking a few digital pennies our way by clicking on this link. Thanks!