There are far too many films on this week. The list is ridiculous. Once I'd typed them all out, I couldn't be bothered to write about more than one.

Hands up who knew the following about Big: that it was co-written by Steven Spielberg's sister? That Harrison Ford and Robert De Niro were both offered the lead role? That there's a version on a region 1 DVD with an extra 26 minutes that remains the only extended edition I've ever seen to genuinely add something worthwhile to a film? Probably not for the last one, I suppose. You would've had to ask me in order to know that, and people don't speak to me all that much.

I know all this crap because I think Big is quite, quite wonderful, possibly the best film/thing of the eighties/sphere of human endeavour, and probably Tom Hanks's greatest performance. If you've ever been subjected to my usual genuflection when it comes to Tom Hanks, and observed that it amounts to the written equivalent of attempting to kiss another, non-consenting, person through a closed window, failing, and leaving a saliva-flecked mouthprint on the glass, try and ignore the other times I've said something was his greatest performance, and have a go at taking me seriously.

For it is: it really is. Just look at the lovely bastard. Yes, yes, the piano dance and everything, but watch the little nuances. When he first sits down at his office chair next to Jon Lovitz, watch how he sits on one of his feet like a child would. The exuberant swinging of his shopping bag when he walks. His little bashful smirks whenever a grown-up talks about sex or kissing. He totally embodies a teenager. It's a delight. 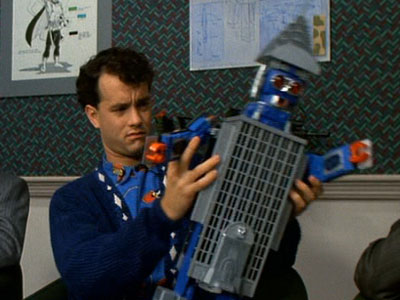 Michael Bay would later reshoot this scene frame by frame for Transformers: Dark of the Moon, at a cost of three hundred million dollars.

Despite the number of star vehicles he's had, there aren't many other films that hinge so totally on Hanks' performance (well, there's Cast Away, obviously, which otherwise would've just been a volleyball on a beach for two hours). Big is nothing without him. If its central message - that adults can become too serious, and would benefit from a little more carefree embracing of their inner child every once in a while - is to work, it has to be clear that Josh is capable of infecting adults with his childlike approach. The other actors have to play off Hanks or drown, but he gives them so much to work with: his cajoling of Elizabeth Perkins to look out of the car sunroof; his exaggerated 'death' by ray-gun in the toy store at Robert Loggia's feet; the way he turns an 'adult' racketball game with John Heard into a competitive farce and shows up just how childish it was to begin with. All of these are open goals for his co-stars.

This sort of wish-fulfilment fantasy plot was fairly common in the eighties: a character unsatisfied at their lot in life would wish for a change and found it came true through some sort of magic, only to later discover that it brought misery and that it's OK just to be yourself. Teen Wolf, for example, is essentially the same story as Big, quite apart from the series of films like 18 Again!, Like Father Like Son and Vice Versa that were all based on a similar bodyswap/age-changing premise. But though Big came after all of these, it came with a bigger heart, a central performance more compelling, and almost no reliance on the saccharine to achieve its aim. It brought Tom Hanks his first Oscar nomination and took him a big step closer to his move out of comedy and into the serious dramatic heft that would define his work throughout the nineties.

Then next year he made Turner & Hooch.