Here are your films for this week, the first selection of 2012! Wow, it's like we're in the future and, therefore, all these films represent the very best, cutting-edge, state-of-the-art examples of modern movie-making. Nah, not really - it's all old shit.

Obviously everyone's already seen Robin Hood: Prince Of Thieves. Everyone's laughed at Kevin Costner failing to even attempt an English accent; everyone's balked at the day-long walk from Dover to Nottingham via Hadrian's Wall; and everyone's sung the 16-week number one from Bryan Adams at the top of their lungs over the closing credits.

But it's easy to forget that, while this version of the classic legend led to endless parodies, it's actually rather a great movie. If anything, it is merely a product of its time and will be remembered as being a quintessential 90s movie in the same way that The Breakfast Club and Mannequin best represent Hollywood's 80s output.

Costner may have won awards for his other more serious roles, but it's difficult not to associate him most with this role as the arrow-slinging rich-robber, which cemented his image as clean-cut heartthrob and pin-up for your mum. Also, swashbuckling Errol Flynns and cartoon foxes aside, Costner is the best embodiment of this green-tuniced merry man. Far better than Russel Crowe shouting while riding a horse anyway.

So, look past the sappy Marian romance and the brotherly love with Christian Slater and you'll remember a blockbuster that still stands up today as being exciting, funny and thoroughly entertaining. For example, you can't tell me your jaw didn't drop the first time you saw that famous close-up tracking shot of Robin's arrow through the woods (the bullet-time of its day). You can't tell me that you haven't been enthralled by Alan Rickman's sardonic Sheriff, whose astounding charisma is such that this might be the only film to make you actually root for the baddie to win. You can't tell me this film isn't worth trying for. You can't tell me it's not worth dying for. You know it's true. Everything I do...(ahem)
The Holiday (2006) Friday, ITV2, 9pm

I know what you're thinking: why highlight this girly rom-com as a pick of the week? Especially as it's a Christmas movie, isn't it? What's it doing on this week? Well, screw you - I've always had a soft spot for cheesy flicks and I just so happen to have seen this very recently so it's easy to write about. Unlike, for example...(*scans list below*)...The Accused, which would be a lot harder to write about without making inappropriate jokes.

So The Holiday then; a film in which Kate Winslet and Cameron Diaz swap houses because they're both sick of their well-off, comfortable lives. Kate gets to live in Cameron's massive LA pad and hang out with an Oscar-winning OAP, and Cameron gets to...er...live in a small cottage in a village somewhere. While this might seem unfair, at least Cameron gets it on with Jude Law who, I'm told, is reasonably attractive to the average female. Kate, on the other hand, has to settle for a remarkably constrained Jack Black.

It's most certainly heart-warming comedy at its most basic, but the festive setting and likable performances make The Holiday surprisingly watchable. But, more importantly, there is one scene that makes this film worthy of this week's pick. Ladies and gentlemen, I give you: Jude Law's hilarious Mr Napkin Head. 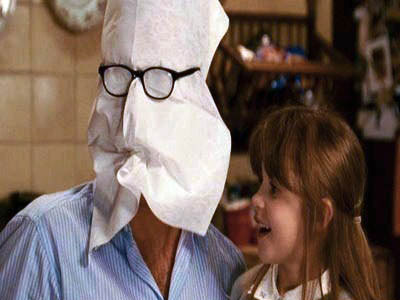 This is fucking comedy genius: