We've all seen the first picture from The Wolverine, showing a shirtless Hugh Jackman - or should that be Huge Jacked Man? - flexing the shit out of his muscles. But did you notice these five details? I bet you didn't, because I just made them up. 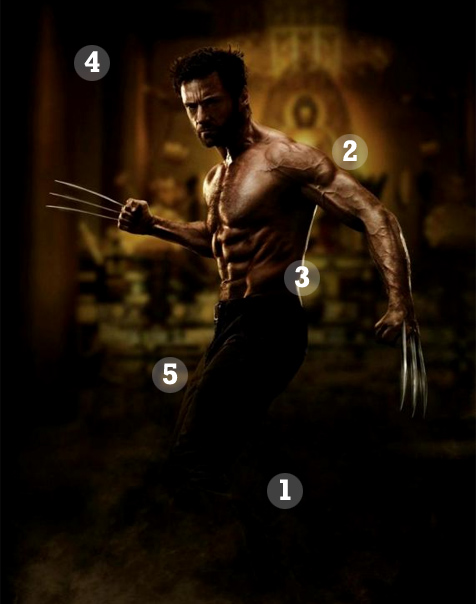 In this new prequel - "a standalone film" says Hugh Jackman - Wolverine's legs appear to have vapourised. "It'll be difficult for him to get around with two gaseous limbs," Jackman laughs, "but that challenge is what attracted me to the project."

Look closely, and you'll see Jackman's veins are actually CGI, and modelled on the river network of the Cumbrian coast. "I went there on my holidays in '08 and had the time of me bloody life," a dewy-eyed Jackman reveals. "Narrow boat," he added.

Jackman's left ribcage appear to show a ghostly image of a man's face covered in bandages: a tribute to Jackman's twin brother, who he ate in utero. "Just my way of saying g'day to the little guy," Jackman admits. "Poor little fella never stood a chance."

Notice there's no sign of any yoghurt, leading fans to believe the film features no yoghurt at all. Jackman has made his distrust of the dairy-based dessert public ("Nope, not for me") and Muller have confirmed they have not been approached regarding sponsorship.

Wolverine sports a pair of brown corduroys, hinting that the movie's wardrobe will be supplied by TK Maxx as previously suggested. "Wolvie wears a pair of nylon cords in early scenes and I've gotta say, the trews are a dream," Jackman raved.

More:  The Wolverine  Wolverine  X-Men  Hugh Jackman  James Mangold
Follow us on Twitter @The_Shiznit for more fun features, film reviews and occasional commentary on what the best type of crisps are.
We are using Patreon to cover our hosting fees. So please consider chucking a few digital pennies our way by clicking on this link. Thanks!