Forget the Oscars, we need to rethink the Razzies

Though we all bitch and moan and blog about how unnecessary and awful and predictable the Oscars are, the very fact we do all these things proves there's still an interest in the Academy Awards, and their arbitrary method of rewarding the 'best' films of the year. But on the flip side? We have the increasingly tedious Golden Raspberries, or the 'Razzies', which 'award' the 'worst' movies of the year. If we're going to bitch and moan about movies, is this really the best we can do?


Last night, as is customary, the Razzies beat the Oscars to the punch by dishing out Golden Raspberry awards to the least deserving movies of the year. The Razzies are something of an annual tradition in Hollywood (this year's ceremony was the 33rd) and, in time-honoured fashion, they were held in close proximity to the Academy Awards; on this occasion, in the Continental Breakfast Room of the Holiday Inn on the Walk of Fame. It's hardly the Dolby Theatre, but it contributes much to the charm.

Unfortunately, that charm is seemingly in short supply these days. The Razzies' last real hurrah saw Sandra Bullock turn up in person to accept her Worst Actress award for All About Steve in 2010, the night before she won Best Actress at the Oscars. That's as newsworthy as the Razzies gets. Despite these rare occurrences when an actor or actress has the humility to accept their award in person, the Razzies now comes across as a cheap, catty, humourless exercise in bullying and bandwagon-jumping.

I'm no fan of the Twilight saga, but was it really the worst film of the year? Or, more likely, was it just the most high-profile target for ridicule, and the most likely to generate headlines for the Razzies? In which case, why do we continue to indulge them by writing about them? 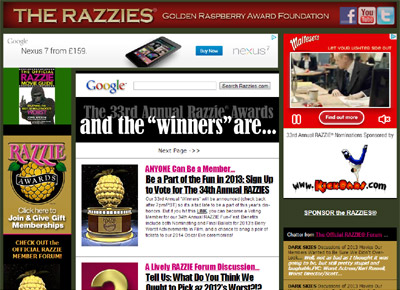 
Perhaps my increasing dislike of the Razzies is indicative of my dislike of cattiness towards film in general. When I started this blog in 2004, sarcasm and snarkiness was 'in'. Or maybe it was just easier to poke fun at a film than it was to deconstruct it. Fast-forward to today, and I shiver whenever someone uses the word 'snarky' to describe this website. The word has taken on negative meaning, conjuring an image of an eternally-displeased blogger, incapable of feeling true emotion, interested only in making fun of things more successful and popular than he. That is not my intention and never has been. I take far more pride in writing a review for a film like Tyrannosaur than I do for a film like Just Go With It.

The snark is not limited to blogs: it's widespread. Just look at the glee with which the media reported that Danny Dyer's new movie, Run For Your Wife, made a relatively small sum of money at the UK box-office. The knives were out, and sharpened, before the figures were even in (in the interests of transparency, this website was also party to that rubbernecking). Is a forgettable, micro-budgeted British farce with a dusty script and a cast with an average age of 87 really so worthy of the industry's spite? Or, like the Razzies, is it just that some can't resist scoring in front of an open goal? 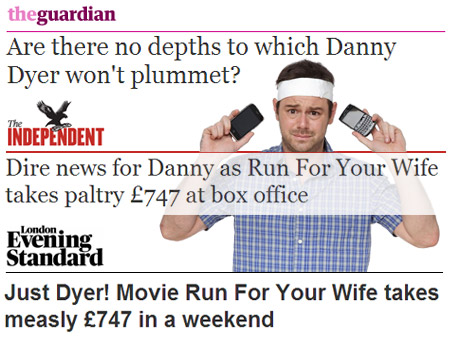 Get it, you guys? Dyer? Dire? It's called wordplay, look it up.


We can all do better. As a movie fan first and foremost, I understand the pleasure of tearing into bad movies, hence I understand the existence of the Razzies, but it's important to pick your targets sensibly. Twilight-bashing is not only horrendously unoriginal, but almost entirely unmerited; it has a huge following who adore it, and by all accounts, the final chapter (winner of seven Razzies) is one of the best in the series. It's not Ishtar.

In a year when The Amazing Spider-Man was released - a charmless mimic of Sam Raimi's original - how could anyone call Breaking Dawn the worst sequel/remake? 2012 was the year of John Carter: a folly if ever there was one, and a failure on almost every level. It was a titanic flop, and in my opinion, rightly so, but it wasn't nominated in any categories. You'd think a movie with as much camp factor and cult potential as John Carter would be Razzie catnip, but not when there are young female stars like Kristen Stewart and Rihanna to belittle. Honestly, you'd think the Razzies were run by a cabal of attention-seeking, jealous old queens.

Let's stop the snark. Cancel the cattiness. Run the Razzies out of town. If we must be unkind towards bad movies, let's at least be constructive and not revel in schadenfreude. Because really? The Razzies utterly fail in their effort to ridicule bad movies and serve only to project that bitterness back on themselves, giving all of us a bad name in the process.

More:  Razzies  Twilight  Serious Corner
Follow us on Twitter @The_Shiznit for more fun features, film reviews and occasional commentary on what the best type of crisps are.
We are using Patreon to cover our hosting fees. So please consider chucking a few digital pennies our way by clicking on this link. Thanks!