Found under the couch #1: Fist of Fun

We've been moving the furniture around, here at the

lair. You're never going to believe what we found under the couch; an undetermined amount of videos of shows that we liked from the past! I know, right, how cool? Up this week, Lee and Herring's big TV break: Fist of Fun.

Remember how it used to be in the 90s? When people wore waistcoats, and used vowels, and entertainment on TV was hosted and created by people who weren't just famous for having already been on TV. And when Stewart Lee looked like this: 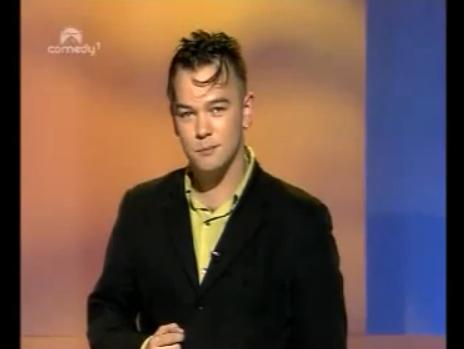 Before we launch into a loving retrospective of Fist of Fun, I need to tell my Stewart Lee Story. Don't worry, it's not very long.

I've been a bit of a comedy groupie since forever, and I've had a crush on Stewart Lee - for obvious reasons - since about 1995. In 2004, I met him in Shepherds Bush after I'd just almost wet myself laughing at his "You wouldn't like me when I'm Ang Lee" bit. I stood at the cloakroom bit in Ginglick in SheBu, and I gushed some nonsense about how great he was, and how brilliant Edinburgh would be (AS THOUGH HE'D NEVER BEEN BEFORE). I was so awestruck, I was an utter bollocks-mouth. He, however, was charming and listened to my garbled cud then smiled, said thanks and went on with his life.

I revisit that night at least once a week and mentally kick myself for not just saying, "Great set, Mr Lee. An honour and pleasure to meet you."
Ah well. Such is life.

If you're not a big fan of Stewart Lee or the equally talented Richard Herring, then you're possibly medically dead. Or perhaps you've never heard of Fist of Fun because you spent your youth with friends and family or 'outside'.

I will also let you off if you are too young to have seen Fist of Fun, that's not your fault per se. I'm not saying you're entirely innocent, but you can't be held fully accountable. It's okay, we'll make up for it now.

In the late 80s/early 90s The Mary Whitehouse Experience made wearing glasses and being sardonic the new rock and roll, Newman and Baddiel going on to sell out Wembley Arena and Punt and Dennis doing Radio 4's The Now Show for what seems like an eternity.

Quietly beavering away in the background of this breakthrough were two young Oxford grad comedians - Richard Herring and Stewart Lee - who spent their time writing excellent radio comedy; they wrote for Chris Morris' On the Hour and collaborated with Armando Iannucci and Rebecca Front on Lionel Nimrod's Inexplicable World. They were the first people to use Tom Baker as a comedy narrator. Except, of course, for Tom Baker.

In 1993 Lee and Herring were relocated to Radio 1 (Radio 1 used to be good, and edgy, and damn funny) and given a much freer reign to talk about gnat's chuffs and do sketches about pathetic Welshmen who eat month old cottage cheese. This was so successful that they were given a proper TV show (probably because Stewart's pretty face was wasted on radio).

And thus, Fist of Fun was born.

There is something darkly comic about a small grinning girl repeating "Fist!" over and over again.
More:  Archive  Fist Of Fun  Stewart Lee  Richard Herring
Follow us on Twitter @The_Shiznit for more fun features, film reviews and occasional commentary on what the best type of crisps are.
We are using Patreon to cover our hosting fees. So please consider chucking a few digital pennies our way by clicking on this link. Thanks!
Next Page »