The trailer for Tracers, Taylor Lautner's long-gestating movie about cycle messaging and parkour, hit the web today, the same day as the eagerly anticipated drama Knight Of Cups from director Terrence Malick. Guess which one I'm poring over in detail after the jump.


I hope you don't think this is one of those 'so bad it's good' type deals where I pretend to be excited over a terrible-looking movie because being snarky is easy, because I am genuinely, 100% excited about watching Taylor Lautner's new parkour-based movie, Tracers, in an unironic way. Just watch the trailer. How could I not be excited?

I am in love with this trailer, from the credit 'Mongkol Major: A Sahamongkolfilm Company' onwards. It feels like a movie that's already preserved in time like a mosquito in amber. Given that it's a movie about parkour, it was dated before the last full stop was written. I like to imagine the writer [IMDB revision - there were FOUR writers] leaning back in their chair[s] and thinking, 'There it is. A movie about parkour that will be enjoyed by generations.' Little did they know that parkour lost its mystique pretty much the moment Andy Bernard jumped straight into the cardboard box in the Dunder-Mifflin parking lot.


Now we're left with a film that was beaten to the one-two punch of 'guy with cool name doing bike tricks and being way rad' by Premium Rush, of all films. Tracers already feels like one of those fad movies that gets released just as whatever fad it was capitalising on starts fading away, like those rollerblading movies or The Wizard or one of the fifteen movies about skateboarding that Christian Slater made in 1991. If you put a soundtrack of fart noises over it, you could probably legit sell it as a parody of the kind of film Taylor Lautner might be expected to make in 2014.

Reminder: Lautner's character is a cycle messenger and his name is 'Cam'. Well, it was either that or 'Shaft'.

I for one am looking forward to seeing how Cam justifies being part of a group of free-running, bank-robbing murderers, one of whom he has steamy stairwell sex with. "You see your honour, I... gee whiz, it sure is hot in this courtroom..." (*removes shirt*) "THIS COURT FINDS THE DEFENDANT NOT GUILTY AND SUPER HAWT!" (*bangs squeaky gavel*)

I mean, how can you not love this poster? Lautner dressed as a cult member having his foot sheared off by a taxi, a lens flare emanating from his armpit. I'm no parkour expert - I respect my ankles far too much - but I'm pretty sure those guys who just jumped off that building are fucking pancakes. There's 'exciting and daring urban free-running' and then there's just 'jumping off the roofs of multi-storey buildings like Samuel L Jackson and The Rock in The Other Guys'. Their deaths are on your hands, Cam. 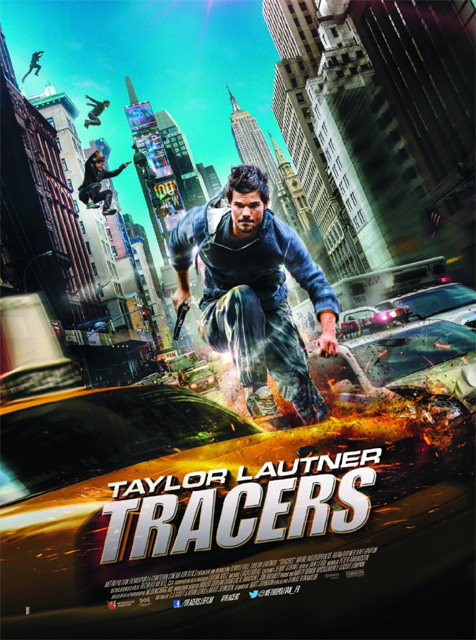 This is the pile-up that causes the traffic jam in Robert Pattinson's Cosmopolis.


Tracers is released on Christmas Day in Thailand, which is just about the greatest present I can imagine. Someone buy me a plane ticket, or failing that, a region-free DVD (I'd prefer the plane ticket).

More:  Tracers  Taylor Lautner  Parkour
Follow us on Twitter @The_Shiznit for more fun features, film reviews and occasional commentary on what the best type of crisps are.
We are using Patreon to cover our hosting fees. So please consider chucking a few digital pennies our way by clicking on this link. Thanks!