Gather round folks for a good old-fashioned poster cornholin'

How bad is this new poster for Seth MacFarlane's A Million Ways To Die In The West? Let me count the ways.


I hate Seth MacFarlane there I said it. I hate his face. I hate his comedy. I hate that he loves the sound of his own voice. I hate that the sound of his own voice is exactly the same throughout all of the projects he creates (I also hate how all of the projects he creates are exactly the same). I will probably also hate his new Western comedy, A Million Ways To Die In The West, but as I haven't seen it yet, I'll have to reserve judgement and just settle for hating the movie's terrible new poster instead. 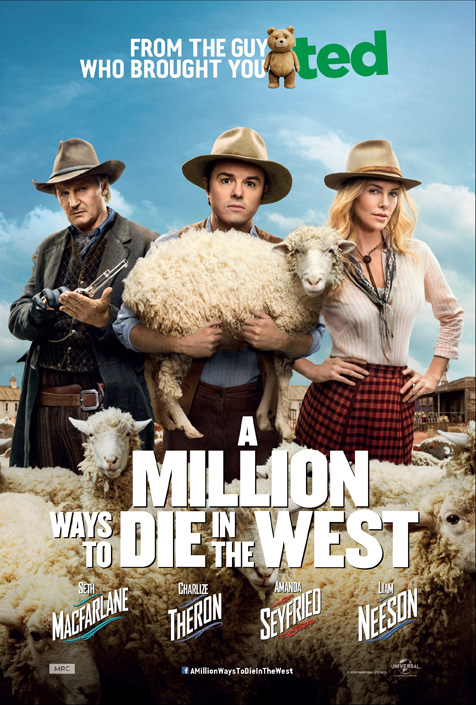 
Let's work from the top down. First of all, I can appreciate that Ted was a monster success and you'd want to shout about it. But do we really need to be reminded of what Ted looks like on the poster? And was the Ted title treatment really so memorable and important we have to endure its sickly green on an otherwise colour-balanced poster?

He's holding a sheep? That is stone-cold fucking hilarious, bro. I wouldn't have thought anyone could come up with a visual gag that breathtaking until I saw it was from the guy who brought us Ted. I don't believe he's even holding that sheep. It's not even a real sheep.

Are sheep massively important in this film? I'm going to hazard a guess and say 'no'. Then why are they taking up around 50% of the real estate on this poster? It's distracting. Apart from the hats, and the word 'West' in the title, you would otherwise have no idea this movie was even supposed to be a Western. There's that small crap-shack vista crammed underneath Charlize Theron's hand, but that's it.

If you'd care to look closelier, you'll see they have Photoshopped a bulge in Liam Neeson's character's trousers. Because he's supposedly well-hung. The sheep's expression pretty much matches mine exactly. 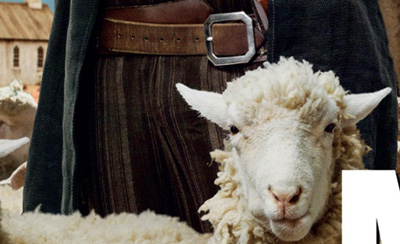 Finally, the title treatment. That is an absolute car crash of a title treatment, although in fairness to car crashes, they can sometimes look cool. Why the plain, Impact-esque font when you have such lovely typography for the cast? Why the white on an off-white background? Do you read from left to right or top to bottom? Is the text centre aligned, left aligned or right aligned? You can't have all three. You just can't. That's like having your cake, eating your cake and regurgitating your cake to sell it on eBay. It's like the first thing you learn at Font School. You would be shot in the Old West for such reckless displays of font alignment.

Come to think of it, why isn't it called 'One Million Ways To Die In The West'? Who starts the title of their film with the word 'A' anyway? Apart from A Prophet, but that's a translation. Seth MacFarlane, you are not Jacques Audiard and you never will be. Stop trying to be Jacques Audiard.

In conclusion then, Seth MacFarlane is shit, this poster is shit and sheep are shit. Let's all go to the pub.

More:  A Million Ways To Die In The West  Seth MacFarlane  Liam Neeson  Charlize Theron
Follow us on Twitter @The_Shiznit for more fun features, film reviews and occasional commentary on what the best type of crisps are.
We are using Patreon to cover our hosting fees. So please consider chucking a few digital pennies our way by clicking on this link. Thanks!