Hal Jordan aka masked superhero Green Lantern has expressed his excitement over Warner Bros' new Justice League movie, telling us "I can't wait to hook up with my super friends and start making movies again!" Batman and Superman are yet to comment.


Green Lantern, talking to us from his secret hideout, couldn't contain his glee that Warner Bros decided to restart production on the Justice League superhero ensemble movie. "Gee whiz, I'm excited," a visually animated Lantern enthuses. "I'd always hoped to appear on screen with icons like Batman, Superman and Wonder Woman, and now I'll get the chance! I kind of screwed up with my own movie but I'm pretty sure the Justice League guys will have my back this time!"

The Justice League movie was first proposed by Warner Bros in 2008, with director George Miller in the hot-seat and soon-to-be star Armie Hammer lined up to play Batman. The movie was cancelled due to budgetary concerns, but in light of The Avengers' billion-dollar take at the box-office, Warner have commissioned writer Will Beall to draft a new screenplay.

"I've already called Will, like, 15 times to tell him I'm available for Justice League duties," says Green Lantern, punching Beall's numbers into his phone once more. "After the first few times I phoned, I kept getting his voicemail. He must be getting bombarded with calls from all of us! Drat. Engaged. I'll try again later." 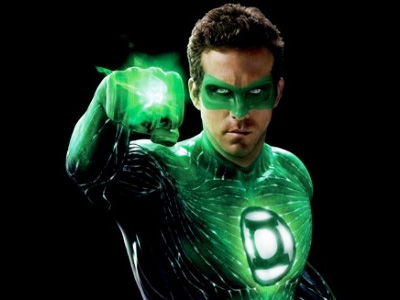 Several times during the interview, Lantern requested we shouldn't "leave him hanging".


Lantern already has some ideas on the direction the Justice League movie might take, almost all of which involve Green Lantern as the main protagonist. "I know Will wants to go his own way, but I think Green Lantern still has so much left to achieve," raves the masked hero. "Like at the end of my movie, when Sinestro turns evil... well, the Justice League could fight Sinestro. Except, I guess, the ones who can't survive in space. So Batman and Flash might have to sit it out. But otherwise it'd be cool."

"There's still the unanswered questions regarding my difficult relationship with Carol Ferris," Lantern continues. "Superman and Aquaman could give me dating tips. Well, maybe not Aquaman."

Officially, no existing DC characters have been confirmed for the new Justice League movie as the script is still in development. Green Lantern, however, has already pleaded with his 543 Twitter followers to start an online campaign for his inclusion, using the hashtag #lanternjustice. As yet, Green Lantern's Facebook status proclaiming his desire to be selected for Justice League only has four 'likes', one of which is his.

When asked for comment, Batman's agent said the caped crusader was currently committed to promoting The Dark Knight Rises, while Superman's PR agency would only say Kal-El was busy shooting next year's Man Of Steel with Zack Snyder. Wonder Woman's spokesperson said Diana Prince was "potentially interested if the script was right" but she is thought to have one eye on her own feature film, which would call the legitimacy of Warner Bros' new Justice League movie into question.

Green Lantern becomes visibly agitated at the suggestion. "Everyone knows I work better in a team," he trembles, ring rattling nervously on his coffee table. "Ensemble superhero movies are hot right now and Green Lantern has unfinished business. Come on guys, I have a magic ring! That's... I mean, who else has that? I need another chance. They can't take this away from me. Justice League is all I have. You couldn't put in a good word for me, could you? Please?"

After his self-titled movie flopped in 2011, Green Lantern was last seen being forcibly removed from the set of The Avengers.

More:  Green Lantern  Superheroes  Ryan Reynolds  DUH SATIRE
Follow us on Twitter @The_Shiznit for more fun features, film reviews and occasional commentary on what the best type of crisps are.
We are using Patreon to cover our hosting fees. So please consider chucking a few digital pennies our way by clicking on this link. Thanks!