Place your bets now on who the killer's going to be: it's bound to be one of this lot, so get your prediction in early, because bragging rights are at stake. Warning: spoilers and a total lack of fun lay ahead.


As if it wasn't already obvious from the general ramshackle nature by which this site is run, these predictions are based on absolutely nothing. Any plot details which are leaked are done so purely by accident. Any bragging rights earned by correctly guessing the killer will be null and void in reality and may lead to you being shunned or wedgied or stabbed for realsies.
Sidney Prescott 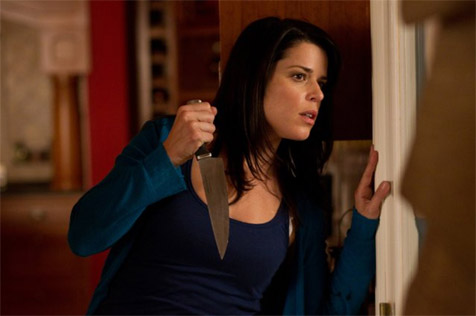 Who she? You know, Sidney Prescott. Daughter of Maureen Prescott, former girlfriend of first killer Billy Loomis, escapee of several near-fatal slashings and the best reason there is for going unlisted.

Why her? Because if you had to write a script for a third sequel to a horror franchise that's been accused of wearing out its welcome, the first place you'd go when thinking of a really shocking, surprise ending would be to have the heroine be the killer. Sidney returns to Woodsboro to promote a self-help book, which sounds like a suspiciously shit reason to go back. Unfinished business to finish off, perhaps? She'll be in league with someone, just you wait and see.

Also, look at her! Knifey McGee over here! Face it folks, she's either the killer, or she'll die - which is more likely?
Gale Weathers 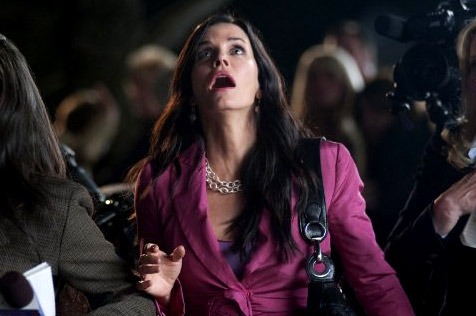 Who she? Feisty news hound and survivor of the first three Scream movies, who has never let a friendship or relationship get in the way of a good story. Married to Deputy Dewey Riley, an obviously ludicrous pairing.

Why her? If Sidney isn't the killer, then you can put your money on one of the old guard being Scream 4's Ghostface. Gale's motivations have always been questionable: perhaps she's fallen on hard times and would do anything for a scoop - maybe even plunge the knife herself?

Pause the trailer and there's a split-second shot of her taking the mask off - it's likely to be a red herring, but could it be a red herring red herring? Hmm, smells fishy to me. Though it looks like she's about to be gutted in the trailer, don't write her off yet. Cox likes her parts meaty after all. Fnar.
Dewey Riley 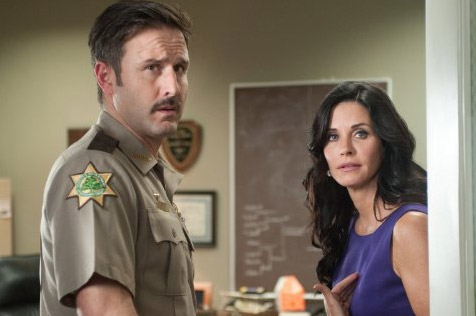 Why him? Another one on the suspect list from the start, Dewey ticks the boxes marked 'seemingly nice guy' and 'possible psychopath'. He's seen some crazy shit in his years as (*snigger*) Deputy Sheriff - maybe popping a cap in Sidney's brother at the end of Scream 3 sent him a little doolally?

That'd explain his marriage to Gale: what price a Bonnie & Clyde-style bloodbath from the both of them? Sorry, I keep forgetting I'm talking to a fictional bookie.
These two dorks 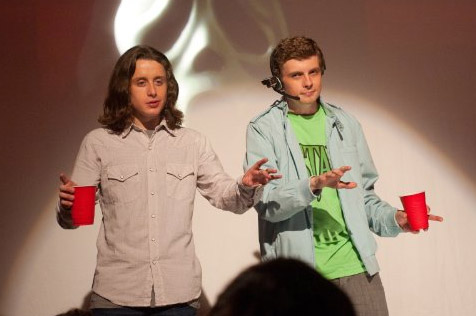 Who they? These nerds are Charlie and Robbie, the Randy substitutes from Woodsboro high who will no doubt explain the new rules of horror movies to all the pretty young things about to be slaughtered.

Why them? They sure do know an awful lot about horror movies... seems like they'd be prime suspects to pull of a murder most cinematic. They look harmless enough (no Culkin kid ever did wrong) and they should stick around to provide some much needed exposition (you know, just in case you miss all the film references) but consider them dark horses: sometimes geeks are capable of terrible things when angered...
Kirby Reed 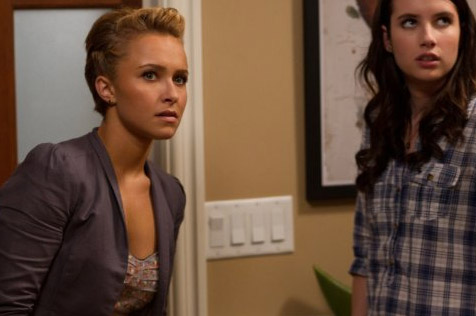 Who her? Best friend of Jill (below). Feisty (see short hair) and film savvy (knows her remakes). Not a virgin (apparently).

Why her? You could say she has previous. 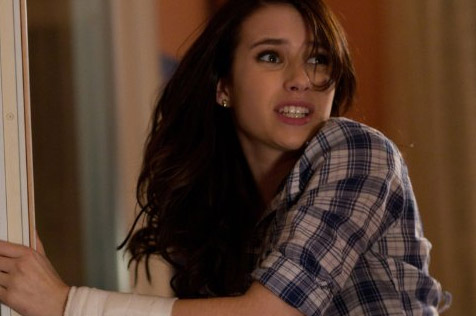 Who her? Jill is Sidney's cousin but she might as well be cast as 'The new, younger, hotter Sidney'. She will be the principle dame in mild peril, judging from the amount of panicked running she does in the trailer.

Why her? Because 'Jill' rhymes with 'kill'. She's an outside shot, at least. The Prescott family have been through some fucked up shit over the past decade: who's to say that stab-happiness hasn't rubbed one or two relatives up the wrong way? Chances are slim, though: expect her to survive... until Scream 5. Which will probably be called 5cream.
This guy 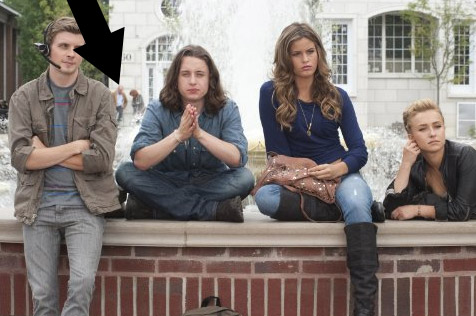 Who he? That guy lurking in the background there.

Why him? Because look at him.
Whoever Alison Brie is playing 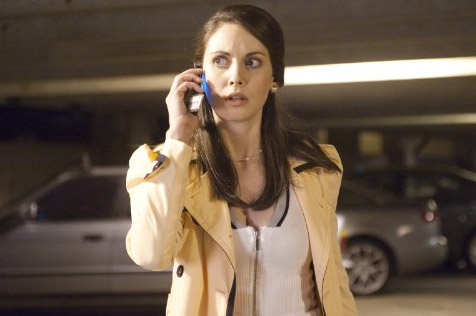 Who her? IMDB has her as Rebecca, Sidney's personal assistant, but she'll always be Annie the paranoid pill-popper to me.

Why her? Because it's the perfect excuse to have a picture of Alison Brie on the website. She's probably not the killer: dollars to donuts she goes arse-first off that car park she's mooching in.
Detective Hoss and Deputy Perkins 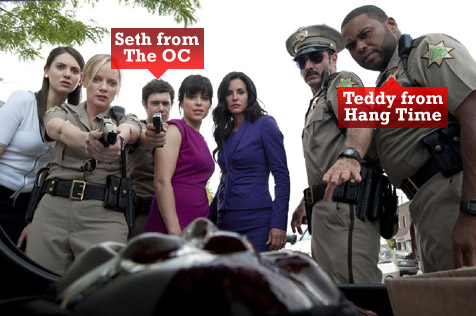 Who they? I think the above diagram is illustration enough. Hoss and Perkins are the comic-relief cops who'll no doubt bring levity to the situation while utterly failing to prevent a dozen murders. I smell a raise!

Why them? Cops get all the best access to crime scenes. Smudge a print here, toss some evidence there... killing would be a doddle for these chumps. Remember when Adam Brody had the world at his feet? Yeah, me neither. But he sure came close to nailing that Summer chick on The OC. That was a great show. They should make a movie of that.
These two hot, sexy, famous chicks 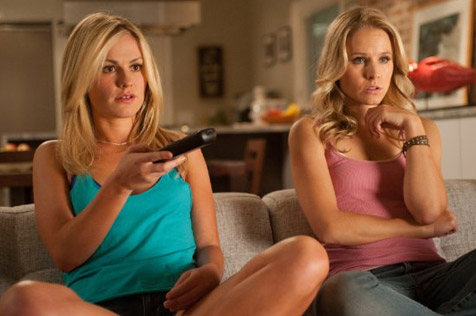 Who they? Billed as Rachel and Chloe. Their lack of surnames and complete absence from 99% of the trailers says these ladies might as well have expendable written on their foreheads. Expect them to go the way of Drew Barrymore in the first scene. But not before making out.

Why them? Because if, by some miracle, they do turn out to be the killers, I can say "I totally called it" because I added them to this article.
A previous killer who wasn't quite dead 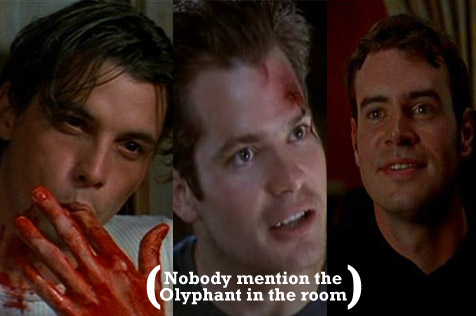 Who they? Slashers of Screams past: Billy Loomis, Stu Macher, Mickey, Mrs Loomis, Roman Bridger. All perps with reason to want to slice and dice Sidney and friends, all dead. Or ARE they...

Why them? Because it's a fourquel and quite frankly, all bets are off: logic and reason bailed out on the Scream franchise around the time Kevin Williamson and Wes Craven decided that yes, they would quite like to get paid again. In movie world, you're not dead until you're shot, stabbed and buried six-feet under, and that might not apply to all of the above.

See also: a character thought dead from a previous film (calling Cotton Weary and/or Randy) or a family member of a previous killer (well hello, Grandma Loomis!). In short: a massive cop-out could be on the cards.
Come on then, let's have your best guesses in the comments - and no complaining if I accidentally guessed right: I'm as in the dark as you are. The prize for the best guess is literally the smallest amount of respect it's possible to receive.

More:  Scream 4
Follow us on Twitter @The_Shiznit for more fun features, film reviews and occasional commentary on what the best type of crisps are.
We are using Patreon to cover our hosting fees. So please consider chucking a few digital pennies our way by clicking on this link. Thanks!