Hang on, I could've sworn we all hated Jim Davidson?

There was surprise this week in my household, which consists of me, that Jim Davidson won Celebrity Big Brother. I was under the impression that everyone thought he was a cunt. Then I realised something: he won because he's a cunt.


God forbid an uninformed opinion should emanate from these pages, but I haven't watched Celebrity Big Brother this year, or indeed any year since Mark Owen and his yak's wool cardigan won it in 2002. Still, it occurred to me that Jim Davidson's victory is emblematic of the public's desire for hate-following.

You know hate-following. You hate-follow Piers Morgan on Twitter. He tweets eight or nine things a day obviously designed to encourage opprobrium, or engages in witless #bantz with Premiership footballers who unaccountably choose not to just ignore him, and you fucking hate him for it, which is why you follow him. I do it too: I follow people and organs with whose opinions I vehemently disagree, because on some level I enjoy being enraged. It reinforces my sense of who I am; allows me to define myself in opposition to something. You're wrong, I tell the ghastly opinion-spewer on the screen, and so I must be right. It feels good to be right. This is why MailOnline is so successful, other than the masterstroke of having a sidebar that encourages the reader to fantasise sex with 12-year-olds: it deliberately posts articles that are designed to infuriate you so they go viral. Look at this, I tweet, alongside the link. Read this and agree with me.

Reality TV seems to work along similar lines nowadays. Gone is any pretence of social experiment. We also passed critical mass for considering it merely harmless, trashy entertainment a few years back, and now seem to have settled on it as catharsis. "Look at these idiots," we say. "Aren't they hateful? I hate them so much." The first thing I ever wrote on this site was essentially this: the sort of snarky attempt at a takedown piece the internet could do with a lot less of. I wouldn't write it now; not because I'm above it, but because I think it's a waste of energy. 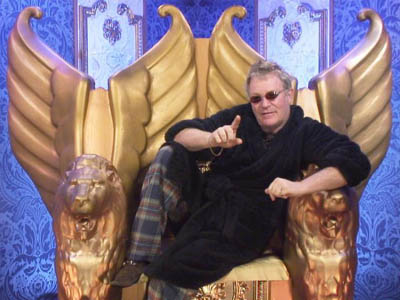 Look at him. Look at the man you crowned your king.


So then: Jim Davidson is, as far as I'm concerned, a racist, a sexist and a homophobe. He is also a comedian who is not funny, and is at least partially responsible for the sustained career of John Virgo, a man who consistently misinterprets the role of the snooker commentator as that of a rally-rousing town crier. When Jim Davidson is put on a reality show, it is to provide the viewer with a hate figure. Ideally for Channel 5, he'll say something racist, as Ron Atkinson did last year, and they'll get a load of free publicity while claiming the moral high ground for censuring him.

I'm not sure anyone at Channel 5 or Endemol particularly expected him to win; more likely he'd put his foot in his mouth early on and be evicted amid the aforementioned headlines. But given that he did, consider the mechanics of how this came about. Big Brother viewers, presumably, disliked him as anyone would. But each time the opportunity arose to vote him out, they made the effort to keep him in. Why? Because the point of the show is to focus your hatred on someone. Without a bête noire, who's left? Some glamour models and a singer known chiefly for wearing silly hats, who appears not even to do that anymore.

Voting to keep a show entertaining went a step too far and ended up seeming to denote actual popularity, but you can't have it both ways if you live by the text vote. X Factor judges encourage novelty acts like Wagner and Jedward because they know the viewer likes to laugh at them, but if they make the final four it's all stern faces. "I think this was a step too far for you, Wagner," they admonish, as if to say, Sorry, this is the business end, and it's time to take it seriously: this tarted-up popularity contest is a matter of grave import and you are cheapening it. But one year soon they won't be able to stop it, and The X Factor will be won by a deliberately terrible knockabout act, behind which the Cowell machine will be forced to throw its promotional weight.

This will, of course, be brilliant. But the fact that Jim Davidson has won Celebrity Big Brother is not. It will briefly elevate him to slightly higher public status than he held previously in his autumn years of ailing celebrity, and it will earn him some money. He might even resurrect what appears to be his dormant Twitter account, which I will then be forced to hate-follow. I blame myself.

More:  Jim Davidson  Celebrity Big Brother  Big Brother  Channel 5
Follow us on Twitter @The_Shiznit for more fun features, film reviews and occasional commentary on what the best type of crisps are.
We are using Patreon to cover our hosting fees. So please consider chucking a few digital pennies our way by clicking on this link. Thanks!