In preparation for tonight's premiere of Red Dwarf X on Dave, why not watch two grown men discuss their fondness for a classic British sitcom, and shamefully admit to one another what merchandise they own?


Ed: I should say right off the bat that I never thought Red Dwarf was the funniest sitcom on TV; far from it. But due to its setting and the licence it gave the writers to be inventive, it always did really well on the 'sit', even when the 'com' wasn't quite there. And given that, it's kind of weird looking back that I always liked it so much, because I was never a huge sci-fi fan as a kid. What appealed to you more: the comedy or the sci-fi?

Matt: Definitely the sci-fi. What's always struck me about the show, even after I stopped being such a big fan during the later series, was that the sci-fi elements were always so brilliantly inventive. It wasn't just "here are some aliens, they look silly", it was dimension jumping and aliens that swallow emotions and jumping into photographs and planets created by a person's own consciousness, and then the comedy came out of those situations.

For example, the idea of introducing luck as a virus always interested me more than seeing that play out. And to be honest, as the years have gone on I think I've outgrown the comedy tone of the show, but I will always consider myself a fan because I'm always fascinated by the stories in each episode. 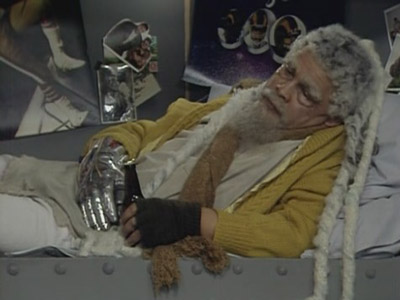 This is what crack does to you, kids. This man is 25 years old.

Matt: And of course the overall story. I've been watching Red Dwarf since the very beginning and the first thing that captured my attention was Lister's mission to get back to Earth and what he might find there. It's something that has lost its way in later series but was covered excellently in the novels. Have you read the books? I remember owning the 'Smegazines', the Smeg-Ups videos, all the books; it had a real cult-TV presence for a long time. How far did you get involved in the 'extended universe' of the show?

Ed: I read both the first two books quite a few times (think there were more after that?), and used to pass off lines from them as my own at school (as you can imagine, chicks REALLY dig that). I had all first six series recorded off the TV and I think a Smeg-Ups VHS too. The Smegazines sound AMAZING but I never had any. In many ways, it's a good job we didn't go to school together. We would've been bullied relentlessly.

Matt: Yeah, there were two more books after Better Than Life, but they were written by Doug Naylor and Rob Grant separately - both very good though. The Smegazines were good fun but I can't remember too much about them other than that they contained the occasional interview, a comic-strip version of the first few episodes and, invariably, a badge sellotaped to the front. I think I still have them somewhere - badge intact because I knew they'd be worth a fortune some day. (*Quick eBay check*) Yep - about £1 each. Shit. That's actually less than I paid for them at the time. 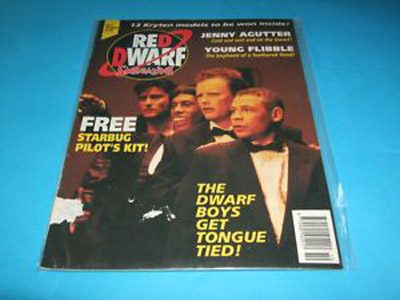 It's OK to be jealous, guys.

Ed: Shrewd. While as you say it's got a lot less funny over the years, I continue to think the writing is hugely inventive. The idea of a creature that evolved from cats over three million years and is now humanoid, but retaining all the vanity and aloofness that cats exhibit, is incredibly clever, for example. Proper sci-fi fans are the most discerning audience there is, and this is the kind of thing that's earned its cult status.

Over the last couple of weeks I watched from series seven onwards on Netflix, of which I'd only seen a couple of episodes before. What I liked most about the eighth, where they end up back on Red Dwarf, is the refocusing back on the relationship between Lister and Rimmer, when they're in the prison cell together just talking for long periods. That's where the whole thing started for me, and its main strength: there's a personality clash between them, but they keep each other sane.

In the early series it used to bug me that they shared a sleeping quarters when there were hundreds of empty ones to choose from. Obviously that's mainly a narrative device, but it's also explained away by the fact that they need each other, not that they'd admit it.

Matt: That's an interesting take on the eighth series. I can't remember too much about it, to be honest, because I'd lost too much interest by that point and couldn't believe they completely messed with the formula, ie the 'sit' of the sitcom was that Dave Lister was the last human alive, but this series might as well have been a completely different show. 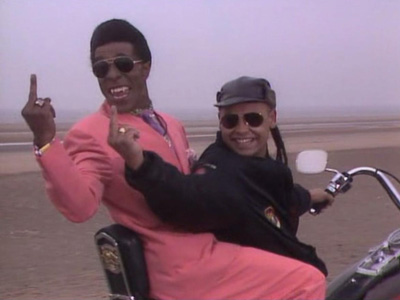 "Up yours, narrative integrity!"

Matt: You're right about Lister and Rimmer though. The thing about their relationship that always stuck with me is that line in the first episode when Holly says Rimmer is the only person of the entire crew that could keep Lister sane, and that's why he was brought back. I think that's why the episode 'Marooned' is often quoted as one of the show's best - it's just the two of them in a room baiting each other.

But even after the eighth series it got worse with 'Back To Earth' two years ago, which was very cinematic and self-important without actually being all that funny. I appreciated the plot and the Blade Runner homage, but overall it felt like an exercise in 'writing clever sci-fi' nonsense. What was your take on it?

Ed: I actually liked the fact that it was cinematic, with no laughter track. But the whole thing smacked of 'have your cake and eat it' writing for me.

Thing with a show like Red Dwarf is that the sci-fi setting allows you to do anything at all: go back in time to the Kennedy assassination, go to a planet which is Earth but backwards, get in a virtual reality simulator and head to the Wild West, or into the story of Pride and Prejudice, and so on. Same thing as Quantum Leap, essentially. But because of that I think the writers' instincts need to be curbed every now and then. Taking them back to Earth, but to this time period where they can make lame topical jokes about the recession and end up on Coronation Street, all felt a bit too self-congratulatory to me. And the Blade Runner homage should've been a lot subtler. In particular, the fact that they flat-out mentioned Blade Runner was the final nail in the coffin. 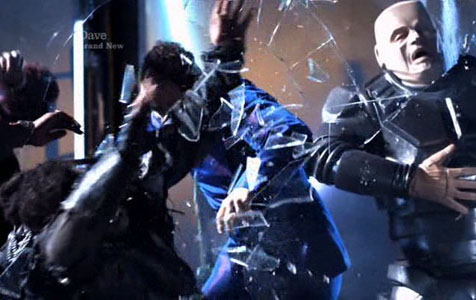 Jesus, guys, we get it already. BLADE RUNNER.

Ed: You've seen the first episode of Red Dwarf X already, right? What did you make of it?

Matt: I've seen the first couple of them and I really like it so far - it seems like a real return to basics. Doug Naylor has stopped trying to tell the epic story of Red Dwarf trying to get back to Earth, or Lister finding out he's his own dad, or searching for Kochanski, and just stuck with the original formula: four characters stuck in space with nothing much to do. This way, more effort seems to have gone into the dialogue rather than the plot and it makes for the funniest episodes I've seen in years.

Ed: I'm really glad to hear that. As much as the quality's slipped gradually over the years, there's no reason a back-to-basics approach shouldn't produce something great when all the original elements are still there. You want to come round and watch it? I've got a spare 'Smoke Me a Kipper' T-shirt and 'H' stickers for our foreheads.

Matt: Aw, that sounds... fun. Y'know, I would, but I'm already having a... er... (*checks Radio Times*) Emmerdale party tonight. Sorry. I would have invited you but I knew you had this thing going on so... yeah.

More:  Red Dwarf  Dave  Netflix
Follow us on Twitter @The_Shiznit for more fun features, film reviews and occasional commentary on what the best type of crisps are.
We are using Patreon to cover our hosting fees. So please consider chucking a few digital pennies our way by clicking on this link. Thanks!