Hopes for The Snowman And The Snowdog

A sequel to Christmas classic The Snowman hits our screens on Christmas Eve. I don't know about you, but I'm hoping it desecrates the original and sullies the memories of my childhood forever. Some men just want to watch the world burn.


I bet this trailer is full of lies. It makes you think it's a heartwarming, understated tale about a boy and a snowman and a snowdog, but really it's going to be all Hollywoodized.


When was a beloved children's classic ever given the sequel treatment after so long a time without it farting on the balls of your childhood? That's right, never. So if that's anything to go by, here's what The Snowman And The Snowdog will be like.
It'll be in 3D

Everything's in 3D. Kids don't want to see anything else. It's only adults who realise it's rubbish. So basically it'll be exactly the same as it would've been, only there'll be a snowball thrown straight at you every 15 seconds.
The Snowman will be voiced by Adam Sandler

Off the top of my head I can't think of an Adam Sandler Christmas movie but there's bound to be one somewhere. 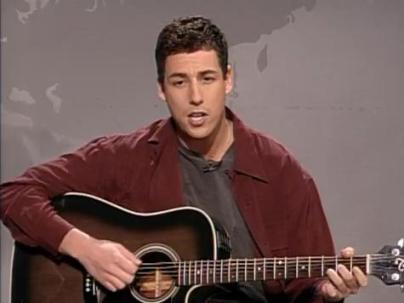 Nope, couldn't find one. But he's probably singing The Chanukah Song here, which is pretty close.

The original was much revered for its voiceless understatement, relying on the music and the carefully rendered animation to draw out its emotion. Nothing like that gets made these days: TV execs would shit themselves at the prospect. The answer: go balls-to-the-wall Sandler on it, and make the Snowman a simple-minded yet gold-hearted New Yorker.
Jar-Jar Binks will be in it

Disney seem to own everything else these days, from Star Wars to very probably the deeds to my flat, so it stands to reason they've most likely got a chunk of the Snowman franchise. They'll be wanting to start the Star Wars episode VII cross-marketing as soon as possible, so expect an oddly-shaped snow mound to suddenly explode (with bits of 3D snow flying at you, obviously) to reveal Jar-Jar, saying "Ohhh, whosa gotta mince pie for Jar-Jar?" or something. They'll probably punch up the dialogue a bit. But not much.
Yeah, that'll probably cover it. You might reasonably argue that Channel 4 isn't particularly influenced by the trends of Hollywood, that they are in fact two entirely separate entitites and therefore that assuming any correlation between what one and the other does is spurious at best. But by way of counterargument I'd say (*sound of door slamming, car starting*)

More:  The Snowman  Childrens TV  Channel 4
Follow us on Twitter @The_Shiznit for more fun features, film reviews and occasional commentary on what the best type of crisps are.
We are using Patreon to cover our hosting fees. So please consider chucking a few digital pennies our way by clicking on this link. Thanks!