This is not your run-of-the-mill TV blog, you know: it's far more haphazardly maintained than that. And it uses a cheerful pink/purple colour scheme. As such, I refuse to use these pages to speculate baselessly about possible creative directions for TV series in reaction to the slightest piece of promotional material spat out by the networks. It cheapens you and it cheapens me.

Having said that, there's something in my contract about having to write stuff or my feet will be broken with hammers, so here: four pictures, with definite, fact-based meaning attributed to each. First:
Sally Draper is now a snooker referee 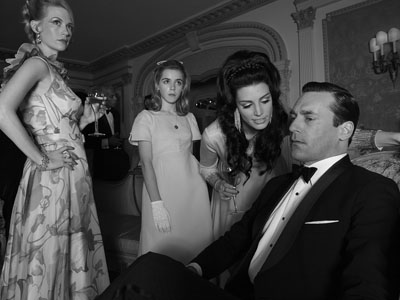 She is wearing white gloves indoors. Only two types of people do that: white supremacists and snooker referees. And there's scant evidence that I did anything other than make up the white supremacists bit, so it must be the latter.

The narrative implications at this point are murky at best. Assuming we haven't jumped forward in time to the late 1970s, when the influx of TV revenues and tobacco sponsorship catapulted snooker into the public consciousness, Sally's chosen career is likely to prove a significant conflict as she struggles to establish herself on the circuit, a woman in a man's world that in reality didn't accept a female official until Michaela Tabb refereed her first professional match in 2002. As ever, Mad Men will shine a light on the inequalities of its age.
Peggy has no legs 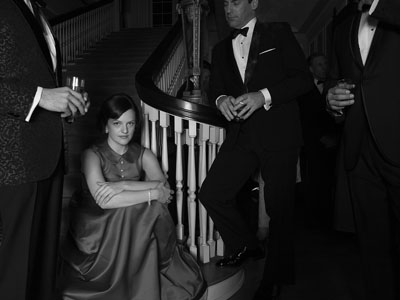 There is no other reason why she should be sitting down on a flight of stairs: Peggy has lost her legs, possibly to grisly amputation at the hands of the Manson Family; possibly to an industrial accident enabled by the lax approach to health and safety in the 1960s. At this stage, we just can't be sure.

Of course, this raises the question of how the characters will deal with disability and what place there is for Peggy in a world full of legs. As ever, Mad Men will shine a light on the inequalities of its age.
Pete Campbell now roadies for The Grateful Dead 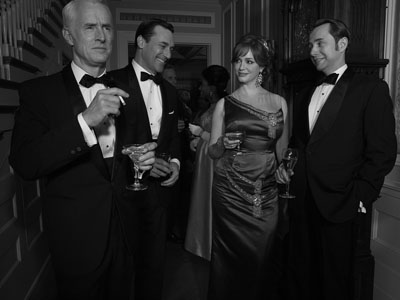 The characters' gradual embracing of the counterculture was a key feature of season five, bringing with it Roger's LSD awakening and Don's hanging around backstage at a Stones concert wishing he was somewhere else. Pete Campbell's sideburns suggest – no, prove – that he is following suit.

Obviously, we are now in 1969 and he has seen Easy Rider, stuffed a daisy down the barrel of a rifle, burned a bra in protest at the Miss America Pageant, turned on, tuned in and very probably dropped out. All while maintaining a career as an account manager for SCDP. As ever, Mad Men will shine a light on the— no, wait, that doesn't even work here.
Harry Crane is less universally hated than he was 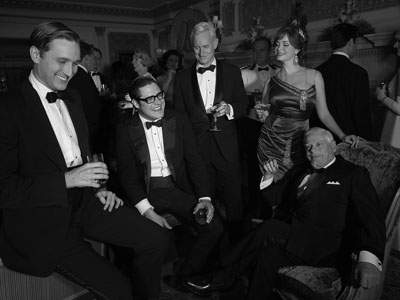 More:  Mad Men  Jon Hamm  Elisabeth Moss  Vincent Karthieser  John Slattery  January Jones  Christina Hendricks  AMC  Sky Atlantic
Follow us on Twitter @The_Shiznit for more fun features, film reviews and occasional commentary on what the best type of crisps are.
We are using Patreon to cover our hosting fees. So please consider chucking a few digital pennies our way by clicking on this link. Thanks!