This isn't going to be one of those cringeworthy, 'Dear Hollywood, you should make a sequel to one of my favourite movies, so here is my idea for that sequel, so let me know when you are planning to make it' type fan posts. No. This is an entirely serious discussion about the viability of a Demolition Man sequel, complete with my proposal for a sequel, along with- shit, wait, that's exactly what it is.


I have written about Demolition Man at great length before: about how it is one of the last truly great pre-CGI action movies; about how it's one of the finest examples of an old-school action hero blockbuster; about how weird Sylvester Stallone's nipples are in it. I will spare you further essays on the condition that if you haven't seen it, you do get acquainted with it. I wish I was watching it right now instead of writing about it. I'm sure you wish you were watching it instead of reading me writing about it too.

Despite the fact it was a smart, self-reflexive, savvy action movie set in the future, Demolition Man got left behind in 1993. It didn't do great numbers at the box office, Stallone's career was starting to stiffen, and just one year later, Keanu Reeves and Speed proved you didn't have to be an insanely jacked steroid abuser with arms like huge veiny dicks to be considered an action hero. It was also incredibly expensive to make thanks to a reliance on practical effects and massive pyrotechnic stunts that'd shit up your dog from two towns over. It is the most 1993 movie ever made.

Over time, '90s action movies came to be seen as a sort of quaint commodity; the Expendables series basically rounded up Stallone and his genre stablemates to take the piss out of them like museum exhibits. The really memorable action properties from the era were repackaged or remade: Rambo got a post bus pass run-out and even Rocky rallied with a mini revival. But there was no love for Demolition Man. No love for its cynical view of a sanitised and overly-sensitive California (accurate), no love for its prediction of Arnie's political career (also accurate), no love for its casting of Denis Leary as an underground freedom fighter (fair enough, actually).

Just like Stallone's character John Spartan, Demolition Man was fossilised and frozen in time. And just like in the movie, the time will come when the powers that be would be wise to hit the 'defrost' button. Demolition Man 2 must become a reality, and the people are already willing it so.

RT if you would buy a ticket to see Demolition Man 2 in a heartbeat pic.twitter.com/VcIPYI1c81


For starters, the action genre is ripe for a poke in the ribs right about now. What even is the action genre in 2017? Take away superhero movies, Transformers and your po-faced John Wicks of the world, and what have you got? We've moved past blowing shit up for fun and making wise-ass remarks, for shame. Action films can be violent, clever and fun - you don't have to pick two.

Let's break down what the first Demolition Man left on the field. You've got old school cop John Spartan thawed out in the San Angeles Of 2032, presumably still shacked up with retro-aficionado Lenina Huxley (Sandra Bullock, schedule pending) and still raising one quizzical eyebrow at the massive collective pussy humanity has become. You've got a terrifying future world with flying cars and sex hats and novelty ways of wiping one's anus. You've got gags at the expense of ubiquitous corporations, and a healthy suspicion of the moneyed and wealthy. This is a satirical universe which begs further exploration. 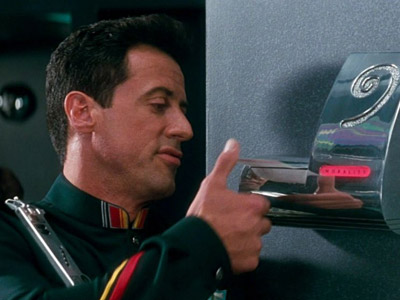 Maybe not the seashells thing though.


The key to this isn't Stallone, the old war horse still chewing the same old hay - it's Wesley Snipes. Oh yes. Fresh from prison and keen to get all caught up. Sound familiar? Simon Phoenix, the homicidal maniac, was killed at the end of Demolition Man. You remember. He dies in the exact same way the T-1000 (almost) died in Terminator 2 one year prior, by being frozen by liquid nitrogen and subsequently shattered.

Fuck all that. Bring Simon Phoenix back. It's the future! Make something up! An ex-government behavioural scientist unlocks Simon Phoenix's chaotic DNA and accidentally creates an entire army of Simon Phoenixes, all dressed identically in orange vests and denim dungarees. They encourage each others' darkest impulses. They kill and fuck and multiply until San Angeles is flooded with Phoenixes, all risen and determined to burn the city to ashes.

That's when John Spartan steps up with his masterplan: he'll have to thaw out his old 1996 buddies to help him bring the Phoenix army to justice. There's Chopper (Jason Statham), Gripper (Michael B Jordan), Eggy (Oscar-winner Adrien Brody) and Rosbif (Jean-Claude Van Damme). Either that or he has to shrink himself and inject himself into Simon Phoenix's bloodstream to stop him at a chromosomal level. Or travel back in time. Or become a robot. Or there's some sort of big climax on a zeppelin. I don't know, I haven't worked through it yet. I'm not going to sit here and share all my billion-dollar ideas with you.

I digress. Demolition Man is 25 years old next year, and to be honest, Stallone hasn't got that much left in his back catalogue to raid (two of the films he has listed on IMDB as 'coming soon' are sequels to Escape Plan). The concept is future proof and chimes with Stallone's whole 'analogue dude in a digital era' thing. The film has grown in status since release and has become a subversive cult classic. Wesley Snipes resurrection has already been branded as the Wesurrection. There's a hashtag waiting. I will make myself available for screenwriting duties.

I've put the word out.

@TheSlyStallone Hello Sly. Please make Demolition Man 2. I will write it if you want. The world needs more John Spartan. DM me if interested

@wesleysnipes Hi Mr Snipes, I'm doing important film journalism: would you be open to doing Demolition Man 2 as an army of Simon Phoenixes?


Now we play the waiting game.

More:  Demolition Man  Sylvester Stallone
Follow us on Twitter @The_Shiznit for more fun features, film reviews and occasional commentary on what the best type of crisps are.
We are using Patreon to cover our hosting fees. So please consider chucking a few digital pennies our way by clicking on this link. Thanks!