Interview: Drew Goddard, co-writer & director of The Cabin In The Woods

Having seen a top secret screening of The Cabin In The Woods a while back, I've been going out of my mind wanting to talk about it with people, but it's really one of those films where it's better you know as little as possible. Being offered the chance to talk to Drew Goddard - Cabin's co-writer and director - was the perfect opportunity for me to enthuse about the film and gain a further insight into how a movie as awesome as The Cabin In The Woods came to exist. Don't worry, it's spoiler free! 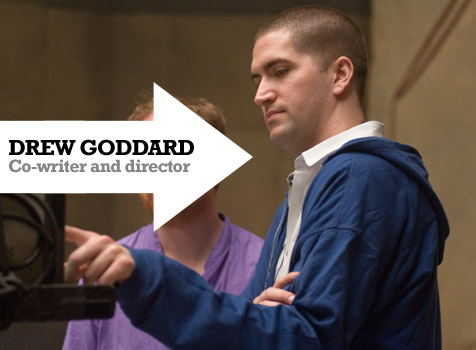 : I loved The Cabin In The Woods. Crazy loved it. You must be very proud of it.

Drew Goddard: I really am, it's nice to hear other people feel the same way about it.

: It's one of those rare films that comes along every once in a while that treats its audience with respect and not contempt.

DG: Thank you, that was definitely important to me, I hate films that talk down to the audience.

: If you can even remember that far back, can you talk me through gestation of the movie and all its delays?

DG: It started when I wrote the movie with my partner Joss Whedon, who also produced it. I started my career as a writer on Buffy The Vampire Slayer for Joss and we just enjoyed writing together, so we were looking for a project to do after those shows went off the air. We were batting around ideas for movies, and he said 'I've got this idea for a movie about a cabin in the woods'. As soon as I heard just that, I was like, I'm in.

I love cabin movies and I love horror movies in general. Really it just stemmed from that; we just sat down and said 'Let's say we get the chance to build the ultimate horror movie and pack everything we've ever wanted into one movie – what would we do?' We didn't pitch it to studios, it wasn't an assignment, we just wrote what we always wanted to see and hoped someone would let us make it. It was a dream, because they said yes to everything and we got to do it the way we wanted to do it.

Then around 2009, the studio [MGM] went bankrupt, they got caught up in the financial trouble that hit the globe so we got delayed for a little bit. But it all got untangled, and Joss and I joked that it turned out to be the best thing that could have possibly happened to us, because we're now at a studio that's our new home [Lionsgate], they've been wonderfully supportive. Also, our actors have gone on to become big stars! We got the God of Thunder! You learn to be careful what you worry about because sometimes what you think is bad can turn out to be the best thing for you. 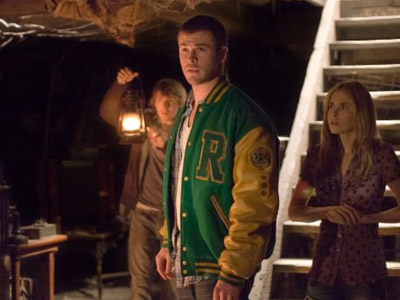 : You said you love horror films, but Cabin almost feels like a reaction to bad horror films.

DG: There is a little of that, and I can see why people think that, but it's much more a celebration of what we love about horror films. Because we love horror movies and we wanted to write a love letter to the genre, and then cover the love letter with a little bit of hate, as Joss likes to say.

: While Cabin was on the shelf, did you see any horror films play out the clichés that you guys were lampooning in Cabin?

DG: Good question, I gotta get my timeline right... I'm sure there were. Again, it's not just about clichés but it's about mythology and storytelling and certainly with Cabin, it's about what you've come to expect and want from the genre. So some of the good horror films, they still follow the same rules that you need to follow.

: What were you looking for when casting, given this isn't really a conventional horror film?

DG: We wrote the roles for Bradley Whitford and Richard Jenkins. That's what we wanted, and we knew even just by casting those two guys it'd immediately tell people this isn't your average horror movie. Just the fact that they're in this is the first clue that things are going to be a little different. Then with the kids it was all about just finding the right fit; you have to get five kids who play well off each other and then can vacillate between tones. That was definitely the hardest part of casting Cabin because we ask so much of our actors – we ask them to go between hardcore horror to drama to broad comedy and often in the same scene. It's tricky, so we looked at hundreds of actors to fill these roles. 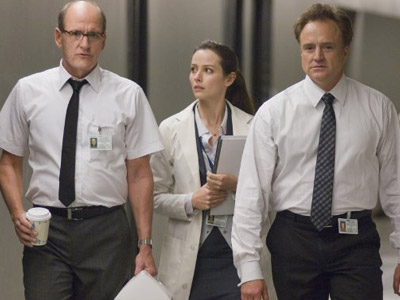 : Without spoiling anything, the movie gets crazier and crazier towards the end. Was there anything you had to leave out?

DG: [laughs] You know what, I actually got to do everything I wanted to do! Believe me, I'm still in shock on some of the things we were able to get away with.

: I can't wait to watch it again with a director's commentary. Are there any easter eggs to look out for on a second viewing?

DG: I have a very short attention span and nobody has had to watch this movie more than me, so I'm constantly putting things in. I hear from people when they've watched it again that it's a whole new movie, because we really tried to layer in the things that are going to happen in the last third throughout, and once you know what's coming, you can look for it. Hopefully it's a more fulfilling experience. 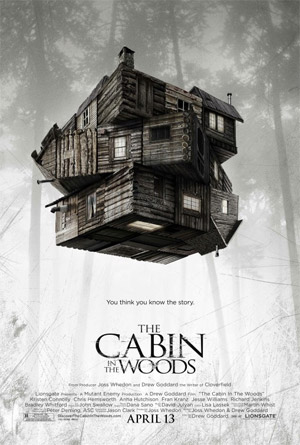 : What were your thoughts on how to market the film? Obviously it's not your department, but given that so much of it is best kept a secret, how much were you willing to give away?

DG: It's that tricky balance. The filmmaker in me doesn't want to give anything away. But I also respect that you need to prove to audience that it's worth their time, so it's just finding that balance. Luckily, Lionsgate understood the best way to do it and said, 'Let us show you the trailer, let us show you the artwork and just see what your gut reaction is' and when I saw that first trailer, I said, oh, that's it, perfect. Obviously I wish people would just go in fresh because that's definitely the best way to watch Cabin, is to know nothing. But audiences need to know we're not just screwing around and this is not your same old movie.

: It's almost a good hook in itself, that you're not allowed to know what it's about.

DG: What's nice is that we found that most people who have seen the movie don't want to talk about it, they want to protect the experience they just had for other people. I wasn't expecting that. I hear a lot of people doing our work for us, in protecting the twists and turns of the movie.

: This might sound like a silly question, but if the movie is a success – and it deserves to be – could you ever envision a follow-up?

DG: You know, one of the favourite moments of my life was when I went and saw Douglas Adams talk. It was shortly after he had written Mostly Harmless, I think it was, the one where he ends all the universes, and people asked him, 'Could you make a sequel?' He said, 'Well, it's fiction, it's science-fiction and it's comedic science-fiction, so... there's always a way.' Certainly we didn't set out to make a franchise with Cabin, we just set out to make a great movie. I'm a little tired these days of everything just feeling like it's part one. I'm like, just give it to me. So I wanted this movie to stand on its own, but that being said, I love this universe and if there's a way to return to it, that we could do without dishonouring what we've already done, I'd be all for it.

: It's pretty definitive at the end.

DG: It certainly is. [laughs]

: I'm sure you've been asked this question a hundred times, but I have to ask about Cloverfield 2 or the internet will take my badge away. Any developments on that at all?

DG: No news, but one of the nice things about having an 800lb gorilla like JJ [Abrams] in your corner is that he can say to a studio, look, we're not going to make a sequel just for the sake of making a sequel, we're only going to do this if it's something that excites us all. Cloverfield is very much a three-way conversation between myself, JJ and Matt Reeves the director, and I think that all three of us feel like we just need to get in a room together and hash it out. Unfortunately, those guys are very busy. 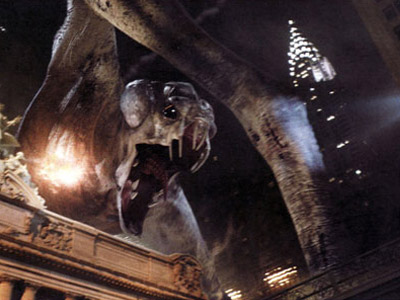 : Have you watched the original Cloverfield lately? Is there anything you like or dislike about it that you'd do differently next time?

DG: There always is, it's always the case with everything I've ever done, you always see ways you could make it better. But I was definitely struck by, once trouble hits in Cloverfield, how it really doesn't let up. I like the moment when I was struck by how relentless it is, and it's really a credit to Matt that he just kept pounding away at it.

: Do you still think the handheld format is still essential to Cloverfield?

: What can you tell us about Steven Spielberg's Robopocalypse? That's a hugely exciting film right there.

DG: It's based on a great book, written by Daniel Wilson. Daniel's an expert in robotics, he has a PhD so the book is very much a hard science look at what would happen if our technology turned on us. The good people at DreamWorks and Mr Spielberg asked me to adapt it, and I did, and hopefully that will begin shooting this year.

: How massive is it gonna be?

DG: [laughs] They're not holding back. This is Spielberg at his best.

: I know it's early days but Cabin will be one of our top films of the year, so congratulations on making a fantastic movie.

DG: We've got a lot of good films coming out this year, so I will not hold you to that, but that's so nice! That means so much to me, you've totally made my day, thank you so much!
The Cabin In The Woods is released in the UK on Friday April 13th. If I haven't already made it abundantly clear by now, you really should go and see it as soon as possible.

More:  The Cabin In The Woods  Drew Goddard  Joss Whedon  Chris Hemsworth  Richard Jenkins  Bradley Whitford
Follow us on Twitter @The_Shiznit for more fun features, film reviews and occasional commentary on what the best type of crisps are.
We are using Patreon to cover our hosting fees. So please consider chucking a few digital pennies our way by clicking on this link. Thanks!