To promote the new series of Red Dwarf, the good folk at Dave allowed me some time with Chris Barrie and Robert Llewellyn (Rimmer and Kryten, as if you didn't already know) to ask them all manner of things 'Dwarf'. Upon arrival, I was a little sad to see they weren’t actually wearing prosthetic masks or a plastic 'H', but then I was wearing a t-shirt and a hoodie so I couldn’t really blame them for not making an effort.


I was actually speaking to them as part of my day job at Virgin Media, for which I asked them to discuss their favourite Red Dwarf episodes of all time. But that didn’t take long and, when I had finished, the PR lady still hadn't come back into the room, so what follows is the transcript of me asking the first questions that popped into my head as I desperately worried that I would run out of things to say. Of course, if anyone asks, this is a fully prepared, official interview. 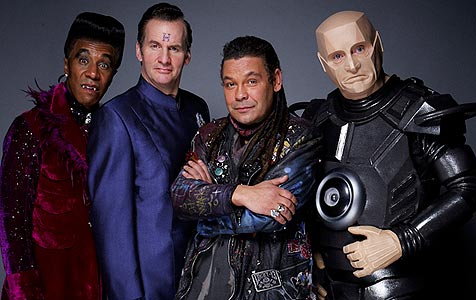 : So much has happened to the Red Dwarf crew over the years. What can we expect from the new series?

Robert Llewellyn:: It just feels like a rich, colourful vein of what you would expect from Red Dwarf but probably not in the way you would expect it. So I’m reading it for the first time and going "Oh!" and that’s what I think really drives the show. We’ve all said that when we read the scripts for the first time, we feel a bit of dread and think "Oh god, what's it going to be like?" and then go [acts impressed] "Oh. Mmm-hmm…hmm… bloody long speech for Kryten. I'll ask them to cut that… Oh I see…".

And I went for a walk with the dog and this script and it was only when I was about two miles from home that I realised "Oh I’ve just been reading this fucking script all the way up the hill". It was a misty morning and no one was about so I was doing my parts in the Kryten voice out loud…

Chris Barrie: That's the thing with the Red Dwarf scripts. You can't put them down, y'know. Doug Naylor is a genius because he comes up with these extraordinary pieces of writing again and again – these multi-layered ideas. It's just absolutely staggering really.

RL: Even with this series there was a point when we didn't have the script for that week and we thought "Oh god, what are we going to do?" and then we learned that, because of budgets, we couldn't do the two scripts that Doug had written… so he just wrote two more! And they were brilliant! There was no "Oh this week we’re going to have to do a bit of padding, guys. You’re going to have to do a funny walk and then Chris will do a face…". He’d been up all night.

And that was always the case – I remember when Rob [Grant – former co-writer] and Doug wrote the show together, they'd come in during the morning and say "we’ve got something for yer" and they had been up literally all night – they hadn't slept a wink – rewriting that week's episode.

CB: And, in this series, there are six cracking stories. Some stories have got multi-layered imagination. One or two of them are simple stories but fantastic just the same. And there's usually two stories running through each. I honestly think this is some of the best stuff we've ever recorded. 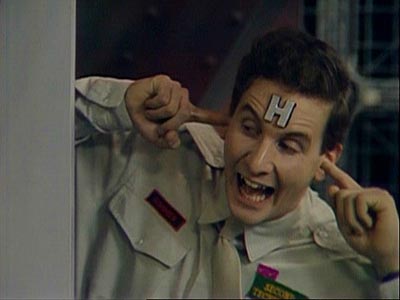 : It has been announced that the last episode of this new series is called 'The Beginning'. With the first ever episode entitled 'The End', many fans are proposing that this might be the last ever series...

RL: I can’t tell you how many tweets I got when the titles were revealed. I hadn't really cottoned on to that either. I think Doug has been doing a very good answer to that question which is a head move that is essentially a nod-shake hybrid.

: So will there be more series after this one?

RL: We don't know, but it's certainly being discussed and it's on the cards. I imagine we'll have to wait until this has gone out and we'll see how this is received. And I think that if Dave is inundated with hate texts, tweets and emails then we might have second thoughts [mock outrage] "That’s the worst thing you’ve ever put on Dave – it’s shit!"... but there’s certainly talk of doing more.

CB: This series is certainly not a Red Dwarf closer: "thank you and goodnight". It’s very much a rebirth – a new phase really.

: What was it like to film in front of a studio audience again?

: Does the audience help your performance?

RL: Yes, the difference is huge. I mean it’s agony, and murder and terrifying but it's so much better because you just know when you're doing it that this is proper – this is how it should be.

CB: And these audiences were easily the best we've ever had. They have to spend long evenings sitting in what are not the most comfortable seats to sit on in the world and they were right on – they didn’t falter by one decibel. We'd never want to do any Red Dwarf now without an audience.

People have often talked about a film... we'll always keep doing the series and maybe, if there’s time or the will to do a film, we'll do that as well but I think the series is where it's at.

: Talking of a movie. There was one planned years ago, wasn’t there? How far did that get into production?

RL: I think it got fairly close – we were rehearsing it, we had costumes made and we saw storyboards…

CB: Hotels were booked in Australia, where we were going to shoot it…

RL: And then I think the money just fell through at the last minute. Y'know, it was such a complex conglomeration of finances – some from here, some from there – and then one bit fell out and the whole thing went *fluargh* and it all fell apart very quickly, which was a great shame. 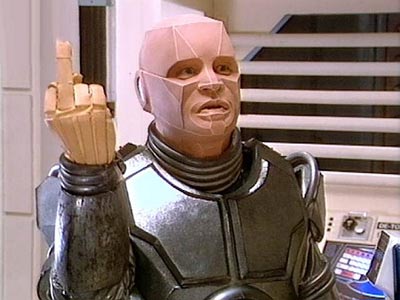 : Do you find that now, compared to the earlier days of Red Dwarf, the internet plays a big role in its popularity? For example, are you more careful about spoilers leaking now?

RL: Yes, particularly with the launch of a series like this. I remember last time, somebody – I won’t say who – mentioned something on the radio that they weren't supposed to mention because we were all still in the contractual stage. And then the thing with that is, when it's on a radio station, within minutes my Twitter stream went insane. It was like "DATA OVERLOAD" and I went "what the hell is that?" And that is extraordinary – the speed with which that happens.

: Were you also aware this time round of drip-feeding fan expectations online?

RL: Yes, of course. In the olden days, you wouldn’t notice but just yesterday I had a tweet saying "Oh my god I can’t believe you’re going to make more Red Dwarf!" like they had completely missed all the news about this new series. And I thought "Well I’ve said it before on Twitter" but that just means that only the thousand people or so on Twitter at that particular moment might have seen it.

CB: I’m not on Twitter or Facebook – I have a website and I get emails, but yeah, there is definite excitement out there about it. When I go out and do conventions and even corporate stuff, you get people all the time asking about it.

: When it comes to potentially filming more series of Red Dwarf, is it difficult to sync everyone's work schedules for it?

RL: I'm sure it will be – in general, mainly with Craig. If I have enough time then I can work my schedule around something, but with Craig it’s sort of out of his hands a bit. Like if he gets a big storyline coming up in Corrie – and they plan years ahead with that sort of thing. The rest of us can rearrange things.

CB: Yeah, the rest of us can sort it out pretty easily.

: Finally, Red Dwarf is such a huge cult phenomenon. Have you ever had any experiences with fans that you felt were a little too crazy?

RL: Craig and I were once in Seattle doing a promotional thing – we were there for hours because there were over 2500 people there and they all had something for us to sign. Anyway, a woman came up who was very, very pregnant and she lifted up the front of her shirt and said "Would you sign my belly" – which we did. Then she ended up giving birth that night and her husband sent us a Polaroid of her stomach afterwards and there were these two miniature signatures on what looked like a deflated balloon. That was fairly extreme - that’s the only pregnant stomach I’ve ever signed, and I’ll be quite happy to never do it again.
There we go. That's what happened the day we met Rimmer and Kryten. Thank christ the first episode of the new series was actually really good, otherwise we'd all feel a little awkward now, wouldn't we?

More:  Red Dwarf  Chris Barrie  Robert Llewellyn  Dave  Netflix
Follow us on Twitter @The_Shiznit for more fun features, film reviews and occasional commentary on what the best type of crisps are.
We are using Patreon to cover our hosting fees. So please consider chucking a few digital pennies our way by clicking on this link. Thanks!