: You said then that you haven’t seen the film – is that a personal choice? ‘Cos, y’know, you should – it’s really good.

: Just because you don’t like seeing yourself on screen?

BM: Pretty much, yeah. I just kinda obsess over the things I could have done this way or that way...or I get too comfortable. The other thing is I can look at them and go “Yeah, that works really well” and maybe that means I won’t try as hard or something. I try to just be a bit more ‘blank slate’ about it. Mind you, having said that, ever since I decided to go ‘blank slate’ about it, I think the quality of what I did improved.

: You’ve got some exciting films coming out soon, including The Killer Elite with Robert De Niro and Cogan’s Trade with Brad Pitt. What can you tell us about Cogan’s Trade first of all?

BM: Well I play a dog-loving junkie thief... [laughs]...and the film is essentially a kind of Aesop’s Fable gangster story where you have these pretty strong archetypes. It’s in the guise of a heist/hitman movie but essentially it’s a bit of a commentary on America really. That might sound a bit highfalutin and weird – pretentious, even – but it’s kind of like a gangster story with very specific aims.

BM: Yeah, I think some of the stuff we did for that was pretty out there and I think that, if it comes together, it could be a quiet storm indeed.

: Here at The Shiznit, we have a particular fondness for the eccentric Nicolas Cage. What was it like working with him on Knowing?

BM: [gets quite defensive] I really like Nic. I’ve done two films with him – there’s another called Trespass, which is coming out shortly. All I’ve ever found with Nic is that he’s a ball to work with, he’s a lot of fun and he’s extremely into what he does. I don’t know Nic outside of work so I can only speak about what it’s like to be on a set with him, but I love it. He’s very alive when he works. And, y’know some of the best people are the eccentric ones.

BM: He’s unpredictable. You don’t know how he’s gonna be. He’s not a hostile person, but he’s someone with very strong feelings and he’s found a way to channel that and make it work. And Nic’s clearly done a mountain of films, and some of them are going to be remembered for a very, very, very long time to come and some of them won’t be. But I would never speak ill of Nic because I adore him. Y’know, I played his best friend and then I played his nemesis...

BM: Ah ok. I was being a tad guarded because I know that Nic is often remarked on for his exterior-to-work eccentricities, but I love him. He's very inventive, he’s very permissive – you can do whatever it is you wanna do. If there’s a problem going on with the scene, he’s very into getting into it and fixing it. But I think he’s incredibly inventive and his body of work is phenomenal. [Ed's note – I tried several times to interrupt and reassure Ben that there was no need to convince me that Nic Cage wasn’t a terrible person, but he seemed determined. I then realised that I had already severely gone over my allotted time.] 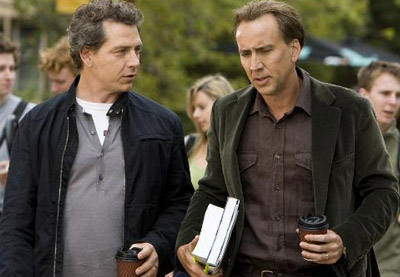 : Last question, Ben, I noticed that one of your earliest acting gigs was on Neighbours...

: During your time promoting Animal Kingdom, have you ever managed to catch up with Guy Pearce and swap Ramsey Street stories?

BM: Well, those guys – Kylie, Guy, Jason, all of the old people that did Neighbours – we’re all that class. In other words, we’re the class of 80-whatever Melbourne Television and that’s ended up being a very heavyweight class. I only did Neighbours for 6 weeks – it was actually the year my voice broke and then I did 6 weeks on Neighbours, such is the life of the odd actor trying to make a buck. But, no, we don’t talk about it, but we’ve all known each other for so long that we’re all very comfortable with each other.

: Good to know, Ben. Thanks very much for your time – it’s been great talking to you.

BM: It’s a pleasure mate. Cheers.
So there we have it. Ben might not be able to recommend Animal Kingdom to you, because he hasn’t even seen it, but I certainly can. This is in no way an interview-related obligation – I mean it when I say you really should make every effort to watch this film. It’s utterly aces.

More:  Ben Mendelsohn  Animal Kingdom  Interview
Follow us on Twitter @The_Shiznit for more fun features, film reviews and occasional commentary on what the best type of crisps are.
We are using Patreon to cover our hosting fees. So please consider chucking a few digital pennies our way by clicking on this link. Thanks!
« Previous Page