Interview with Bryan Cranston: no big deal, happens all the time

Bryan Cranston's performance as Walter White in Breaking Bad is one of the best in the history of television. And as it turns out, he's a stand-up guy too: warm, funny and happy to answer questions. Oh, and he laughed at something I said. I'm brilliant.


This was a round table interview, with four other writers and me asking questions. Thanks a lot to Paul Martinovic from Den of Geek, Morgan Jeffery from Digital Spy, Lorna Cooper of MSN TV and Will from Esquire magazine, whose questions I've reproduced here as well as my own.
Digital Spy: Walt has changed so much throughout the run of the show. Is there any part of you that misses playing the old Walt in this new season or is it fun to just go full Heisenberg and embrace that?

Bryan Cranston: It is. I mean, this is the role of my life. I won't ever have a better role for the rest of my career. But instead of lamenting that or feeling bad, I have the chance to embrace it and enjoy the ride. Especially at my age: I'm 56 years old, and when we first shot the pilot I was just turning 50. And to have that come into my life at that age is unbelievable.

MSN: On a general level, how has Breaking Bad changed your life? Personally, professionally?

BC: It's created a level of professional opportunity that I've never experienced before. When actors first come up, you're auditioning for everything, and you're talking to friends and saying, "What are you up for? What else is happening?" You're trying to sniff it out like a pig with a truffle. And you'll do anything. If your agent calls you and says, "They want to hire you for..." you say yes before they're even finished, because you need the job, you need to pay your rent. So it's a nice problem to have, to get out of that mindset. 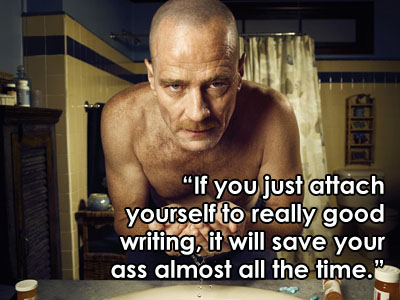 And now the level of product's gone up, and what I feel like I've become pretty good at is being able to identify well-written material. That's the cornerstone. If something is well written, it has the chance to be good. If it's not well written, it will not be good. It could even become popular, but it won't be good. So if you just attach yourself to really good writing, it will save your ass almost all the time. And there's so many things that can go wrong in the execution of a TV show or a movie; so many little elements, any number of things, all the way to marketing. They could market it poorly, then nobody finds it, and down it goes. But if it starts with the foundation of good writing, then you're in the best shape you can be, because that's really all you can control: saying yes to well-written material and no to poorly-written material.

: That ties into something I wanted to ask: over the last few years, we've seen a lot of really good TV roles going to actors who've been around for quite a long time: people like you and Jon Hamm, Kyle Chandler, Damian Lewis. Do you feel like TV is offering better opportunities for actors like you?

BC: It's offering better opportunities for any actor. Because the business model of television has changed. So when I was a kid there were a very select few channels and they were all governed by the same broadcast networks with the same business models. It had to have a large appeal to people, and it didn't offer very much. So that's why we were attracted to independent film: because it was risky, because it told stories that would make us uncomfortable and go in different areas, and not necessarily end up all in a nice little bow.

Now you have a situation where the television world has expanded into hundreds of channels, and networks needs to be able to have their own identity. So in the States, AMC has this credo that if it could be shown on a broadcast network, they don't even want to hear it. "We want the thing that you thought could never be done." And that is like catnip to a writer. "You mean, you want that one that I wrote?" "Yes, that's the one." "But he's a horrible person!" And it's empowering those writers to be able to do exactly what they want. 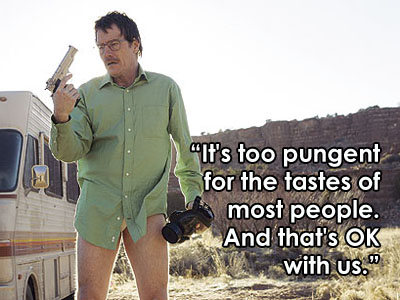 Same with Vince Gilligan. He never thought this would be able to fly. He wrote this on spec; just on his own, because it was in him. Crazy. He thought no one was going to do this. He still didn't believe it when we were going into production! He was like, "You know where I'm going with this? We're going to make a good person into a bad person." "Yeah! Good! OK!" So you have this situation where the nature of the storytelling means it won't ever be a show that millions and millions of people go to. It's too different, it's too pungent for the tastes of most people. And that's OK with us. I think if you try to appeal to the masses, you have to end up watering it down and I think it's better to be specific and be bold in your moves, in your points of view, in your risk-taking.

BC: I don't judge him. I shouldn't; I'm too subjective. It's just a guy trying to get along and do the right thing. We've all done that. Even as children, remember when you told a lie to your parents and then you realised you were in trouble? Then you have to back up that lie, and now you're in deeper. That's what Walter White's life is now.

And interestingly enough, that's what, historically, television watchers have been told: we need to like, and root for, the lead character. It's embedded in our psyche. And now it's different. All the rules are different. But I'll even have older journalists saying, almost aggressively, anxiously: "How are we supposed to like him?" And I'll say: "Are you supposed to?" Where's the rule that says you're supposed to follow some edict? You can go anywhere.

Still, structurally, Vince Gilligan knew that he had to plant the hook. If we didn't plant the hook, and initially sympathise with Walter White, the viewer would never feel this anxiety. So if someone tunes in at season two or three, they won't have the same sympathies as someone who started at the beginning. And it's easy to dismiss it, because Walt's just a bad guy and you don't like him. But if you started with it, you knew that that hook was in deep. And we let the line go, let the line go, and then ... HA! and we start reeling you in. And the viewers are following even though they don't want to. They know Breaking Bad is going to swirl down into a morass of ugliness. It's not going to take a nice little upturn. It's Breaking Bad. It's going to be bad.

And I don't ask what's happening. I don't know how it's going to end. With eight more episodes to shoot before we're done, I have no idea how it's gonna go. 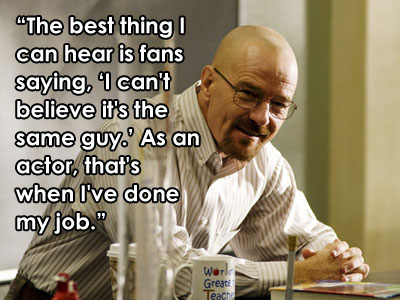 Esquire: A lot of people have said that Walt will ultimately have to die, because of the moral code of the show. Do you have a view on what should happen?

BC: I don't. I try to be objective to it. And I swear to you this is not a cop-out answer, but I want it to end exactly how Vince Gilligan wants it to end. He's the captain; he's guided the story from the beginning, and I empower that. I'm his mouthpiece basically. So people ask me, "With eight episodes left, is there pressure on you to finish it well?" And I say, "Not at all. Not on me. It's all on Vince!"

Den of Geek: You mentioned Vince Gilligan. He's got a lot of respect for his work on The X-Files and The Lone Gunmen, but now he's mentioned as one of these great TV auteurs. Can you talk a little bit about your working relationship with him?

BC: It's been beautiful. I've been very fortunate. And I don't hesitate to mention how this all came about. In fact I think it's my duty as an older guy to mentor young actors and tell them the main component necessary in order to have a successful career in the arts, and that is talent. If you don't feel you have talent, stop now, go back home and get into the family business. And even if you have talent and perseverance and patience, there's still one more component left without which you won't be successful, and that's luck. You have to have luck.

And I have luck. I've had my lucky breaks. I was doing a movie that I wrote and directed, and I just took a flyer, put all my money into it, and my wife and I made this little movie, and we postponed it three or four times. I came back finishing it and I was in town for three days, and my agent called me and said: "There's a role on X-Files: would you be interested?" And I said "Yeah, I'm broke. I need the money!" I got it, and it was written by Vince Gilligan. That's where I met him. Had I not been available I wouldn't be sitting in this chair right now. I know that.

So it frees me up to realise there's no point in worrying about things; things will just flow, and you'll go to the place you're supposed to go. But Vince was my champion to get this role. I will forever be grateful to him because everyone was saying: "You want Walter White to be played by Bryan Cranston, that guy who was in that silly Malcolm in the Middle show? The dad who was afraid of everything?" Well to me, the best thing I can hear is fans saying, "I can't believe it's the same guy." As an actor, that's when I've done my job: to escape into someone else.
More:  Breaking Bad  Bryan Cranston  AMC  Netflix
Follow us on Twitter @The_Shiznit for more fun features, film reviews and occasional commentary on what the best type of crisps are.
We are using Patreon to cover our hosting fees. So please consider chucking a few digital pennies our way by clicking on this link. Thanks!
Next Page »