It's fine everyone, the DVD rental market is alive and well!

And I have anecdotal evidence! Join me, as I tell you what I did on my holid- no, wait, come back!


If you, like me, have children and are greying at the temples, you have probably uttered the phrase "Guh, I'm becoming my Dad!" around ten thousand times already. Well, let me tell you, you do not officially become your Dad until you've driven your family to an activity-filled week at domed tropical getaway Center Parcs. I yelled at the impatient kids in the car. I bought embarrassing shorts. I was genuinely relieved to beat my four-year-old son and wife at adventure golf. R.I.P. my actual Dad, because I am you now and we can't both be you.

I think I watch more films in one week on holiday than I do in a month back home. The kids are extra exhausted and actually sleep. The TV is always standard definition, has shit reception and only E4 works. The Center Parcs gestapo have set up two-step authentication on their WiFi to stop you from casting Netflix on their ancient tellies. But! The local supermarket has a DVD rental section! Remember those? It's like an entire branch of Blockbuster, downsized onto an end-cap shelf, flanked by Peppa Pig books and artificial logs. And it's brilliant!

There is something incredibly calming about being presented with a wall of DVDs, even though you know only about 4% of them are going to be valid options. I will sift through movies Netflix for 20 minutes before giving up and watching Step Brothers again. When you can hold those digital video disc suckers in your hand, there is a palpable choice to make and the struggle is still real, but I found it a much more preferable way of deciding on a movie. Standing there, holding these ancient artifacts in my hand, I felt like Tony Robinson on Time Team, if Tony Robinson had just dug up a copy of John Wick: Chapter Two. 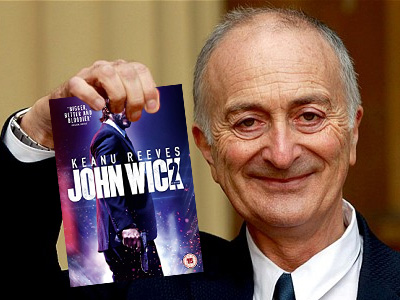 An actual photo of this happening.


So far, so quaint. DVD rental is still a ridiculously antiquated system, but there's something about the enforced time-frame - all DVDs must be returned to the supermarket by 5pm the following night! - that adds a frisson of excitement to the night's proceedings. Keanu Reeves is doing his action thing and I'm doing mine, although in my case, my mission is less about shooting people in the face and more about trying to stay awake past 10pm. I'm ashamed to say that on one occasion I returned a DVD at 5.05pm, but I think I styled it out by being charming and polite and blaming it on my kids or something. If I'm going down I'm taking them with me.

DVDs though! God, how did we ever live like this. You push the open button on the DVD player, then nothing, then you push the power button, then the open drawer button, twice, three times, until eventually it yields, extending its tray with a little mechanical scream. Then a gaudy DVD player O/S loading screen. Then a thank you from the DVD industry (no, thank you!). Then three trailers. It's just like going to the movies! Except at the movies, you don't watch the film on a shit TV that has a remote so prehistoric it literally has a shift button on it that you have to hold down along with other buttons to perform any DVD-related function, and if you accidentally hit '+ Prog' instead of '+ Volume' it changes the input and you can't change it back and have to turn both the TV and the DVD player off and on again. The thrill of the ticking clock in the background. 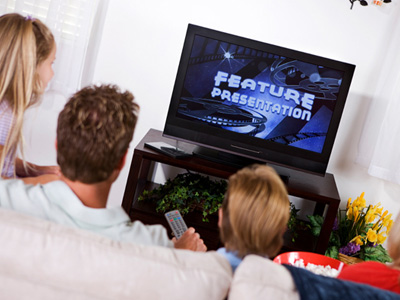 An actual photo of my actual family.


It felt nice to slum it for a while. We watched, and enjoyed, John Wick: Chapter Two, Midnight Special and Lady Ghostbusters. You watch films differently when they are specifically designated as the night's entertainment, instead of one morsel on an overwhelming buffet table. Renting DVDs feels par for the course for a place like Center Parcs, a location that feels very much stuck in a certain time and place. If a DVD rental place sprung up on my high street, I might give it a cursory browse once in a while, perhaps dropping the name of my successful movie blog into conversation with the owner, but fuck off am I paying £4.50 for a DVD, mate, do you know how much Netflix costs these days? Quite rightly, DVD rental got elbowed out the market, relegated to holiday camps and, I don't know, vending machines in airports or something. However, I am grateful it still exists, even in this small form. Mini monuments to former cathedrals of worship. I still remember.

Now I'm back off holiday and the bubble has burst. I have a hundred DVDs in my cupboard I haven't watched for eight years, a thousand movies I might watch on Netflix and yet no actual time to watch any of them. The next notch on the 'becoming yer da' sliding scale is to start watching movies when they're shown on BBC1. I'm actually looking forward to it.

More:  DVD  John Wick  Ghostbusters  Midnight Special
Follow us on Twitter @The_Shiznit for more fun features, film reviews and occasional commentary on what the best type of crisps are.
We are using Patreon to cover our hosting fees. So please consider chucking a few digital pennies our way by clicking on this link. Thanks!