Those crazy drunken folk at Jameson Cult Film Club went and done another one of their spectacular screenings last week, with actors, props and lots of buzzing movie fans all celebrating the brilliance of Monsters (No. 10 in the

's Top Movies of 2010, dontcha know). There was even a Q&A with writer-director-and-thoroughly-nice-bloke Gareth Edwards beforehand. And of course, there was whiskey. By god, was there whiskey…


As near-hazmat-suited attendants greeted us through facemasks at the front door of the Royal College of Surgeons, warnings about the infected zone were abound. And with an eager reporter questioning guests on camera about the ‘alien visitors', it was easy to see that we had crossed over into the dangerous domain of the Monsters universe. We were, however, reassured that it was still safe to drink at the bar so, of course, that's where everyone flocked. 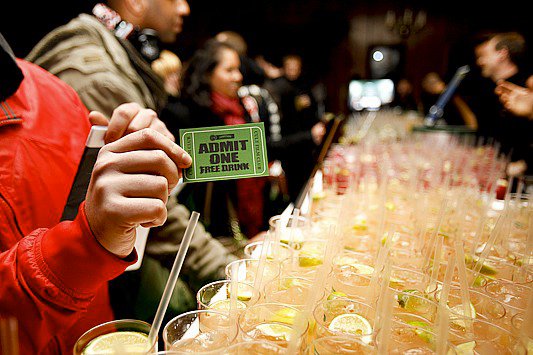 ”Just pour them all into one big glass, thanks.”

While supping on any one of four cocktails, ranging from ‘Mmm-fruity' to ‘Holy CRAP that's strong', there were all manner of sights to behold, not least the close resemblance of the two interactive actors to that of their onscreen counterparts. ‘Andrew' snapped photographs and ‘Samantha' followed him looking a bit lost before they both encountered an armed guard and re-enacted scenes of dialogue from the film as if they were all alone in the original deserted forest setting (they weren't - they were in the bar area with, at any given time, a couple of hundred excitable geeks, hipsters and newbies all loudly gawking at them). 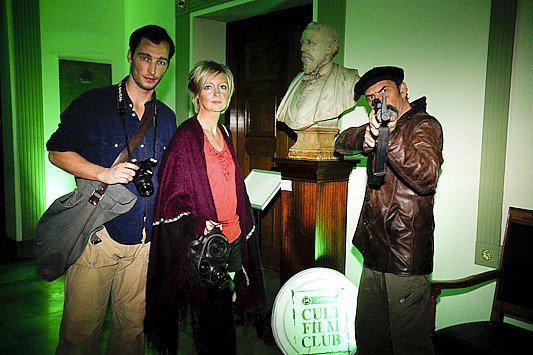 For a few extra quid, they could have got the original stars themselves.

In fact, between the committed actors, the eerily tense atmosphere wrapped up in hazard tape and the more dedicated guests, most of whom wore the complimentary face-masks and some of whom were busy wearing their own gas masks that they brought from home, the only glaring omission was any sign of the actual monsters themselves. And in that respect, it was the perfect tribute to the misleadingly-titled movie. I mean, just like in the film, there was barely any sight of an alien beast, but there was a weird quacking homeless woman: 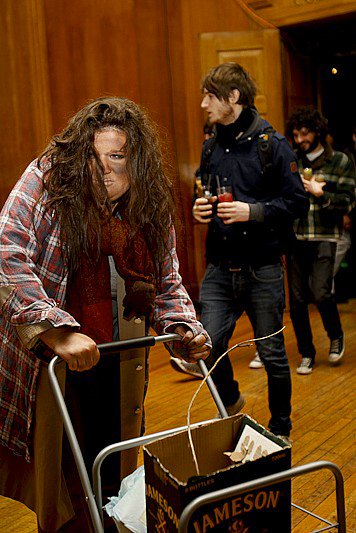 Don't fancy yours much.

As everyone settled into the pews of the over-subscribed hall (some mugs had to make do with the hard wooden floor - sad face), anticipation for the movie was at a peak and yet, before the opening credits started, we were first treated to a Q&A with the Monsters mastermind himself, Gareth Edwards, who was, if you excuse the cliché, refreshingly normal. Indeed, when the host, Chris Hewitt off of Empire magazine, asked the first question, Gareth just blankly ignored him in order to declare how weird the whole spectacle was and that he was, frankly, “shitting himself”.

Often going off topic rather than talk about a film of which he is perhaps now quite bored of discussing every detail, Gareth spoke with self-effacing charm, telling the audience that, typically, a third of us will outright hate the film, because that “tends to be the case”. However, not wanting to miss an opportunity, Chris Hewitt managed to put Gareth on the spot about his announced remake of Godzilla, using all of his journalistic skills and prowess to reveal some new information:

Chris: So what can you tell us about your new Godzilla project?
Gareth: Umm…I'm not allowed to talk about it…er…hey! Look at that man's tie!

So there we go: "man wore tie". Amazing scoop. 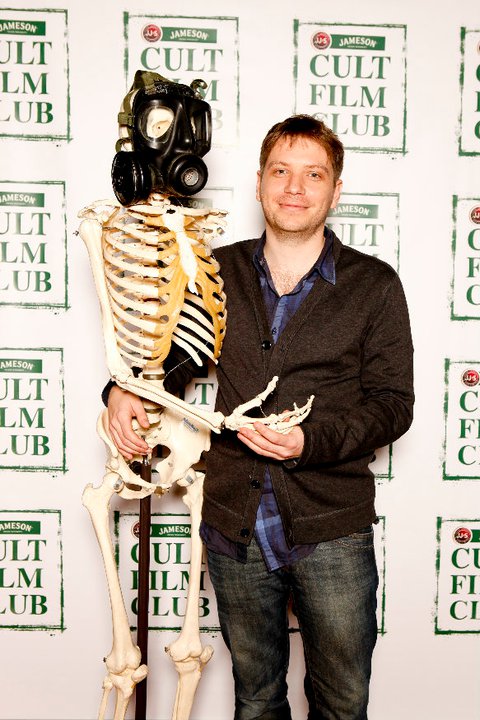 I'll be honest. I have no idea what's going on here.

And then the film finally started, as Gareth very graciously hung out in the bar area chatting to fans. While the low-fi sc-fi may seem like an odd choice for a group-viewing experience, containing a subdued tone rather than bombastic entertainment, few can argue with Jameson's call that it is a future cult film and, in any case, holy CRAP those cocktails were strong.

The mad bastards at Jameson Cult Film Club actually give away tickets to these things for free! All you have to do is sign up to their website, follow the instructions when a new screening is announced and be prepared to queue for a little while on the day. That's it! The fools…
More:  Jameson Cult Film Club  Monsters  Gareth Edwards
Follow us on Twitter @The_Shiznit for more fun features, film reviews and occasional commentary on what the best type of crisps are.
We are using Patreon to cover our hosting fees. So please consider chucking a few digital pennies our way by clicking on this link. Thanks!