Back in 2006, I was working in-house at the sadly now-expired Hotdog magazine in Old Street when I was asked if I wanted to do my first phone interview. The talent? The idiots from Dirty Sanchez. I bottled it. Luckily, some 20 minutes later, I was offered an interview with special effects legend Stan Winston. I didn't bottle it. 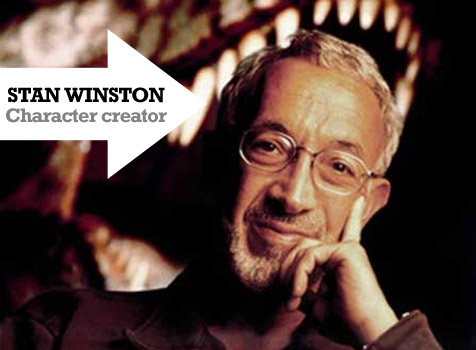 Winston was calling from California to talk about his new book, The Winston Effect: The Art and History of Stan Winston Studio. Naturally, being the world's biggest Jurassic Park fan, I was keen to grill him on all matters pre-historic, but I had a job to do first, and that job was ask him what his five favourite animated characters were.

However, between his answers (King Kong, the monkeys from Planet Of The Apes, the Terminator, the Alien queen and Gollum), I snuck in a few questions on Jurassic Park and animation in general, eager to hear his opinions on the changing face of the industry.

Softly-spoken yet confident and rightly proud of his own contribution to cinema ("I don't think of myself as a special effects guy; I create characters"), Stan made for a great first interview. Naturally I was very sad to hear that he passed away from cancer in June 2008, but I still cherish the day I got to speak to the guy who built the T-Rex and remember just how accommodating he was to this particular movie geek.

Do you think practical effects such as stop-motion can exist in harmony with digital effects?

Stan Winston: Absolutely! When you talk about live stories that involve real human beings, I think that in many ways you don't use physical effects along with digital effects because it's a disservice to the actors. I came out to California to be an actor so I understand actors, and I think the ultimate aspect of what makes a movie work is number one, the story, the screenplay, and then the performances of wonderful actors and the direction.

But any great actor will tell you that 50% of acting is reacting, and actors will let you know that 50% of their performance is based on the actor they're reacting to. You can't expect an actor to give you their best performance if there's nothing to react to. So when you're involving a live performer in the story, I think that it's a disservice to that actor not to have something live there to react to.

It increases their performance, it increases the reality and the visceral feeling of it to the audience, and I think the audience can tell, I think that's why the original Jurassic Park movie worked so well. It's almost as though it was a springboard to what we could do with organic animation, as far as digital animation, it was also a springboard as far as animatronics and robotics, but those dinosaurs were there and the actors had them to react to. They were truly taken by them.

I remember when Laura Dern walked on the set and saw the sick Triceratops, how she really truly felt what she felt and it allowed her to have that feeling. When that Tyrannosaurus Rex, which weighed 25,000 lbs, 12 tonnes of dangerous machine, was smashing into a car, I guarantee those kids – they didn't have to act afraid. The audience can feel that, the audience can tell the difference when something is completely animated, so that's the magic of mixing animation and live action. I think that should never go away.

You've worked with some of the biggest names in the industry throughout your career – Tim Burton and James Cameron for example – but what's it like working with Steven Spielberg?

SW: Wonderful. I would have to say he's the most fun and the most challenging. It's interesting because the most challenging, the most difficult and the most fun experience of my career was the first Jurassic Park. We did things no one could have ever imagined we could do. We created actors that weighed 25,000 lbs that take direction from Steven Spielberg. The T-Rex was a major breakthrough in robotic and animatronic effects, the raptors became memorable characters and the use of CG and live action together, seamlessly, was groundbreaking, absolutely groundbreaking. 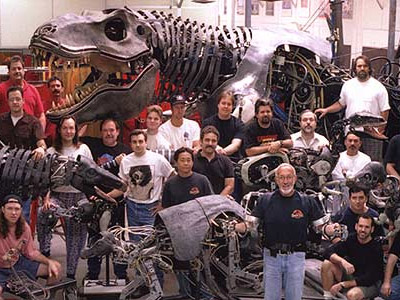 It's still stunning today, and to think it was thirteen years ago [it's now 18 years old]…

SW: It's a combination of the CGI, the live action animatronics and how they worked together seamlessly, and how the actors worked perfectly with them. It's a testament, that is the proper methodology and will always be the best methodology, is if you are able to do it live, do it live. If you can't do it live, use CG if you have live actors in there, because their performance was truly reacting to acting dinosaurs that were there on the set. It raised the bar of CGI, it made the CG dinosaurs look that much better because there were real dinosaurs on the set, lit, and they had to match those dinosaurs in the CG world.

The bar was raised, and to this day, I don't think that anything is more viscerally organic than the original effects in Jurassic Park. At the top of it is the greatest storyteller that filmmaking has ever seen, the person with the greatest range in Steven Spielberg, who I say is the greatest director of all time because of his range.

It was because of him that those dinosaurs had the life that they did and it was because of his vision that he wanted to do as much as he could live. What he couldn't do live was originally going to be stop-motion animation, then it was a breakthrough that came into the digital animation world when Dennis Muren and the brilliant guys at ILM were able to raise the bar and do more than had ever been done in CG with Jurassic Park. 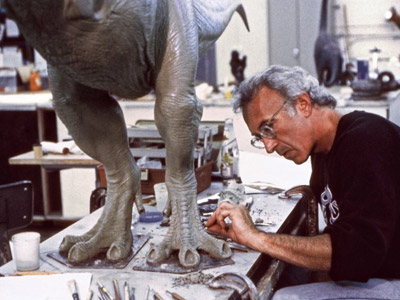 How do you see the future of special effects, with CGI becoming a major factor. Is there still a place for practical effects?

Have you been contacted about Jurassic Park IV?

SW: Not as of yet, I don't know what the situation is.

SW: We're presently working with Jon Favreau on Iron Man in the studio, so busy busy busy. We're working quietly and confidentially with Jim Cameron on his next film.

That would be Avatar?

SW: Quietly and confidentially. [laughs]
The rest, as they say, was history. Cheers, Stan. Thanks for posthumously giving Jurassic Park Week a tiny bit of credibility.

More:  Jurassic Park Week  Jurassic Park  Stan Winston  Interview
Follow us on Twitter @The_Shiznit for more fun features, film reviews and occasional commentary on what the best type of crisps are.
We are using Patreon to cover our hosting fees. So please consider chucking a few digital pennies our way by clicking on this link. Thanks!