My favourite character from Jurassic Park is Ian Malcolm, the 'rogue element' and charismatic doombringer who correctly predicts that opening a theme park based around extinct animals isn't likely to pass health and safety regulations. I originally wrote this ode to Ian Malcolm in 2005, but republish it as part of Jurassic Park Week.


Nerds. Love them or hate them (maybe you are one), the world just doesn't work without them. Nerds come in all shapes and sizes; from the glutinous beasts who spend more time exploring Ironforge and Stormwind than they do the real world, to the skinny, pale-faced bespectacled nerds that can recite Pi to numbers that would make your head spin.

However, every nerd on the face of the planet has something in common - they are all nearly always right. If you're quoting Star Trek, a nerd will put you straight. If you're creating a super-computer, count on the boffin to get the numbers correct. And if you plan to open an amusement park populated by genetically modified dinosaurs created from million year old DNA, you can bet your bottom dollar that the whinging poindexter in your group will be first to voice his objections. 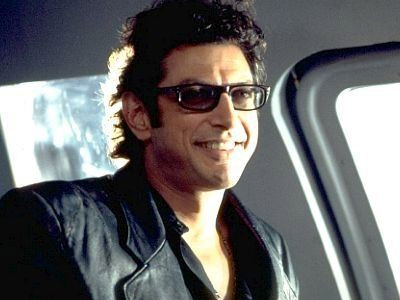 It's a mathematical certainty.


Ian Malcolm is not your average nerd. He dresses well, for starters. He is able to engage females in conversation for several minutes at a time, often establishing physical contact and even producing laughter of the non-nervous kind. At times, he even threatens to be cool, but make no mistake; Malcolm is pure nerd, from his specs down to his loafers.

Brought on to Isla Nublar to endorse John Hammond's prehistoric park, Ian Malcolm brings with him a head for chaos theory and a sardonic wit that quickly begins to grate with the rest of the group. A nerd's work is never done - while experts Dr. Grant and Dr. Sattler pontificate on the moral issues raised and the edible lawyer creams his kecks at the thought of the merchandising rights, only Malcolm cottons on to the fact that building a dinosaur Disneyland might be a little... well, dangerous. "The lack of humility before nature that's being displayed here, uh... staggers me," says an indignant Malcolm. "Your scientists were so preoccupied with whether or not they could, they didn't stop to think if they should!" In other words: if it all goes tits up, don't blame the geek.

And wouldn't you know it, he was right all along. While fellow nerd Nedry was busy being eaten by a Dilophosaurus, the fences were failing all over the park, leaving a few dozen severely pissed off reptiles wandering around the complex, looking to set right 65 million years of evolution and grab lunch in the process. Whoops. There's no finger wagging from Malcolm (just a brief "boy I hate being right all the time"), nothing of the sort. 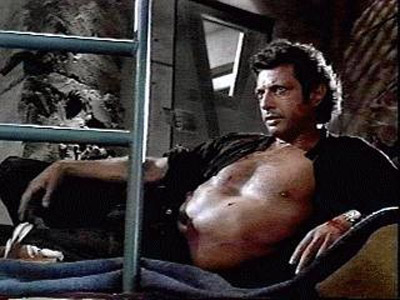 You can afford to be smug when you're this cut.


In fact, he mucks in with the others to make sure those pesky meat-eaters are put safely back behind bars. Another reason why Ian Malcolm is King of the Nerds - he's almost athletic! Granted, he doesn't quite manage to outrun the T-Rex, but he gives it a good go. Can you imagine Sir Robert Winston facing up to a brutal Tyrannosaur? How far do you think Stephen Hawking would get squaring up against nature's greatest predator? You'd still be removing his remains with a toothpick several millennia later. Malcolm survived an assault from the big T and lived to make sarcastic jokes about it.

It must have taken the promise of one hell of a fancy calculator to get Ian Malcolm back on an island full of dinosaurs, but nonetheless a few years down the line he found himself once more being terrorized by terrible lizards, this time on Hammond's Site B. It's here that we find out that Malcolm has a child (which means he's had sex at least once, putting him straight to the top of the nerd Sex Premiership) and even had a dalliance with none other than Julianne Moore - like he says, Ian's always on the lookout for another ex-Mrs. Malcolm.

Has our favourite nerd forgotten his mathematical roots and given up cosine for copulation? Don't bet on it. When Team Dino manage to stick another one past Team Human, Malcolm is on hand to remind them he told them so. "Taking dinosaurs off this island is the worst idea in the long, sad history of bad ideas," he warns. Intentionally returning to a monster-infested hellhole has got to run it a close second, mind. 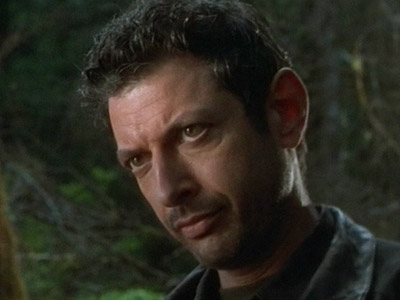 
For too long, nerds were misrepresented in movieland - they needed a hero, and they needed one bad. They'd undergone decades worth of wedgies, wet willies, pink bellies and stinkpalms at the hands of high school jocks, but when Ian Malcolm came on the scene, for a brief moment, mathematics was the new rock and roll and nerds could stroll the corridors with their acne-scarred heads held high.

Posters of Malcolm shared wall space with Xena: Warrior Princess and Buffy, corduroy trousers became fashionable and even popular kids started wearing glasses for no reason - if you wondered where geek chic started, look no farther than the grinning chaos theory expert in the corner. Ian Malcolm has plenty of reasons to be happy. After all, not every nerd gets his own action figure.


Mostly, though, I just love him for that first little laugh he does.

More:  Jurassic Park Week  Jurassic Park  Jeff Goldblum
Follow us on Twitter @The_Shiznit for more fun features, film reviews and occasional commentary on what the best type of crisps are.
We are using Patreon to cover our hosting fees. So please consider chucking a few digital pennies our way by clicking on this link. Thanks!