Actor Liam Neeson, star of exciting action movies like Non-Stop, Unknown and the Taken series, enjoyed a perfectly ordinary flight from London to New York yesterday, with no major incidents reported, much to the disappointment of passengers and staff.


Neeson, who frequently plays badass, ass-kicking danger magnets in his astonishingly successful action movies, took his seat on the Boeing 777 departing from London Heathrow's Terminal 5 without so much as glancing at the passenger manifesto, exchanging prophetic words with flight staff or alluding to any past conflicts he may have had with terrorist groups. The plane landed at New York's JFK airport as scheduled, with no explosions registered, zero hijackings and not a single child reported missing.

Passenger Alan Greenhorn, who sat next to the Non-Stop actor on the commercial flight, was upset that his journey did not live up to the expectations that the presence of Liam Neeson promised. "When I saw Liam Neeson was on my plane, I was all 'Holy fuck, shit is about to go down!'" said Greenhorn, 26. "I watched him for the whole flight, just waiting for the moment he received a text message from an on-board murderer or was informed that a member of his family had been kidnapped by Turkish gangsters. Nothing happened. He just fell asleep watching Madagascar."

"He did get up to go to the bathroom about halfway through the flight, which I thought might lead to a fight in close quarters or the discovery of a suitcase full of drugs," Greenhorn continued. "But I think he was just taking a dump." 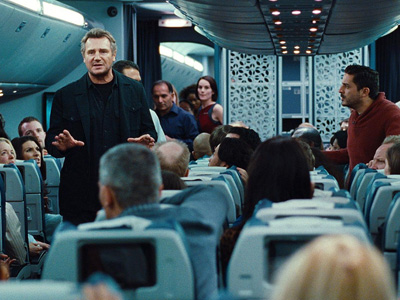 Neeson responds to passenger requests that he "just kill someone already".


Stewardess Cheryl Thompson also expressed her disappointment that Neeson did not once rise from his seat to inform fellow passengers in his Transatlantic brogue to be calm, this was a hostage situation. "The girls and I had such high hopes that Liam would bring some excitement to the flight," she said. "The least we expected was that we'd find him looking for a bomb in the staff quarters, or that he'd tell us he'd lost his memory and was trying to find his wife, who was possibly working with the KGB."

Neeson did request Thompson's attention around 30 minutes into the flight, but only to request a glass of water. "What a letdown," said the stewardess. "He showed no inclination to seduce me in order to gain unlawful entrance to the cockpit, nor did he whisper any coded messages in my ear with instruction to pass it on to his ex-Army buddy Chip at Ground Control. Unbelievable. At least when Arnold Schwarzenegger was on my flight he had to the courtesy to pat me on the ass."

Around three hours into the flight, Neeson showed signs that he might be retrieving a concealed firearm from his carry-on that he'd somehow managed to smuggle through customs, but he was just getting a magazine from his bag.

Captain Torgen Sondgren was also downhearted that Neeson showed no interest in taking the controls to land the plane in the event of his theoretical heart attack. "I was sort of hoping that he might even require the help of the flight crew to make fake announcements over the Tannoy in order to root out any agency spies that were trailing him," said Sondgren. "I'd practised what I was going to say and everything. But nope. Nothing. He didn't even break anyone's neck."

Upon the plane's arrival at New York, Neeson yawned, stretched his arms as if firing guns from both hands, then proceeded to disembark the aircraft at the normal speed, without an urgency that suggested people get out of his damn way, it was gonna blow.

When asked if Neeson enjoyed his flight, the actor told photographers at JFK airport that yes, he did.

More:  Liam Neeson  Non-Stop
Follow us on Twitter @The_Shiznit for more fun features, film reviews and occasional commentary on what the best type of crisps are.
We are using Patreon to cover our hosting fees. So please consider chucking a few digital pennies our way by clicking on this link. Thanks!