Because writing down quick thoughts and opinions about things as they happen is preferable to typing up a well-reasoned and cohesive article the next day.


It's that time of year again where I attempt to stay up all night to watch the Academy Awards (overseas readers should note that the Oscars are aired here in the UK at 1.30am, ending at... wait, does that say 5am? Jesus). This time, however, I will be liveblogging the whole ceremony, as long as I don't get too distracted by OH MY GOD THEY JUST SHOWED BRADLEY COOPER IN THE AUDIENCE.

So here I am, armed with lots of Lucozade, Haribo and my Seth MacFarlane Oscars Bingo scorecard. Come join me for up-to-the-minute reactions and plenty of typos. Also, contact me on Twitter to join the chat and help keep me awake. Please help keep me awake.

This liveblog is now finished. Read from the bottom up if you don't want to be incredibly confused for a few minutes.
05:17 - That's me signing off then. A great night for Academy Award winner. Not so much for Academy Award losers. Already looking forward to seeing The Lone Ranger sweep all the statues at next year's Oscars, to be hosted by Kevin James and David Spade. GOODNIGHT.

05:14 - Thanks to everyone who joined me throughout the night. For those reading this the next day, YOU MISSED OUT ON AN AMAZING NIGHT OF INCREDIBLE THINGS THAT YOU'LL NEVER BE ABLE TO SEE AGAIN. Oh, who am I kidding - there's probably several hundred 'highlights' videos on YouTube already.

05:06 - Well, that's it from me then. Good to see that there was a nice spread of awards across all the films. More importantly, by my calculations, here's where I stand on the Seth MacFarlane Oscars Bingo. Just hover over to see how many I crossed out. I think you'll agree that I won HOUSE or BINGO or a shot of something: 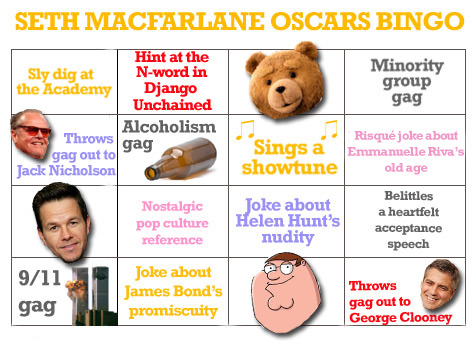 05:00 - Glad to see that my wants from about 12 years ago (at the bottom of the page) came true for the most part. Particularly pleased for the bearded Ben. Can I go to sleep now?

04:58 - Ben Affleck's nervous speech is getting a bit out of control. He seemed a little angry and has just implied that being married to Jennifer Garner is "hard work". Otherwise, very emotional.

04:49 - Daniel Day-Lewis jokes that he was set to play Maggie Thatcher before he and Meryl Streep decided to swap. It got the biggest laugh of the night. Shame on you, Seth.

04:48 - And the Best Actor Oscar goes to... Daniel Day Lewis! Everyone in the audience carries on with their conversation and no one even bothers to look up.

04:45 - Christ. One quick, sweet, teary speech later and we're already on to Meryl Streep to present Best Actor. Where was this pace an hour ago? I could have been asleep ages ago.

04:43 - Jennifer Lawrence! And she immediately trips up the stairs.

04:35 - Ang Lee wins Best Director! Amazing. I love Spielberg but Lee thoroughly deserved this. Both because of the huge technical accomplishments involved, and because he just seems like such a sweet little man, right?

04:28 - Argo wins Best Adapted Screenplay and Django Unchained wins Best Original Screenplay. Tarantino stays until after his play-out music to give what seems like a second speech. Fucking Captain Mouthpiece.

04:25 - You're right, she's from Brixton and West Norwood. Combined, they equal Croydon. That's geography maths for you.

04:17 - There are few things in this life I love more than hearing the heavenly tones of Adele's singing switch suddenly to the coarse cackling of her actual Croydon accent.

04:15 - And the Best Original Song Oscar goes to... SKYYYYFAAAAALL!

04:12 - While Norah Jones sings the song from Ted, it seems like a good time to post this early Photobomb from the Red Carpet: 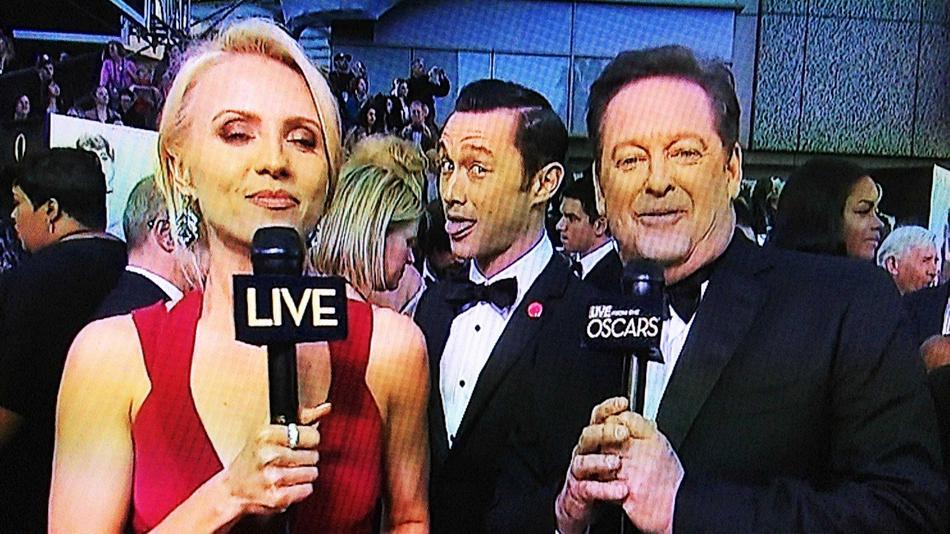 04:11 - Life Of Pi wins Best Original Score! Presented by Richard Gere and Renée Zellweger, who looks like a face drawn on a balloon.

04:08 - Apologies if you think these updates have suddenly slowed down. Barbara Streisand was just on singing Memories, so obviously I was busy trying to chew my own ears off.

03:57 - George Clooney is on to present the dead people montage. Although not mentioned, on the show, we should also remember these people that can no longer be with us:

03:38 - Lovely Adele is lovely though. That was actually a highlight of the show. Even gave Dame Bassey a run for her money.

03:35 - Adele sings SKYYYYYFAAAAAAALLL. Between her dress and the background sparkles, I'm in danger of developing epilepsy.

03:33 - That could be the biggest indicator yet that Argo is going to win Best Picture. Or I guess it could be the voters award it a consolation prize. No, I don't get how the predictors work.

03:32 - Sandra Bullock is here! She makes a joke about crying on screen but tough Oscars audience is tough. But the Achievement in Editing Oscar goes to... Argo!

03:25 - No, of course they wouldn't Jaws out The Hathaway. Instead she walks off shakily to the Godfather theme. Which is... er relevant somehow.

03:22 - And the Best Supporting Actress Oscar goes to... Anne Hathaway!

03:18 - Oscar fact: Katharine Hepburn and Barbara Streisand tied for best actress in 1969. Still doesn't make the very idea any less stupid. These are awards about who is BEST. JOINT BEST also means JOINT LOSER in my book. At least that's what my dad always told me and my brother when we were growing up.

03:16 - There's a tie for the Sound Editing Oscar. A TIE. Seriously. An Oscar goes to each Zero Dark Thirty and Skyfall. Because they were tied. Weird.

03:14 - Back again to see Mark Wahlberg and Ted present another award, after a quick gag about the Jewish. (*sigh*)

03:11 - Back just in time to see Mark Wahlberg and Ted present an award, after a quick Jack Nicholson/sex gag.

02:59 - Chicago followed by Dreamgirls and now... oh shit, it's Les Misérables. This is what's going to finish me off. (*throws the last remaining Tangfastics in his gob*)

02:55 - Catherine Zeta-Jones sings All That Jazz, but her plastic surgery makes it look like Shirley Bassey has come back on stage again.

02:53 - John Travolta introduces a tribute to musicals. His hair looks immaculate, but we all know it's like this underneath: 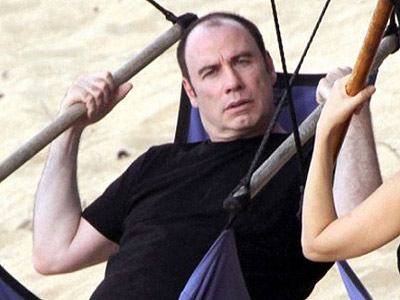 02:50 - Jennifer Garner and Jessica Chastain barely bother with the list of nominees before just throwing the Oscar at Michael Haneke for Amour.

02:45 - Jaws theme rears its head again. It really seems like a distasteful hint to get someone off the stage.

02:43 - Ben Affleck might as well be saying "Here are the nominees for Best Documentary But They Don't Include The Imposter So Really What's The Point?". Searching For Sugar Man wins though. Which is nice but still not The Imposter.

02:41 - SETH MACFARLANE OH NO HE DI'N'T #3: Comparing Ben Affleck to the Kardashians. I dunno. Something about facial hair apparently?

02:37 - Oscars were given to Best Short Film and Best Documentary Short, but I used it as an excuse to give my fingers a break. Don't look at me like that - we're not The Guardian.

02:20 - Les Misérables wins for makeup and hairstyling. more importantly, I have now stuffed my face with three quarters of a packet of Tangfastics and am buzzing off my tits on a huge sugar high.

02:18 - Jacqueline Durran wins for Best Costume Design. When announced, Jennifer Aniston helpfully added - almost as an afterthought - "Anna Karenina", so we all know who really won.

02:13 - Harshness of the Jaws theme was emphasised by a cutaway to Nicole Kidman sticking out her bottom lip in sympathy.

02:11 - Boo! Poor Life Of Pi VFX team just got played off the stage by the Jaws theme. What a cruel and menacing way to go out.

02:07 - And the Cinematography Oscar goes to... Life Of Pi. Think I speak for everyone when I say: 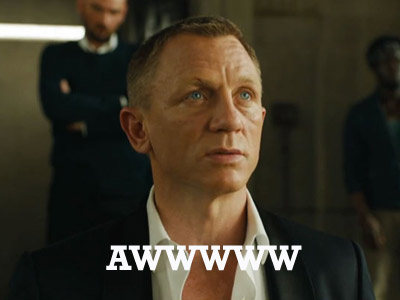 02:02 - Ha ha ha! Reese Witherspoon puts focus on Beasts Of The Southern Wild, only to be followed by a look at three of the films. Confusion ensues and nearly breaks Twitter.

01:59 - And Brave takes home Best Animation! As if there was any doubt. And now there's a kilt on stage, laying the way for Sean Connery's appearance during the Bond tribute (I hope).

01:57 - Paul Rudd and Melissa McCarthy presenting should have been highlight. Not sure what happened there... Good to see Paperman win for Animated Short Film though - a great sci-fi flick about paper that COMES TO LIFE and wreaks havoc on the city.

01:53 - Waltz congratulates Tarantino on "slaying a dragon". Pretty sure this is Hollywood slang for killing a prostitute.

01:41 - Still not sure about the Captain Kirk cutaway skit though. MacFarlane has turned this into an episode of Family Guy within nine minutes of hosting.

01:32 - SETH MACFARLANE OH NO HE DI'N'T #1: Academy dig at snubbing Affleck! And that's one mark on the Seth MacFarlane Oscars Bingo scorecard. 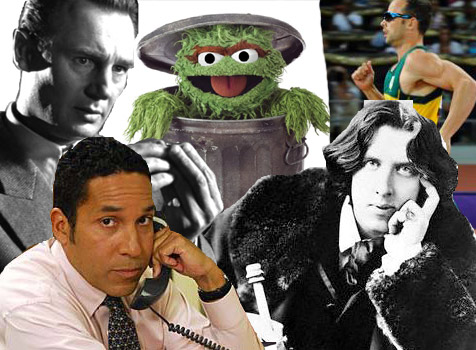 01:09 - I've now watched so much Red Carpet coverage that I feel obliged to tell you all I am wearing 'Giorgio' (that's what I call my dressing gown).

01:03 - Half an hour to go before the ceremony starts and I'm breaking into my Emergency Staying Awake Survival Kit early: 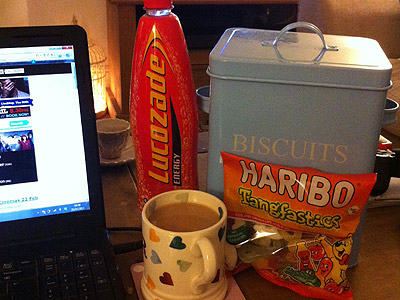 00:53 - Keep seeing an advert for Lincoln in which Empire Magazine is quoted as calling it "landmark filmmaking". Can't help but wonder if the marketing people have just twisted these words from the original "filmed landmarks".

00.33 - But enough about me - what are your predictions, guys? Tell me on Twitter or in the comments. Let's make this a dialogue. Otherwise, come 5am, I'll be a sleep-deprived schizophrenic.

00:32 - Overall though, I'd just be happy if there's a nice spread across all the films rather than one film sweep them.

00:31 - I would LIKE Ang Lee to win Best Director for Life Of Pi but I think Spielberg will get it... and Best Picture? I'm rooting for Argo. But it will probably go to Lincoln.

00:24 - Seeing as we still have an hour to waste before the ceremony starts, let's talk predictions/wants. I would LIKE Joaquin Phoenix to win Best Actor but it will no doubt go to DDL (that's how he's known on the streets).

00:13 - My Red Carpet viewing has changed from Sky Movies to E! - the main difference being that I've swapped Alex Zane for something called a 'manicam'. 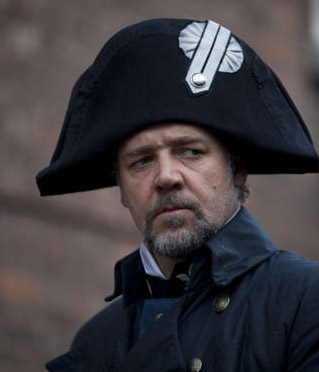 23:47 - Breaking: Steven Spielberg thinks Lincoln is "one of his best movies". Obviously, the others are Jurassic Park and The Lost World: Jurassic Park.

23:41 - So this is obviously going to take a while. While we wait, please allow me the opportunity to vent a little at this promo ad for the Oscars starring Seth MacFarlane:

MARTINIS ARE STIRRED ALL THE TIME, MACFARLANE YOU IMBECILE.

23:34 - And we're off! This liveblog of the 85th Annual Academy Awards kicks off in spectacular fashion with... Alex Zane talking to Colin Salmon. He was in Strictly Come Dancing. And a Bond film several years ago.

More:  Oscars  Academy Awards  Liveblog
Follow us on Twitter @The_Shiznit for more fun features, film reviews and occasional commentary on what the best type of crisps are.
We are using Patreon to cover our hosting fees. So please consider chucking a few digital pennies our way by clicking on this link. Thanks!