"This place reeks of failure," says the realtor trying to sell Don's empty penthouse apartment. Finally, a way in which Don Draper and I share a similarity: I'd live happily enough in a flat with only garden furniture and a TV too. I'd use only paper plates and just throw them over the balcony when I'd finished eating.


It struck me for the first time during The Forecast that Mad Men is probably not building towards any great climax. It looks to me like it's just going to stop. The pace of this episode suggests it, but moreover there's the fact that, four episodes to go, you'd need to be establishing now what the big thing is that's going to end it. Like news reports warning of a meteor shower, or a group invitation to Sally's father-and-daughter dance contest, which is scheduled at the exact same time Don is planning to have meaningless sex across town, or an ominous blood-penned letter from the Manson family.

No, it's just going to stop, isn't it? Just stop happening. And quite right: it's an ensemble piece with a lot of characters who've grown, or not, in very different ways, and you couldn't hope to round off all their arcs in a fully satisfactory way. Well, you could, but you'd have to be really good at writing and running TV shows. There might be an end in sight for a couple of characters, but everyone else is just going to keep mooching around until we stop looking at them. 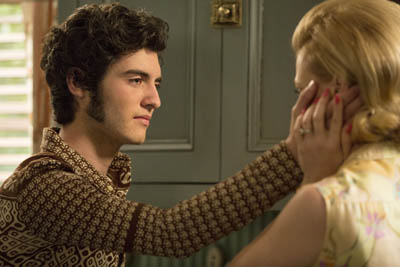 
Joan, at least, might end up mooching on happily enough, having met ageing lothario Richard (aka Roger Lite) in California. Glen shows up and announces he's off to Vietnam, then attempts to get off with Betty, who's tempted but hasn't seen him since he was a weird, stalkery 11-year-old. Sally notices the looks the two exchange. Her parents are the worst.

Now he didn't look like much when he first started at Sterling-Cooper back in season ... I want to say six? But Mathis, whatever his first name is, might have just cracked the whole thing wide open. He's reached the Mad Men killscreen, jumped all the barrels Big Bert Cooper was bowling at him, and collected all the 7,000 hidden bonus cigarettes. Two weeks ago he set Peggy up with his brother-in-law, and she nearly went to Paris with him on a whim. Realising she didn't want to in the cold light of day, however, she seemed to arrive at an understanding about herself, and maybe find a little peace. No: she isn't the sort of person who acts impulsively, and there's nothing wrong with that. Ka-POW: Mathis earns FLAWLESS VICTORY.

This week, he does the same to Don, leading him to a similar self-awareness. Mathis dropped an F-bomb in a client meeting (so we're told; it happened off-screen, possibly because Sally met AMC's one-"fuck"-per-episode quota earlier on) and now he's in trouble. He goes to Don for advice on how to untorpedo his career, which is pretty funny in itself. Don tells him about the joke he made to Lucky Strike at the next meeting after he'd offended them: a smart-ass crack about how they'd embarrassed themselves. Mathis, being an imbecile, goes in and says the same thing verbatim to the peanut-butter cookie people, as if being Don Draper is just about saying the same words. 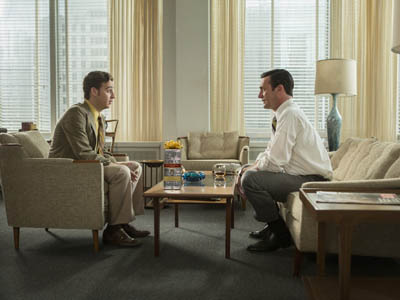 "Sure. Put your balls on the Danish platter. They'll love it."


Inevitably, it goes down like an arse-butter cookie, and Don tells him he should've come up with his own thing. It didn't work because Mathis doesn't have any character. And Mathis shouts back: "You don't have any character! You're just handsome! Stop kidding yourself!" And he might be fired, but by Miss Blankenship's ghost, he's won Mad Men. Don is laid bare. Once he was a genius, now he's just a slick businessman the clients love. He signs off on creative but he doesn't do any of it. And this is probably all Mathis has seen of Don: he missed the golden years of his creativity, and in truth they're a bit of a dim memory for us, too.

With this ringing in his ears, later Don chivalrously passes up an opportunity to nonce up one of Sally's 17-year-old friends, which was totally fine in the seventies, but he notes that the girl is impressed he has a penthouse. Then he gets home to find he's sold it. So now he's not even handsome. What's left?