Sometimes Mad Men makes me doubt my own intellect, something that usually happens only when I wake up and survey the remnants of a wholly unnecessary Dallas Chicken meal bought drunkenly the night before. But there lives an intellectual joust within the self on watching high-quality, subtext-laden TV. Am I getting it "right"? If I type my interpretations into Google, will I find others think the same, thereby validating me? Or if I announce them in public will I be scorned by my peers for missing the allegory? Well, this time I'm going for broke. "Lost Horizon" is all about God.


As with all the best theories, I've based this on a single observation of something that is possibly not even intentional and in any case open to wild misinterpretation, then used confirmation bias to make everything else fit.

But look: this is a cross, right? 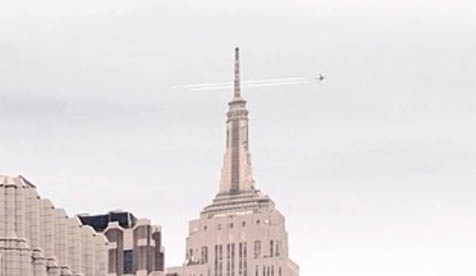 Some background: the Sterling-Coopertons are now enveloped by McCann Erickson, and no one except Ted is really satisfied with it. Joan is realising she's never going to escape being constantly sexualised by every man she works with. Peggy is relegated again, having been presumed a secretary and overlooked for a new office at McCann, forced to hang around in the empty Sterling Cooper floors at the Time & Life until one is sorted out. Later, after sacking off the day and getting drunk with Roger, she shows up hungover, smoking a fag and wearing sunglasses. This, it should be obvious enough, is exactly what Don would've done.

In Don's new office, he hears a breeze coming from the closed window and tests it with a little push, hinting at the final fall the opening credits have always foreshadowed. (A metaphor rather than the likely literal ending, you'd think.) 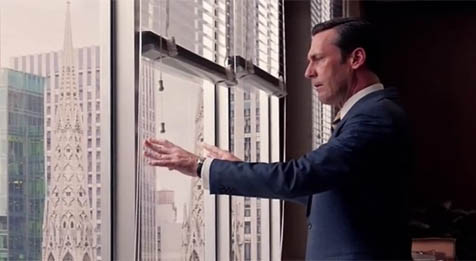 Later he goes to a Miller beer meeting and is surprised to be sharing it with around 15 other creative directors. Yes, there are other creative directors. A guy called Bill Phillips starts to talk about who the Miller customer is, painting a picture in the mind and winning over the room like Don used to. Don stops listening, looks out the window and spots the plane in the sky.

The cross is probably not significant to him, but the plane reminds him of what he thought he'd secured with his Sterling Cooper West idea: California. The place to which he could always escape his sham life to stay with Anna Draper, who knew he was Dick Whitman, and was the only woman with whom he could enjoy a genuine platonic friendship. (Remember how he was always a better, more magnanimous person when in Los Angeles, even seeming almost to enjoy Pete's and Harry's company.) He gets up and leaves. Ted, who understands Don better than most, gives an unsurprised shake of the head. 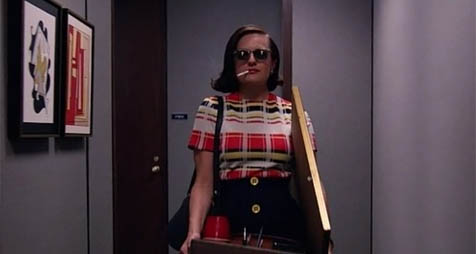 Don drives to Racine, Wisconsin, trying to track down Diana Bauer, the waitress. Diana is Don, essentially: a runaway, using New York like a cloak to disguise herself. He's already committed the ultimate act of narcissism by having sex with himself, but now she's disappeared and he has to find her, just as he has to find himself. When he gets there he inveigles his way into her ex-husband's house by conning his new wife (one of the out-and-out creepiest things Don's ever done). Bauer, though, sees through him straight away and chases him out. "You think you're the first one that came looking for her?" he asks. "She's a tornado. Just leaving a trail of broken bodies behind her." Sound like anyone we know?

"She seems so lost," Don tells him.

Don isn't looking for Jesus; in fact he's doing the opposite, trying to effect his own salvation. But Bauer's insistence that more have come looking suggests a parade of lost souls, not looking for her but for themselves. Ironically, there are plenty more out there like Don (both with his good and his bad qualities, as Bill Phillips's earlier boardroom grandstanding shows), though he's more alone than ever.

And with "Space Oddity" on the radio, off he heads in his chrome Cadillac ("Here am I sitting in a tin can..."), going God knows where. He stops to pick up a hitchhiker heading for St Paul (nearby Minnesota's state capital, but also maybe a hint at a Damascene moment). Now it's time to leave the capsule if you dare...