Betty Francis took a lot of shit down the years, from her husbands, from her daughter and from Mad Men viewers insistent on judging her by contemporary standards of parenting and womanhood. Maybe she's due a reappraisal.


From the first episode, lung cancer was a pretty good bet for a main character's final arc. The smoking in Mad Men was always about a bit more than just emphasising the period; it's tied in with a bunch of people thinking themselves sophisticated, aspirational (note how Peggy smoked a whole lot more the higher she climbed the Sterling-Cooper pole, which is also about her having to adopt masculine traits to do so). If Mad Men's about one thing, as I have astutely observed and definitely didn't hear Matthew Weiner say on the Nerdist podcast, it's people wanting the life they see in the adverts but having to deal with the fact that it doesn't exist. Betty was a model then a mother and a lady that lunches, and smoked her face off through it all, looking like the epitome of the elegant woman in the cigarette commercial.

On top of her diagnosis, there's another reminder of the hand she was dealt by a patriarchal society. The doctor is insistent she get her husband to come to the hospital before he'll tell her anything, then at a later consultation another physician talks directly to Henry about how the cancer has spread, ignoring Betty while she sits staring at the X-ray. Henry, a worse husband even than Don in some ways, thinks it's his role to own the experience for her and take over, organising treatment, telling Sally about it against Betty's wishes, and never asking how she feels. 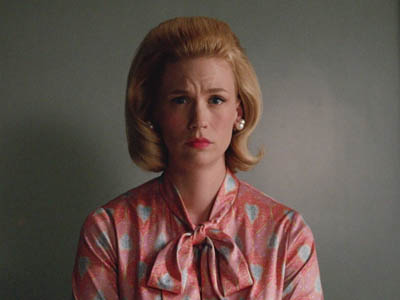 This is all pretty shocking because we've spent most of our time at the office in later seasons, where women like Peggy and Joan are growing more and more to be accepted as equals. But in recent weeks we've had reminders that those two aren't as far ahead as they thought either; Joan has had to take a reduced buyout on realising she can't work at McCann without accepting sexual harassment, and Peggy was mistaken for a secretary in the office move. Betty's bubble was always a separate one: as a woman who married rather than worked, she's stood on the sidelines while feminism began to happen, watching women like Megan start to control their own destinies.

It's a life she chose - especially after divorcing Don, when she could've branched out a little rather than remarrying straight away to a man of the breeding she was shocked to discover Don didn't have - but remember she never felt other options were available. Marrying well was all she was brought up to do. There is at least some pleasure for her that Sally won't do the same; she tells her in a post-mortem letter: "You marched to the beat of your own drum. Now I know that's good. I know your life will be an adventure." Betty continues her studies in psychology, the only slice of self-determinism she's had in years.

The Milk and Honey Route: A Handbook for Hobos was a 1930 guide to transient living, and the episode title recalls "The Hobo Code" from season 1, in which a young Dick Whitman encountered a drifter who had left his family in New York for the freedom of the road. Maybe with this on his mind, Don is in Oklahoma. Having gone looking for himself in Diana, maybe he's found himself in Andy, a small-town hustler kid working at his motel. This follows a dream in which he's pulled over by a faceless state trooper, who tells him: "You knew we'd catch up with you eventually."

Don reluctantly goes to a veterans' fundraising evening, where everyone gets drunk on Lone Star (Rust Cohle's beer of choice in True Detective, you might remember, not that it's relevant) and tells war stories. Don's service record isn't without its blemishes, of course, if you're the sort of stickler who gets hung up on details like accidentally killing your commanding officer then stealing his identity. On meeting another Korea vet, Jerry (played by Roy from The Office), he's nervous to show his face, but it turns out they weren't in country at the same time, to his relief. 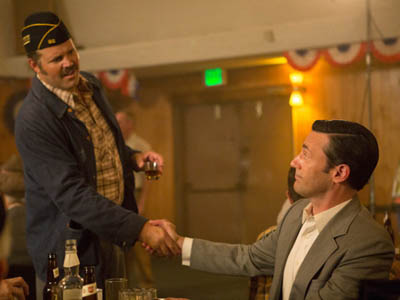 Floyd, a World War Two vet, tells with regret how he killed four defenceless, starving Germans in a Belgian forest. "You just do what you have to do to come home," says Del, the motel owner. But when he stole the original Don Draper's tags, Don did what he had to do so he wouldn't have to go home, and the contrast isn't lost on him. He tells them he killed his CO by accident, but omits the worst part.

Andy has stolen the donation money from the event, and the vets later jump Don in his bed, thinking it was him, and taking his car till he comes up with the cash. When Don catches up with Andy he tells him: "This is a big crime, stealing these people's money. If you keep it, you'll have to become somebody else. And it's not what you think it is. You cannot get off on that foot in this life." He's found himself, finally, and maybe he can put right what he did wrong in Korea. The money returned, he drives Andy to the bus stop so the kid can leave town for good. Once there, he gives him his Cadillac, and sends him off to have the life he couldn't. Sitting down to wait for the bus he smiles, completely alone, with no possessions, now truly on the milk and honey route.

Buddy Holly's "Everyday" plays over the credits, the first non-contemporary song (it was released in 1957) I can think of to do so, hinting at some extra significance. A crash to come, after the launch and mechanical failure of last week's "Space Oddity"? Or just to remind us that, every day, the end is a-getting closer?