The sixties are over, man. It's April 1970 and the Beatles are officially splitting up. Nixon is directing US troops to invade Cambodia. At the Kennedy Space Center the ground crew of the Apollo 13 are attempting to bring Tom Hanks, Kevin Bacon and Bill Paxton safely back from space. Oh, and Don Draper's banging a diner waitress in an alley.


As decades go, that was a pretty big deal. Don is externally unchanged, save for a blue shirt - a BLUE SHIRT - at the office. Inside, as always, he's a mess. There is no more Megan and, in an organisational masterstroke, he has outsourced administration of his sexual conquests to a telephone answering service. He'll have to wait ten years before the Filofax further revolutionises the timetable of the casual misogynist, but for now he's outdone himself.

What an absolute ledge. Or perhaps it's being suggested to the viewer that reacting to your second divorce by shagging your way through half of midtown Manhattan is in some way unfulfilling and symptomatic of a malaise. He's living the high life, his status once again unchallenged at the agency, and an anecdote from his days as Dick Whitman, once the secret he knew could bring him down, can now be tossed out to Roger and a table of party girls.

But Don is crippled inside; incapable of happiness. Back home, he turns on the light to his empty apartment then immediately flicks it off again, not wanting to look at the reminder of his loneliness. He dreams he saw Rachel Menken, then discovers she just died, which leads him to the waitress, who maybe also reminds him of her. The sex they have, it turns out, is merely what she presumed was expected by the $100 tip left earlier. Whether he's seeking it or not, Don finds meaning in nothing. 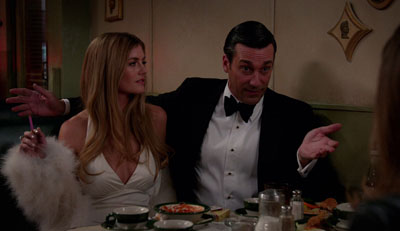 "So my old man gets kicked to death by a donkey, I steal a guy's identity and set about poisoning everything I ever loved! Still, got to laugh, haven't you?"


Meanwhile it turns out after seven seasons that your Madison Avenue types are quite sexist, as Peggy and Joan discover in a meeting with some male representatives of their new paymasters McCann Erickson. It's obvious they've just palmed off some office juniors on them, and the three men snigger like idiots throughout the meeting, cracking jokes about Joan's bra. It's funny that this scene feels a little one-dimensional considering the usual high bar, but then you realise that the casual sexism is so matter-of-fact throughout the whole series that it's necessary in order to flag up when it's particularly egregious.

In the lift the two women argue: Peggy points out how rich Joan now is, and suggests that she made her bed; now she'll have to lie in it. Probably on her back, just out of necessity. Peggy likely knows how she got there too.

The relationship between these two in later seasons has been one of my favourite things about Mad Men. Joan resented the shit out of Peggy to begin with because she was a typist made good, and the secretaries were the only people Joan had power over. Later on they formed an entente cordiale when they realised they were the only two women at Sterling-Cooper who were shooting for anything and they had a shared experience. Peggy rocked up in Joan's office for advice and a smoke in season five when she thought Abe was about to propose, precisely because Joan was the only woman around who'd give her any sort of sensible answer. 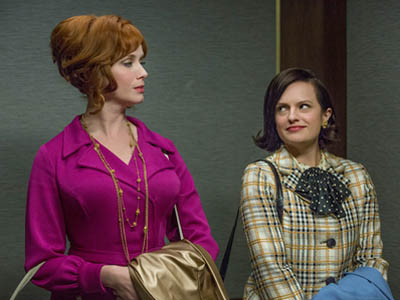 
Literally everyone else has moustaches, giving the SC office a fittingly seedy air as it heads into the seventies. It is a well-known fact that, on 1 January 1970, everything previously thought forward-thinking and revolutionary immediately became seedy and disreputable. All soft drug use hitherto pursued as a means to spiritual enlightenment gave way to cold, vein-ravaging heroin addiction. Everyone engaging in free love in the spirit of sexual liberation was now just having meaningless, exploitative, AIDS-raddled sex, possibly with Meat Loaf. And Jimmy Savile's habitual squiring of underage girls, previously explained away with a wink by means of "Yeah, Jimmy's a bit of a one", was now at least a little creepy, though still widely tolerated in his workplace. Through moustaches Mad Men, as ever, reflects the mood of the age, though an appearance by Savile as a character, played by Jake Busey, remains a slim prospect.

Ken Cosgrove is out on his ear, and Pete lacks even the most basic self-awareness in complaining that he might have to buy an apartment building to offset some of his vast reserves of cash. By the end of the month, Ringo Starr's first solo album will be released. There is no going back.