Megan's diary entry: "Got a million dollars off Don. Didn't have to have sex with Harry Crane. Best day of life so far by some stretch. Megan pour la victoire."


Don has a million dollars to pay off his wife? I know they sold out to McCann Erickson and everything, but a million dollars going spare? You'd think he'd be a bit perkier in general. As Hollywood has always made clear, money buys you happiness.

Roger's LSD period aside, none of these people really experienced the swinging sixties in the way you and I think of it: tuning in, turning on, dropping out, thinking The Doors were a good band. The counterculture turned up on their doorstep now and then, via the odd beatnik or Hare Krishna wandering in off the street, but on the whole they were all at work for ten years like everyone else. 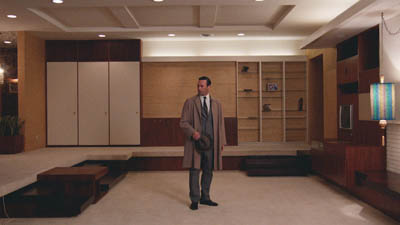 "Well, at least she left me the ashtrays." (*lights six fags*)


Really what they've done is to turn ideas into money, in the decade when that first became a realistic prospect. If you wanted to make a million before the sixties, you had to make something; bolt a load of concrete and steel together and say Here, this thing'll get you across the river without your brogues getting soggy. Now you could take a nasal spray manufacturer out for cocktails and sell him on a few drawings a guy with a beard had done to make him look good. You could be an artist and a piss-artist, and end up a prince around Manhattan. Now everyone's got rich off the sixties, except those who strayed from the path and wanted to embrace the alternative lifestyles they offered. Like Kinsey, the dick.

Don, as ever, spends the episode needing women but underestimating them. He smiles politely when Betty tells him she's going to study psychology. Though in fairness, Mad Men has never made clear whether Betty is to be underestimated or not: the obvious narrative would've been that she had hidden depths which Don ignored, but the drop-off in screen time for the character from season five onwards is because she hasn't, really. Not that it's her fault: she was brought up to think that being pretty and marrying well were all that mattered, and focused on that to the exclusion of all else. She's a cipher more than anything: the anti-Peggy.

He seeks out Diane, the waitress from last week, possibly because he senses she's broken like he is. Uncharacteristically, he wants her to stay with him overnight, and out comes her secret: one of her kids died and she abandoned the other to come to New York, the loneliest place on earth. ("I always wanted to live here," says Don, which tells us a lot.) 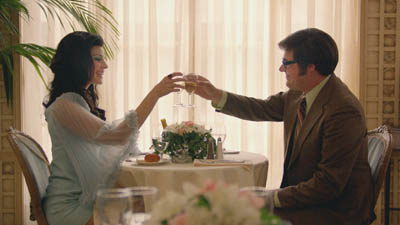 "My plan for hot sex with the boss's ex-wife is so foolproof, I only wish I'd thought of it sooner."


Megan never truly interested Don because she's basically happy, but it's a happiness he both envies and cares about. He gives her the divorce settlement not to be rid of the stress of dealing with her, but because he feels like he's stolen part of her youth. Her mother Marie seems to agree, but in reality I wonder how much Don has wronged Megan. Sure, he cheated on her, but she never knew about it, so that's ... OK? His greatest crime was to imagine he could move his secretary into his home for sex on tap and coq au vin, and expect her not to blossom into an independent spirit. I don't know if he deserved to lose his furniture, but he probably thinks so. He won't replace it, you'll see, and next week will just be an hour of him wanking and crying in an empty apartment, and eating Life cereal using a mortar and pestle.

And a word on Harry: I felt sure the character was on his way out years ago, when they culled Kinsey, but I love what they've done with him. He's ridden the Sterling Cooper gravy train from here to Los Angeles, and carved out his own niche. It's hilarious how much everyone hates him, especially Don (the little look he gets when he says "Not for me" despite not being offered a drink had me in stitches), and how little Don considers it a threat when Harry forewarns him about his lunch with Megan. Offering her career advancement in return for sex is the lowest he's ever sunk, but hey: it's the seventies. Madison Avenue made itself a plutocracy, and sleaze is where we live now.