"Just seen Captain America: Civil War. Need to revise my MCU rankings!!" a man promised his legions of Facebook friends this weekend and now the Internet has halted to a standstill awaiting what will surely be the definitive list of Marvel Cinematic Universe films, ordered by quality.


While the world remains on tenterhooks for the man's next status post, speculation has been rife as to where Civil War will fall on his list. Thanks to an earlier post saying "Off to see civil War 2moro - so ecxited!" we know that the man was expecting to like the film, and a further tweet 22 hours later reading: "LOVED #Civilwar!!! Spider Man is the nuts lol" has led to bookies offering a mere 2/1 odds on the film featuring in the man's top five.

But exactly where is still anybody's guess. A deeper analysis would suggest at least a top three placement as the film features Black Widow, in whom the man has previously expressed interest on numerous occasions, as well as the character of Vision, who the man once described publicly as "a cool robot". Both of these characters have only appeared together in Avengers: Age Of Ultron, which currently sits at the top of the man's list, based on "awesome fighting" and "the best Iron Man suit EVER".

And yet some fans are pointing to clues that Civil War may not be ranked so highly after all, stating that absence of the Hulk is sure to hurt the film's chances of being deemed the all-important 'best MCU film so far'.

Further uncertainty has arisen after a previous tweet from February of this year was uncovered in which the man said "i dont get why r iron man and captin America r fightin lol #TeamIron". 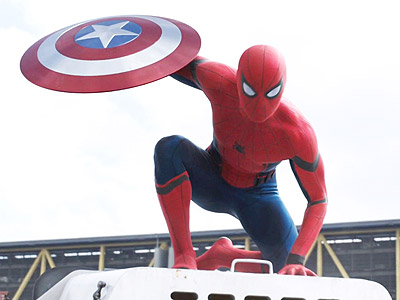 New character Captain Spider-Mamerica could be a deciding factor.


Either way, while many are expecting the man's list to finally supply the only and correct answer as to how the films compare with each other, his rankings have not been without controversy in the past.

Back in November 2013, following a trip to the cinema to see Thor: The Dark World two weeks after release ("to avoid the crowds"), the man published his very first list of MCU rankings, but it took an eagle-eyed Facebook friend to point out that Ang Lee's Hulk, which featured 6th on the list, wasn't officially part of the Marvel Cinematic Universe. The Facebook post was quickly edited and the man has never publicly commented on the wrongful inclusion since.

Following this incident, back in April 2014, the man's then-current list featured the newly released Captain America: The Winter Soldier in the coveted number 1 spot, but when he was asked to show his workings, he could only produce a beer-stained pub coaster with the list scribbled on in biro.

This story will be updated as more news arrives.

More:  Captain America Civil War  Marvel  Iron Man  Spider-Man
Follow us on Twitter @The_Shiznit for more fun features, film reviews and occasional commentary on what the best type of crisps are.
We are using Patreon to cover our hosting fees. So please consider chucking a few digital pennies our way by clicking on this link. Thanks!