More Sony franchises that need Iron Man to rescue them

Critics can't fawn over Spider-Man: Homecoming enough: hooray for a competent Spider-Man movie! There's no doubt that Marvel have to take some of the credit for Homecoming's success - Kevin Feige was parachuted into Sony HQ to save the franchise, and he did so by basically letting them have a go on Iron Man for a bit. Is it really that simple? Does adding Iron Man always improve a franchise? Sony aren't waiting around to find out: they've already green-lit the following new sequels to their existing franchises. Now to contact Robert Downey Jr and assume he's available!

There's been a corporate takeover at a Grey Industries or whatever! Christian Grey is out and Tony Stark is in, and although he's been known to enjoy a bit of kink himself (Pepper Potts knows too much), he favours quipping over whipping. The climax of the movie - fnar - sees Anastasia convince Tony to ravish her while he's wearing his Mark 42 exo-suit, only for a spank to turn nasty when Iron Man's palm repulsor beam is accidentally engaged. Stark escapes the subsequent lawsuit when it's revealed he was operating the suit remotely the whole time. The devil. Ladies will still love him!
James Bond in... The Iron Man With The Golden Gun

Uh oh. Bond is getting a little fusty. Looks like Britain's top secret agent needs a brash US partner to buddy up with on his missions! This has never failed in the history of cinema! 007 finds himself sharing field work with S.H.I.E.L.D.'s Agent Stark but finds himself rather surplus to requirements, given that his skill set - shagging, firing a gun and making sarcastic remarks to no one in particular - is no longer unique. When faced with the intergalactic threat of space tyrant Thanos, James Bond shits himself and hides in his coat cupboard for a week. Strike up another victory for Iron Man!
Ghostbusters: Iron Man Is In This

Women didn't work. What about men? Not just any men... Iron men! Iron Man! Iron Man is in this! Feige reluctantly accepts another suitcase of Sony cash and instigates the RDJ Protocol: Downey Jr is on set in minutes and fanboy reaction on the internet's bro quadrant is instantly improved. As part of the Iron Man deal, 50% of all ghosts busted in the movie must be the spirits of dead characters in the Marvel MCU, including Quicksilver, the former king of Wakanda and, in an emotional finale, Howard Stark. Sounds heavy, but don't forget the fun theme song: Who you gonna call? HULK-BUSTER! (Hulk does not appear in this movie).
Iron Men In Black

It's just like a normal Iron Man movie... But he's got a black suit!
The Stark Tower

Without a jet-propelled IronMantervention, Roland the Gunslinger isn't getting past the first floor of Stephen King's seven-book series. This 'Dark Tower' in the story. What if it was... Avengers Tower? And instead of the film being really dark and bleak and obsessed with death, they could add more jokes? And everybody's favourite genius billionaire playboy philanthropist? Tony Stark could make at least three jokes about the Horn Of Eld and that's just off the top of my head.
Ju-Iron-Man-ji: Welcome To The Jungle, Iron Man

Remember, this time Jumanji is a videogame, so anything goes! Time was, adding The Rock to your movie was considered 'franchise viagra', but even Dwayne Johnson can't stay hard all by himself - enter Tony Stark to take control with a firm hand. No matter the story, the end game here is to have Dwayne Johnson wearing an Iron Man suit. I don't care how that happens. Just make it happen. Here: The Rock rolls a double-six. He gets to wear the suit. There. I can be a screenwriter.
Resident Evil featuring Iron Man

You know who would be the perfect hero to help out the characters to fight zombies? You know what I'm thinking! Spider-Man! Peter Parker could use his web shooters and newfound agility to outmanoeuvre the zombie hordes, and- wait, no, even better, make it Iron Man! Yeah!
In exchange for these franchise crossovers, Marvel can use any of the following Sony characters in their Cinematic Universe. 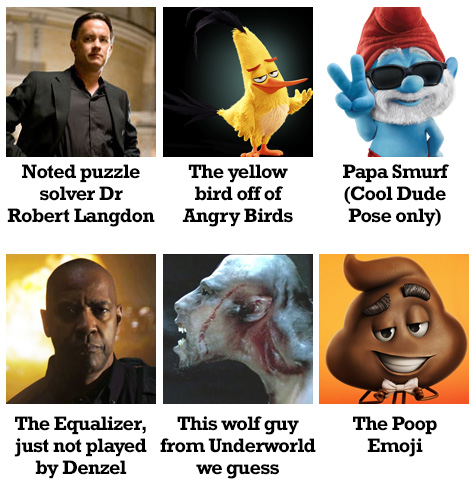 This seems fair. I'm pumped, with synergy! When I say 'Cinematic', you say 'Universe' - CINEMATIC!... CINEMATIC!...

More:  Sony  Marvel  Spider-Man  Spider-Man Homecoming  Iron Man  Robert Downey Jr
Follow us on Twitter @The_Shiznit for more fun features, film reviews and occasional commentary on what the best type of crisps are.
We are using Patreon to cover our hosting fees. So please consider chucking a few digital pennies our way by clicking on this link. Thanks!