It's been about nine months since I last saw an episode of Mr Robot, and now I remember I rarely have a bloody clue what's going on. Is he his own dad? Is his dog real? Why would there be a fully-functioning popcorn machine still in an abandoned amusement arcade? Oh God there are 12 of these things.


So there was a revolution, right. A proper Fight Club one where the banks lost all their records, just as Elliot discovered that in fact Christian Slater didn't exist and he was Mr Robot. Hacktivism is brilliant in screen fiction: always carried out by enigmatic wiseacres who reject social norms (autistic misanthropy for the men; smoky eyeshadow, laddered tights and a fuck-you attitude for the women, though not at the expense of sexiness, of course). Here it is at least depicted through a view of computers that doesn't let you off the hook, all command-line prompts and indecipherable code, no big flashing buttons that beep and say "DOWNLOAD OF ALL NSA RECORDS COMPLETED".

Mr Robot is a rare beast for American TV, in that it actually uses a mainstream platform to question whether capitalism is something outside of which society can function. No accepted American ideology seriously entertains this notion; even Bernie Sanders, thought of as a loony socialist over there, would've only just about found a home in Ed Miliband's slightly-left-of-centre Labour party in the UK. Momentum would call him a Blairite shill.

You don't get American equivalents of Jeremy Corbyn and John McDonnell; they'd be locked up in asylums. Here, in troubled times, the proposition gets serious consideration from thousands of well-meaning middle-class ideologues without the first clue just how catastrophically extreme undiluted socialism is, and the Conservative party steamrollers them while they fight among themselves about Israel. Corbyn probably loves Mr Robot, but covers his eyes and ears and thinks about Cuba whenever a scene like this episode's "woman in the bank" one comes on. 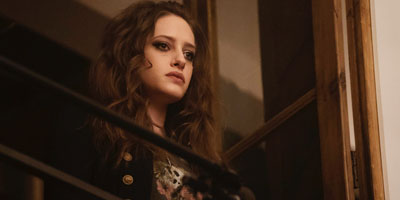 Darlene, realising she was supposed to be hacking and bringing down society but got distracted by Buzzfeed's "27 Things You'll Know if you Grew Up in the Nineties" listicle.


The redistribution of wealth at which fsociety were tin-headedly aiming has caused chaos as we open season two. Obama's on the telly doing speeches about the day they're calling "Five/Nine": a neat trick shows him mention fsociety by name, or maybe they actually got him to do it for real. He's pretty easy to get in a TV studio as he winds down. Elliot has sequestered himself in his mum's house because "she's the most strict person I know" and he wants order and routine to stave off his hallucinations of Christian Slater. (He wanted to hallucinate Jack Nicholson but it was too expensive.)

He eats every meal with a guy called Leon who, entertainingly, has just discovered Seinfeld and won't stop going on about it. On its bottle episodes, he asks: "Where's the story? That just makes no sense." That Seinfeld is famously about nothing is, you'd guess, significant, something Leon makes mention of. It's perfect for Elliot: normality with no responsibility to talk. "I tell you, the human condition is a straight-up tragedy, cuz," says Leon.

Elliot's still doing his therapy, as we find out after ten minutes or so when it's revealed his voice-over has been from a session. When he clicks back into his usual direct-to-audience VO, he says he still hasn't forgotten what we did. I don't remember if it was established who "we" are in this scenario last year (the hallucinated Mr Robot actually refers to us, but then he's a figment of Elliot's imagination, OR IS HE, etc), but I like the gimmick: it's discomfiting and original. What I don't like is his teenage-angst drawl, the sort of voice a 15-year-old goth affects to demonstrate how tortured he is. There are times when the show's reverent tone seems to suggest that what Elliot is saying is significant social commentary, when it comes off like run-of-the-mill stoner insight. ("People living in their loops, with their NCIS ... Isn't that where it's comfortable?") I don't know whether this is the show undermining Elliot or thinking it's more profound than it actually is. 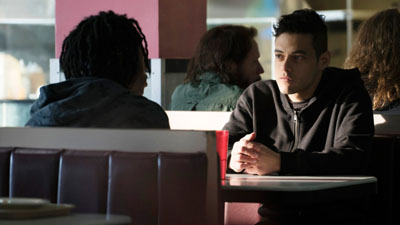 "Life is like a box of chocolates. You never know what you're going to get."
(*unsettling music*)


Mr Robot is still urging completion of the revolution, refusing to tell Elliot what really happened to Tyrell – whom Elliot might've killed last year; we're not sure – and meanwhile Darlene has taken over fsociety and is trying to stop it being hijacked by dudebros playing at it for selfies after they've sawed the nutsack off the bull on Wall Street. Here's where the ideology gets muddled: what does Darlene believe in? Anarchy and revolutionary redistribution of wealth, or is it only a desire to fuck shit up just because she knows how to work the threshing machine? Hacking tends to target the powerful, but mainly because they're the biggest scalps, the social justice manifesto a bolted-on afterthought.

It tends to forget that the victims of this are never the powerful themselves, who always have plenty to fall back on, but the people who have a smaller stake in that power. ("We made it worse, not better," Darlene admits.) The woman in the bank I mentioned earlier is finding that out: she's waited three weeks for an appointment at the Bank of E where her life savings are stashed, only to be told she can't access them or even have the amount confirmed. Who knew the fallout from radical anarchy, like any other attempt to overturn the status quo in one swoop rather than gradually change it, would hit hardest the people who can least afford it?

Well, everyone, if they were honest with themselves. We get an "Intermission" title card to bisect this two-parter, and Jeremy Corbyn turns off his Amazon Prime and ponders where to hold his next rally for maximum effect. Islington, he thinks. Yes, Islington.

More:  Mr Robot  Mr Robot Recaps  Mr Robot Season 2 Recaps  Rami Malek  Christian Slater
Follow us on Twitter @The_Shiznit for more fun features, film reviews and occasional commentary on what the best type of crisps are.
We are using Patreon to cover our hosting fees. So please consider chucking a few digital pennies our way by clicking on this link. Thanks!