There's a dog in this one. The dog is called Maxine. Who is this dog? Where is she going? Has she ever learned to love?


The dog turns up next to the basketball court where Elliot is sitting, and to a lesser extent so does Ray, played by Darryl from The Office. Maxine is a bloodhound and also a hacker, who once breached the National Chewy Bone Database to identify and target the smokiest ones, succeeding in redirecting their delivery to the pet shops of New York state and ensuring a more satisfactory chewing experience for her and her friends.

Less interestingly, Ray is a bloke who is trying to work on Elliot to start hacking again, and will probably succeed because there's not much going on otherwise. There's a very real chance Elliot's watched an Office marathon and Ray's a figment of his imagination, with Mr Robot himself providing what Elliot thinks is his benchmark for what's real and what's not, allowing Ray to sneak in undetected. (Ray wears the same clothes on both occasions Elliot meets him, which makes him prime hallucination material.) 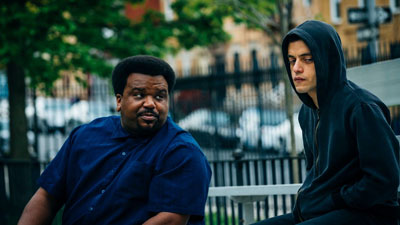 
Mr Robot is a bit like Dexter's dad now, appearing seated behind Elliot every now and then to goad him into stuff. Dexter's dad was the shittest plot device in that show; we just have to hope Mr Robot doesn't come to be a one-man announcement service for Elliot's moral compass on our behalf.

But! The opening sequence, in which one of the bankers being blackmailed in part one fulfils his obligation and burns the ransom money in Central Park, is a properly bravura piece of telly: pitch-black in its paranoid use of Phil Collins' Take Me Home in the background (a lesser show would've used In the Air Tonight, guaranteed), building to a crescendo as the flames start to rise and flicker against the fsociety mask the guy's been made to wear. It's like the KLF's performance art piece in which they burned a million quid, except it seems to actually mean something.

And OOH, MYSTERY. Tyrell's wife Joanna gets a package with a bow on and a phone in it, then later misses the call that comes, which is something the mysterious stranger never considers on telly: sure, send someone a phone so you can call them and impart one bit of information enigmatically, but what if they don't keep it on them the whole time? That's your entire plan, dingus. Send me a new phone: mine's three years old and it drags every time there's a gif on Twitter. If I have to field the odd call from a shadowy figure in a callbox wanting me to infiltrate the security system of a multinational corporation, I'll just pretend to be a Chinese takeaway and hang up. 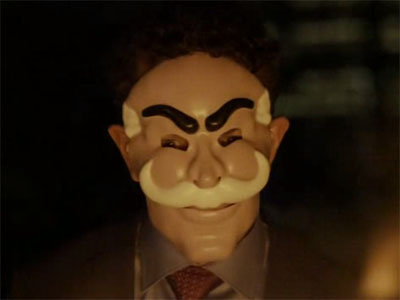 You can't smoke in Central Park anymore, but burning $5.9 million is fine, apparently.


Still, Tyrell, assuming he was the phone donor, later manages to speak to Elliot, who zones out in a church group meeting and wakes up in his mum's hallway with the phone to his ear. It turns out (or at least Hallucination Ray said it, so who knows) that Elliot's been up to stuff when he thought he was asleep, probably controlled by Mr Robot, so where he'll end up is anyone's guess. Control has been his thing: as long as he maintains the regimen, Mr Robot can't touch him, or so he thought. Is sleepwalking a lazy plot device? Arguably, but then it builds up so many layers of intrigue around the whole thing you don't really notice.

And yes yes, then Gideon gets shot by a guy in a bar, but the real question is about Maxine. Doesn't "Bloodhound" sound a bit like a hacking collective? Does Ray own her, or does she own Ray? What if dog was one of us?

More:  Mr Robot  Mr Robot Recaps  Mr Robot Season 2 Recaps  Rami Malek  Christian Slater  Craig Robinson
Follow us on Twitter @The_Shiznit for more fun features, film reviews and occasional commentary on what the best type of crisps are.
We are using Patreon to cover our hosting fees. So please consider chucking a few digital pennies our way by clicking on this link. Thanks!