Paramount have pushed back G.I. Joe: Retaliation to March 2013 just five weeks before its US release, allegedly so they can post-convert it to 3D. Join me in stroking my itchy chin, after the jump.


Though not everyone was looking forward to G.I. Joe: Retaliation as much as I was (i.e. a bit), this quote from Paramount explaining the nine month delay to Deadline wins today's prize in bullshit PR.

"
"
"We're going to do a conscientious 3D job because we've seen how it can better box office internationally. Jim Cameron did all of Titanic's 3D in post — and look how well that movie turned out."

Well, Mr Paramount insider. The very fact you would compare your movie to Titanic - the most successful movie ever made in 1997, filmed a decade before current 3D technology was available and converted to 3D after 60 gruelling weeks in post-production - tells me you do not entirely believe your own stinky lie.

Either it's true, and Paramount really are that flagrant in demanding you pay more for your ticket (let's all go and see it in 2D just to spite them), or the real reason G.I. Joe: Retaliation was delayed nine months is something more sinister. Some theories suggest it's because the movie is a bomb and needs extensive reshoots; others claim it's to flesh out a popular character killed in the first five minutes. We reckon it's one of the following reasons.
1. The Rock looked at the finished print and accidentally got it pregnant.

2. Director Jon Chu saw Iron Sky and now has to reshoot the climactic battle so that it DOESN'T feature giant swastika-shaped Nazi spaceships.

3. They forgot to put lips on Snake Eyes this time round and have to go back and add them to each frame digitally. 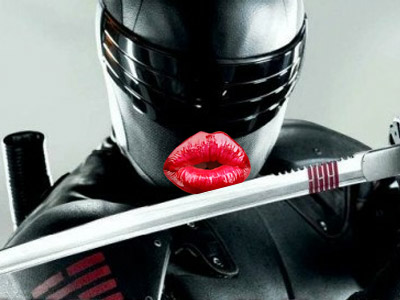 4. Star Bruce Willis is trying to get it renamed Die Hard 5 so that he doesn't have to bother making the real one.

5. The film's PR team are going to take nine months out to finally decide how to get the number '2' in the title. G.I. Joe: Re2liation? Retali2tion? 2 Joes 2 Furious?

6. Chu is filming a secret post-credits sequence in which Optimus Prime tries to recruit Roadblock and the Joes for his new Hasbro Initiative. 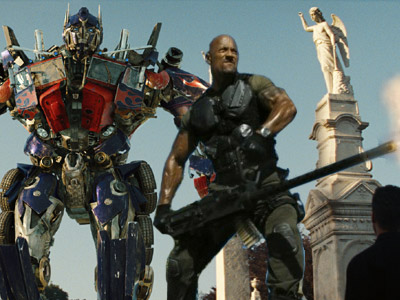 7. Arnold Vosloo wasn't entirely happy with his portrayal of Jonathan Pryce and demanded he have the chance to reshoot his scenes. "I just didn't capture Jonathan's essence," the distraught actor told fans. "I owe him - and you - better. The Pryce was wrong."

8. The SFX team are really getting into Diablo III.

9. The filmmakers realised they had a massively inferior product on their hands, and rather risk being steamrollered by The Avengers and The Amazing Spider-Man, which opens a week later, they'd cut their losses on their already costly promotion, tack an unnecessary extra dimension on it in the name of being "conscientious", shoot some additional scenes where the ninja points his sword at the audience, then release it nine months later at an inflated price in the desolate month of March, where it'll be unchallenged at the box-office by way more interesting films.
It's probably number two.

More:  GI Joe  GI Joe Retaliation  The Rock  Channing Tatum
Follow us on Twitter @The_Shiznit for more fun features, film reviews and occasional commentary on what the best type of crisps are.
We are using Patreon to cover our hosting fees. So please consider chucking a few digital pennies our way by clicking on this link. Thanks!