In Tom Hanks's new film, A Hologram for the King, he has sex with a woman. Get in, my son! It's an actual sex scene with boobs and everything. As the United Kingdom's foremost Hanksologist, it occurred to me that I hadn't seen this before. (A proper Hanks sex scene, I mean: I've definitely seen boobs. No, you don't know her; it was when I was on holiday.) So why is this?


As Hollywood's all-round Nicest Guy Ever, Hanks has always cut an oddly sexless figure. This conflicts with the archetype of the contemporary American leading man, whose role is to provide a proxy for men's wish-fulfilment fantasies of decisive agency, and to appear to women like they'd be good bunk-up fodder.

And yet he is arguably the definition of the leading man in the classical Hollywood sense: always striving to do the right thing; unflappable and good-humoured. He represents a quieter masculinity; one men would like to believe they share, not just to which they aspire. See him in Sleepless in Seattle raising a son alone following the death of his wife (a more masculine act than any number of gun-toting car chases), or pragmatically guiding the Apollo 13 back to Earth without heroics.

These traits are most in evidence, ironically, in his romantic comedies, where you'd expect he'd need to exude some sort of sexuality. Yet in Sleepless and You've Got Mail he emerges as suitable for Meg Ryan through an adherence to old-fashioned romantic values: not being interested in the casual liaisons on offer from admiring women after his radio appearance on the Dr Martha Fieldstone show, and an unwillingness to really exploit his anonymity when he discovers she's his online girlfriend (or at least reticence about what advantage he does take of it). In neither role does he display much real desire for sex; just companionship. The only time he mentions it in Sleepless is when he is riled after an argument with his son, and moreover hasn't yet got his priorities straight and is heading off for "a weekend special at the Holiday Inn" with a woman we know is all wrong for him.
So overt sexual desire for a Hanks character is part of his personality mainly when he's at his worst, before he's figured out where he's going wrong. Miscast as Sherman McCoy in The Bonfire of the Vanities (still an anomaly, his only real toe in unsympathetic character waters), he's a greedy, lustful stockbroker cheating on his wife with Melanie Griffith, and his punishment is absolute ruin. Charlie Wilson is shown as an inveterate womaniser before his War ultimately makes him a good guy, and even seeing him in a hot tub with a couple of topless socialites is a bit jarring when it's Hanks playing him. 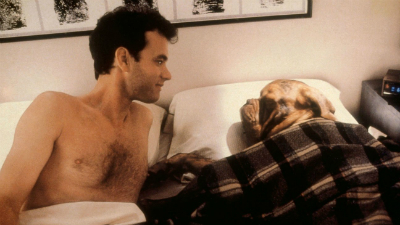 This was pretty racy though.


There have been Hanks sex scenes, but they're all qualified by comedic elements. There's some playful rolling around on a bed in Splash, Bachelor Party and The Money Pit. One in The Green Mile as relief both literal and comic when he's had his urinary infection cured. Forrest Gump has sex with Jenny but doesn't really know what's going on and is barely a consensual participant.

Splash, Big and Turner & Hooch are notable in that he has sex off screen, and is transformed by it in a romantic sense, woken from a lonely life of sexual exile (or just the natural inexperience that comes with being a teenager in a man's body), and afterwards expresses his joy like he's had a restorative tonic. It's part of the experience of falling in love, not an end in itself. And he doesn't much care for any locker-room banter about it.


When you're the uncle we can rely on to pick us up at the airport, we don't want to see you balls-deep. In a sense Hanks characters represent a trustworthy stability because they don't present a sexual threat or seem liable to act on their basest instincts. Men driven by sex are volatile, acting irrationally; showboating and going off the deep end. Hanks characters might flounder a little bit initially, but ultimately get their shit together.

His sex scene with Sarita Choudhury in A Hologram for the King (an even stickier wicket when you consider it involves her public nudity in Saudi Arabia, where he is a guest and you might have heard that doesn't go down so well) is a sensitive one, initiated entirely by her after some respectful courtship. But it still seems anomalous; even more so for being juxtaposed with one of classic Hanks decency earlier on.

Finding himself at a party of bacchanalian excess in a Jeddah nightclub, a hedonist oasis in the desert, he is seduced by a Danish woman he's met earlier and they end up on the cloakroom floor. After a bit of fumbling he stops her, saying they've only just met. They are both single, it's been established that this party is an environment in which you can do pretty much anything, and sex would be uncomplicated, guilt-free and harmless. And yet he won't do it, because a Hanks character doesn't act on his urges. If he did, he'd reveal himself as weaker; more shallow, not the man you've come to rely on. And if we can't rely on Tom Hanks, we might as well all go home.

More:  Tom Hanks  A Hologram For The King
Follow us on Twitter @The_Shiznit for more fun features, film reviews and occasional commentary on what the best type of crisps are.
We are using Patreon to cover our hosting fees. So please consider chucking a few digital pennies our way by clicking on this link. Thanks!