Modern movie posters suck ape testicles, but our generation isn't the only one who have had to put up with sub-standard movie advertising. The horror! And they say nurses have it tough! 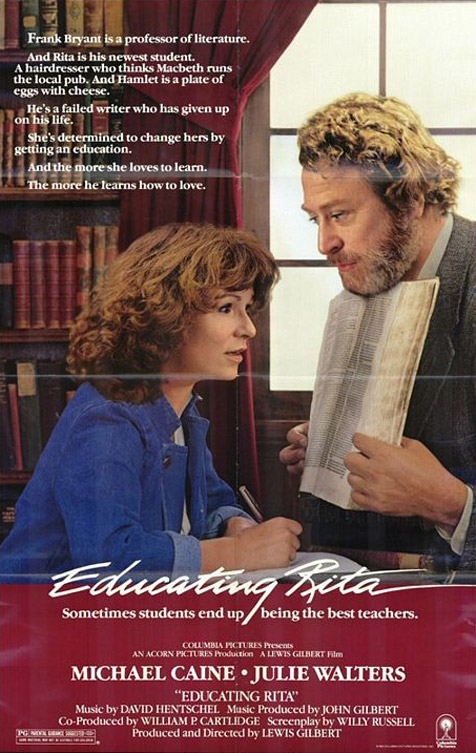 Back in '83 (remember the last episode of M*A*S*H and the Granada invasion?) Educating Rita was considered hot Oscar property, with two awards-nominated turns by lead actors Michael Caine and Julie Walters. Can we agree that neither actor won because the movie's poster was so utterly fucking horrible? Good: because it's true.

Where to begin? How about SIX lines of tagline to begin with. "A plate of eggs with cheese?" What the fuck? I'll wager that at no time ever in the history of the universe will those words on a movie poster ever be contextual or relevant. By the way, having the phrase "learns to love" on a poster is just not done. Even Katherine Heigl would balk at that one.

Graphically it's a total turd. I'm not sure whether the Julie Walters bobblehead is looking directly at Michael Caine's book-beard or through his hollow soul. At any rate, why is he staring at her forehead? Why he is holding the book up for her to read? Wouldn't his arms get tired? Why is she writing with two hands? TOO MANY WHYS.

More:  Old Movie Posters Suck Too  Educating Rita  Michael Caine  Julie Walters  Posters
Follow us on Twitter @The_Shiznit for more fun features, film reviews and occasional commentary on what the best type of crisps are.
We are using Patreon to cover our hosting fees. So please consider chucking a few digital pennies our way by clicking on this link. Thanks!