At which point I tweeted about it, effectively ruining any future attempts to flesh the thought out into a feature. Pretend I didn't.


Despite the fact that Google's AdSense service places me in the 18-24 age bracket (which throws its insistence on bombarding me with mature dating adverts into fairly sharp focus), I am in my early thirties. As such, I spent my teens watching The Fresh Prince of Bel-Air at 6pm every day after school. Like you, I was always drawn in by its full and unflinching commitment to its premise, in which a hoodlum from the streets moves in with his rich relatives and struggles to fit in. It was on this foundation of truth that it wove its intricate narrative web.

Then something occurred to me on a snow-dappled train home tonight which spoiled it. Have you ever seen the full, 110-second version of the opening credits? It contains two extra verses which flesh out Will's journey from Philadelphia to Bel-Air. Here it is.

In light of this, now watch the abridged version that was always played on BBC2 broadcasts, and still is when it's repeated on Viva today.

Here's the problem: as well as the absence of his pleas to his mother for leniency, which makes even more poignant Will's sudden relocation from his family unit, the song - and this is crucial - cuts out the fact that he is given a ticket and gets on a plane.

So instead, upon being told: "You'll move in with your auntie and uncle in Bel-Air", Will immediately whistles for a cab, and when it comes near, the licence plate says "Fresh" and it has dice in the mirror. Leaving aside for a moment the more mundane details of the vehicle itself, we are being told that Smith took a taxi from Philadelphia to Los Angeles.

For those of you unfamiliar with US geography, the image below demonstrates the length of this journey. 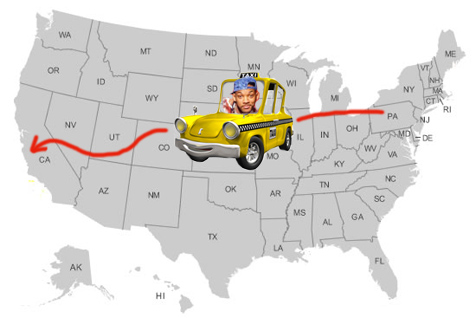 As you can see, this is plainly horseshit. Were we supposed to believe that Will, a kid from the projects, could afford to pay the taxi fare for a journey that Google Maps estimates at 2,711 miles? The US taxi rate chart at taxifarefinder.com estimates a Philadelphia cab to charge an initial fee of $2.70 and then $2.30 per mile thereafter, which would bring Smith's overall outlay to $6,238, not even taking into account the overnight accommodation and fuel costs. Admittedly I haven't adjusted this for inflation since the early 90s, but it's a preposterous sum nonetheless.

We were being fed this baloney for years and we swallowed it. All the while I believed in the Fresh Prince, never once stopping to think, "Wait a second, this kid's not poor. This classic fish-out-of-water tale is nothing of the sort. If anything it is more closely allegorical of a fish in water, and very pleasantly warm water at that." At any point they could've played the full introduction and added some much-needed clarity, but they chose not to.

Sorry if this spoils your Friday. I invite you to join me in spending it trying to contact Will Smith to demand answers.

More:  The Fresh Prince Of Bel-Air  Will Smith
Follow us on Twitter @The_Shiznit for more fun features, film reviews and occasional commentary on what the best type of crisps are.
We are using Patreon to cover our hosting fees. So please consider chucking a few digital pennies our way by clicking on this link. Thanks!