Opinion piece: Why the Academy are racist for snubbing Selma

Guests of the Academy - overwhelmingly white, overwhelmingly male - took their seats at the opulent Dolby Theater in California to witness the announcement of the nominations for the 77th Oscars. When they were over, they continued chewing on their steaks and clinking their champagne glasses, oblivious to the racism hanging heavy in the air: Ava DuVernay's astonishing drama Selma, a biopic of Martin Luther King, had been snubbed - proof positive once and for all that the Academy is institutionally racist.


Okay, you read that first paragraph and cared enough to click past the jump, so I'm going to level with you: I didn't come up with the idea for this article, my editor made me write it. He was standing over my shoulder while I wrote that first paragraph, but now he's sat down at his desk and I have to make it look like I'm still working, so I'm writing this instead. I have no idea what I'm going to write. Shit, he's looking at me. Better keep typing. Blah-de-blah-de-blah.

Is the Academy racist? Fucked if I know. Instead I'm going to talk about my favourite movies of the year because it's the only thing I can think of to write. I really liked Dumb And Dumber To. Edge Of Tomorrow was pretty awesome I guess. Oh yeah, and Dawn Of The Planet Of The Apes was brilliant. I wish I could be writing about Dawn Of The Planet Of The Apes. I didn't see Selma because it looked kind of depressing.

I wiki'd 'Selma' and 'Ava DuVernay' and also 'Ferguson' at my editor's suggestion (???) but didn't get very far. Then I tried searching for some key words on Twitter and BOY was that a mistake. Everyone is hella angry about this so I guess it's kind of important? But then I read that Selma WAS actually nominated for Best Film so I was all like :/ has everyone got it wrong? Also to the best of my knowledge (thanks Wikipedia!), the Academy is made up of about 7,000 people, so the idea that they could organise a 'snub' in the acting categories seems kind of far-fetched. Like, maybe the actors who DID get nominated were just liked slightly MORE than that David Yolo dude who played Martin Luther King. I don't know man, I'm just the intern.

Better throw a picture in too, just for the aesthetics. That'll kill some time. 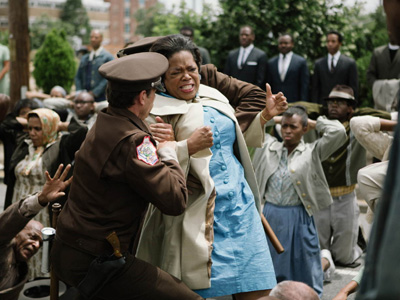 Pretty sure this is the right film. It seems like Oprah would be in this.

Boss just threw a glance at me there and smiled. I have no clue what I am going to do at the end of the day when he asks me for the finished article. I just have to hope he reads the first paragraph, skims the rest and assumes it's all good. It's not like he ever reads past the headlines anyway. Pretty sure my editor doesn't really think the Academy is racist either, he just made me write this because it would get clicks.

If the Academy were so racist, how come they gave Denzel Washington that Oscar for Training Day 14 years ago? That's an amazing movOH SHIT HE'S COMING

you only have to look at the breakdown of the Academy's voters to see that racism is endemic in their organisation. Anyone who saw Selma will testify that it is firebrand cinema, the kind of daring movie that demands to be recognised by the industry. Shame on you, Acade

Okay, I think I'm going to finish up now. I really, really want this job. Thanks for reading. Sorry if you wanted to read an actual article about racism. I'm not really qualified to give my opinion. My bad. Seeya!

Without a shadow of a doubt, this constitutes conclusive evidence that Ava DuVernay's powerful movie Selma has been the victim of a cruel snub by an organisation whose white roots run beneath the entire industry, suffocating black voices and ensuring they'll never be heard.

More:  Selma  Truthul Posters  David Oyolewo  Martin Luther King  Racism  Steve The Intern
Follow us on Twitter @The_Shiznit for more fun features, film reviews and occasional commentary on what the best type of crisps are.
We are using Patreon to cover our hosting fees. So please consider chucking a few digital pennies our way by clicking on this link. Thanks!