Parliament of House: part one

House: it's been around for eight years, and while no one ever speaks about it in the same terms as the 'worthier' US output, there are at least two of us who would rank it among our favourite shows of all time. With the series finale about to hit Sky 1 on Thursday, we thought we might as well have a bit of a chat about it.


Ed: How long did it take before you stopped thinking: "Shit, that's Hugh Laurie. Soupytwist"?

Matt: Y'know, it took me a long time to disassociate House from Hugh Laurie Of Old. I started watching the show from the beginning just after the third series had started to air so was already aware of House being an 'exciting new character' but I've grown up watching Blackadder, Jeeves & Wooster, A Bit Of Fry & Laurie, etc so it took me a good 20 or so episodes before I stopped thinking "Wow, Hugh Laurie's yank accent is really good" and just accepted the character for who he is.

I still can't connect the two now though. I can't see how House is the same guy as the Prince in Blackadder The Third. It's like watching Saving Private Ryan and equating Captain Miller to Josh from Big. It just doesn't compute for me.

Ed: Yeah, you're right: I never think of Bertie Wooster when I'm watching House. A lot gets made of the accent but that's just the bare bones of it. (And from what I've heard it's commonly understood among British actors heading to Hollywood that the Americans have a tin ear for it anyway: no one ever calls you on it as long as you can do 'basic American'.) Disassociating yourself in the audience's mind from other popular characters you've played is damn near impossible unless you create someone completely new from scratch, which is what he did.

And the weird thing is, I didn't particularly think of Laurie as an actor at all up until House: more of a comedian, sketch artist, that sort of thing. But he's an amazing one, as it turns out. 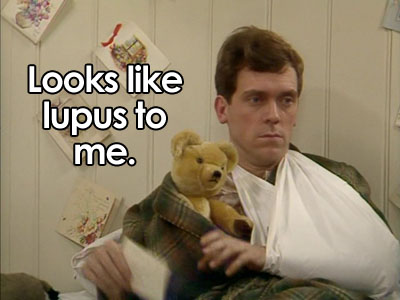 Matt: After it finishes do you think he will or can ever go back to doing more zany comedy or do you think he'll always just do a slightly different version of House?

Ed: I wouldn't be surprised if he doesn't do a lot more acting. He'll make a few more shitty blues albums and probably direct a bit; he seemed to get a kick out of the two episodes he did. Depends whether he has the appetite to throw himself into acting as much again.

Thing about House is it's a formulaic show for sure, but it never quite went stale. I think the first time I realised this wasn't just a meat and potatoes medical drama was in about the third episode of season one, where he condemns a baby to die because it statistically means a better chance of a load of other babies living. That total logic approach was the freshest thing about it: we'd never seen that before.

Matt: Yeah, absolutely the most refreshing thing about House is its refusal to stick to the usual happy story endings. In fact, characters make the wrong choices all the time and are called out on it. Not only with stuff like Chase's epic execution of that dictator fella (still amazed he 'got away' with that) - or House being an ass when he should just shut up - but with the patients too. Quite often, episodes end with couples breaking up or someone doing something selfish - they're always actions that make sense to the character, instead of them learning to become a better person and living happily ever after. 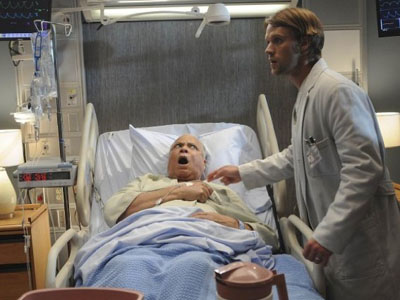 Matt: I'm still a little sore over the whole Cuddy thing though. I really felt that, for a long time, she represented House's potential to be happy and when they got together, that was fine. But to carry on after she left seems like they've missed out on the opportunity to end the show at the right time. Whether it should have ended with them together or not, I think she was too important for them to carry on for just one more season without her. Now it seems like they've overcooked the show a little and have had to struggle to find a decent storyline to end on.

Don't get me wrong, this Wilson thing is obviously an epic story to finish on, but it just seems a little rushed to me. For a show that has pulled out some of the best season finales ever (House being responsible for Amber's death, hallucinating a night with Cuddy, etc), I can't help but worry that the show finale won't live up to expectations.

Ed: You were on Team Huddy? (That might be a thing I just made up, to be honest.) No, I was dead against House and Cuddy getting together; didn't think it worked at all. Some interesting new ways for him to be socially awkward, but other than that I thought they were trying to have their cake and eat it with the scripts: have them in a relationship like had always been suggested, but also have him being an irascible bastard at work. No, I was delighted when he ram-raided her house.

Matt: I wasn't so much Team Huddy (it's a thing - I'll go with it), but I always thought it was a possible ending to the whole show, whether they got together or not. I'm kind of agreeing with you in a way in that I'm saying they should have never explored what it was like when they were actually IN a relationship, but their whole 'will they/won't they' thing seemed like a perfectly good storyline to end the show on. Once it happened, and we saw it, and then it failed, it just seemed like the show got winded a little bit.

Ed: How important do you think the supporting characters have been throughout? Obviously it wouldn't work if it was just House on his own, but have they mainly been fodder for his barbs or contributed towards the series in their own right?

Except Masters, who doesn't count. 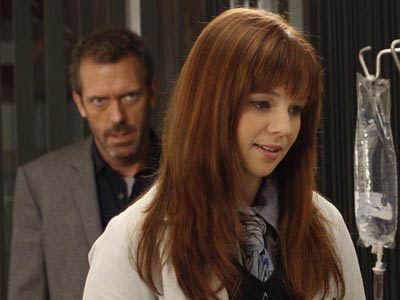 Matt: Gotta say, I'm not overly taken with any of the supporting characters (apart from Olivia Wilde, natch). They all just seem to represent chances for House to pick on them. Attractive young woman, geeky Japanese nerd, straight-laced black guy, adulterous ugly fella, etc. The only ones that have had anything remotely resembling character development is Chase and Thirteen. Even Foreman, despite getting a massive promotion, is still the same old stick-in-the-mud that he always was. In fact, even Wilson is exactly the same. It works though - the only character development we should care about is House's, and it's his teetering on changing as a person that keeps everything interesting.

Ed: Yeah, Foreman always seemed like a missed opportunity to me. There was always potential in the early seasons for more with him - when he seemed to be turning into House and couldn't decide whether he wanted to or not (remember in season one when they had the same trainers?) - and that was quite interesting. Plus when he was going off for jobs elsewhere but no one would touch him because he was "House Lite". Then he literally did nothing for three seasons. THREE.

Chase is much more interesting, though, and you wouldn't have thought that necessarily when it started. If anyone's going to actually take on House's legacy (ie in a spin-off series) after they all get hit by an asteroid, it'll be him, because he's totally grasped the whole dispassion thing, and now treats diseases, not patients. 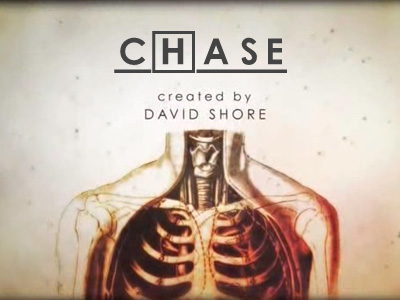 Matt: Korean? I was just making general character stereotypes up rather than referring to any actual characters. You're clearly the one who is the massive racist.

In part two we'll get out our stethoscopes and look at the medicine of House, and make woefully inaccurate predictions about the series finale.
More:  House  Parliament Of House  Hugh Laurie  Sky 1  FOX
Follow us on Twitter @The_Shiznit for more fun features, film reviews and occasional commentary on what the best type of crisps are.
We are using Patreon to cover our hosting fees. So please consider chucking a few digital pennies our way by clicking on this link. Thanks!